Although it doesn’t come cheap, the Eufy Dual is one of the best video doorbells we’ve tested this year.

For a (mostly) porch pirate-proof video doorbell that nails both the basics and more advanced features, it’s hard to beat the Eufy Dual Camera Video Doorbell, expensive and sizeable though it may be.

After months – months – of trying, you finally manage to find a PlayStation 5 online that didn’t sell out in two minutes. You checkout as fast as humanly possible, then spend the next few days daydreaming about all the hours you’re going to sink into Elden Ring. While you’re at work, you get that long-awaited notification – your PS5 has been delivered! You rush home at the end of the day and run up the driveway, arms outstretched, only to find nothing on the doorstep. After checking out other potential drop-off spots, you call the courier company, who assures you it was safely delivered and even sends you the courier’s photo of the box at your front door. You soon come to the realisation that your precious, eagerly-awaited console was stolen by heartless porch pirates.

Okay, so this exact scenario might not have happened to you, but sadly, package theft has become increasingly common across Australia (and the rest of the world) in the past few years. And, as many victims can attest to, claiming compensation for stolen parcels can be extremely difficult.

It’s this problem that the Eufy Dual Camera Doorbell aims to address. Though it may not be possible to prevent porch pirates altogether, having an extra eye (or, in the case of the Eufy Dual, two) can make finding the culprit – and your lost goods – that much easier. But just how good is it in practice? We put it to the test.

Depending on video quality and the kind of features you’re after, video doorbells can set you back anywhere between $150 for a basic model to $500 for one with all the (door)bells and whistles. Eufy has a few different video doorbells on offer, but the Eufy Dual is its flagship model, with a flagship price to match. Retailing for $449.95, it’s one of the most expensive video doorbells on the market.

On the plus side, there are no monthly fees necessary to unlock advanced features, and since the Eufy Dual comes with a Home Base with 16GB of local storage, you don’t need to fork out for cloud storage either. Considering the fact that Ring and Google Nest essentially require you to pay for their subscription services (from $4.95 per month and $9 per month, respectively), it’s worth factoring those savings into the cost.

In addition to the Eufy Dual Camera Doorbell unit itself, in the box, you’ll also find a Eufy HomeBase 2, which acts as both a doorbell chime and local video storage for the Eufy Dual (as well as any other Eufy security cameras you might have). 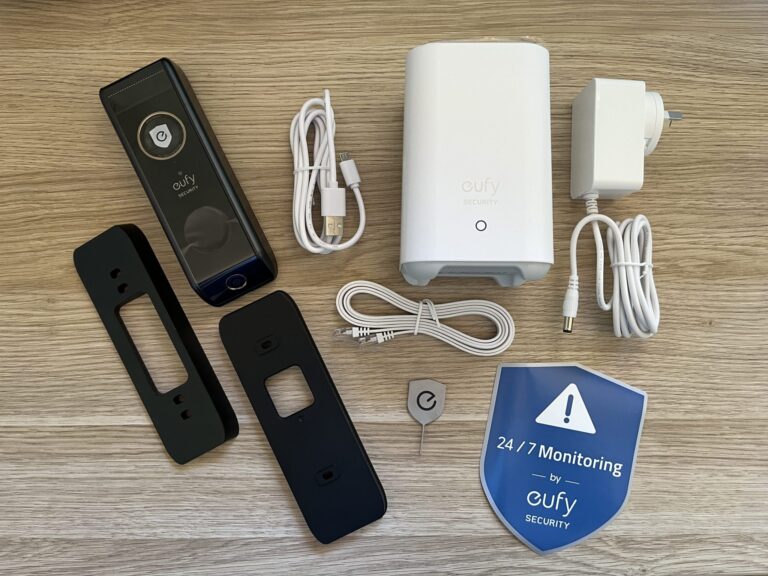 You also get mounting brackets (one straight, one angled), a charging cable for the Eufy Dual, a pin to help you remove the unit from the mounting bracket for charging, a power brick for the HomeBase 2 and an Ethernet cable to connect it to your router.

The first thing you’ll notice about the Eufy Dual is that it’s big. Like, really big. It wasn’t an issue for me personally, but if you’re after something a little more subtle, this isn’t the video doorbell for you. That said, given this thing has not one but two cameras, the added heft is mostly forgiven.

Installing the Eufy Dual is easy, if not the most renter-friendly process in the world. Unless you want to try super-strong double-sided tape or Command strips and risk the whole doorbell being stolen, you only have one choice, which involves making a few holes. In my case, that meant drilling into brick, which wasn’t ideal, but was easy enough and ensured no one (except maybe the Hulk) can pry the doorbell from its spot and flee. 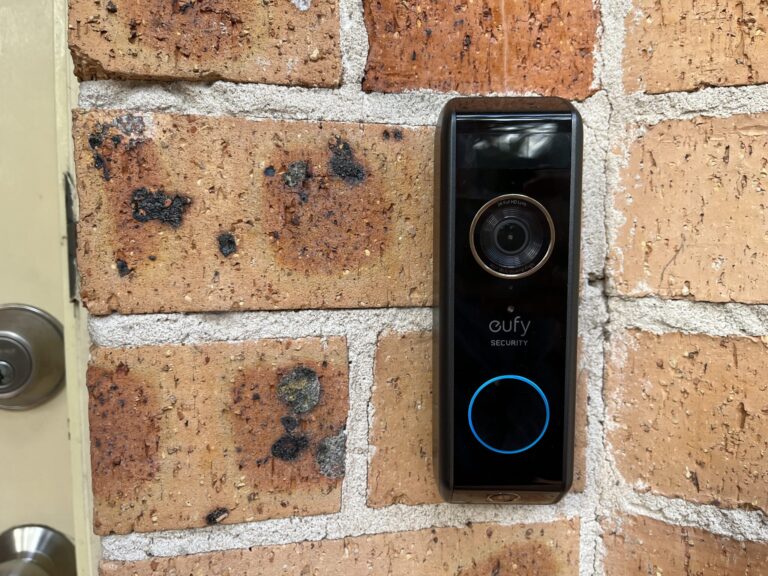 The doorbell comes with all the screws you need, as well as the mounting bracket and a stencil to help you drill the right-sized holes in the right places. There’s also a mounting wedge which you can use to angle the doorbell slightly if need be.

Installing the HomeBase 2 is as simple as plugging it into a wall outlet and connecting it to your router via the included Ethernet cable. From there, download the Eufy Security app, follow the prompts and you’ll be set up in no time.

The Eufy Dual is one of only a few video doorbells that includes two cameras–one in the usual front-facing position to show visitors, and one aimed at the ground to show deliveries. The primary front-facing camera records in 2K video quality with a 160° field of view, while the secondary camera records in HD with a 97° field of view. Both offer a crisp, clear picture with broad coverage of your front door area and a higher (and therefore smoother) frame rate than you’ll find on other video doorbells. The black-and-white night vision is decent, but certainly not on par with the clarity you’ll see during the day. 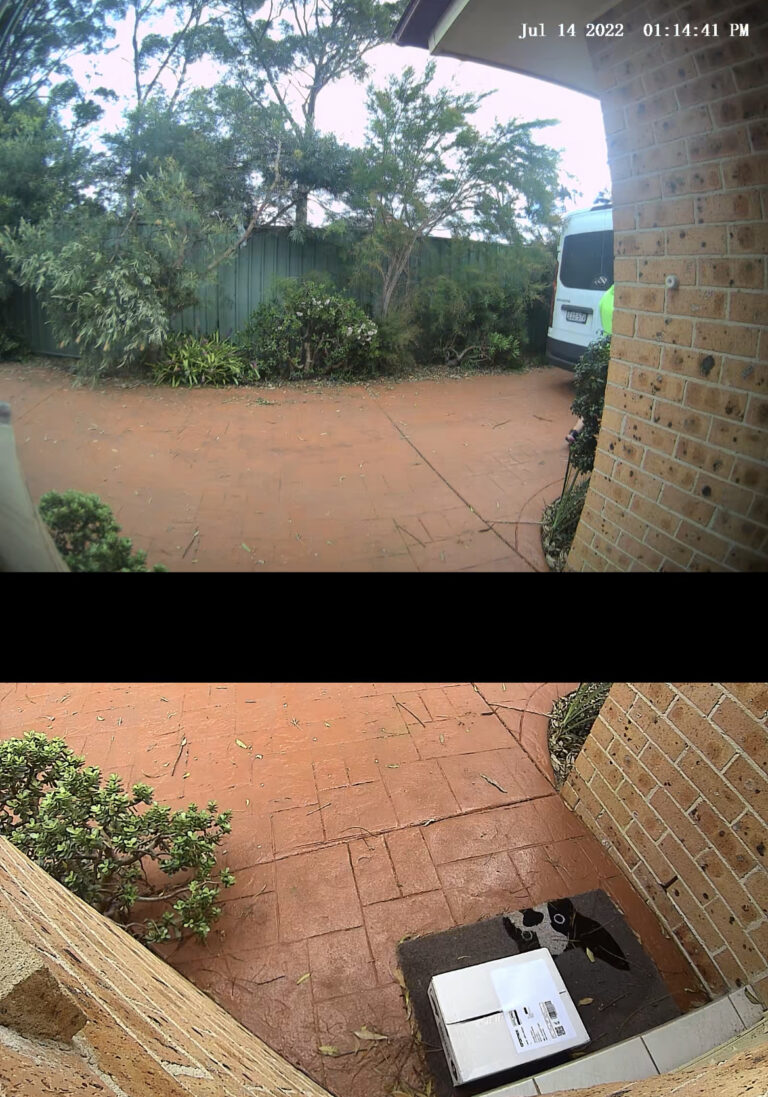 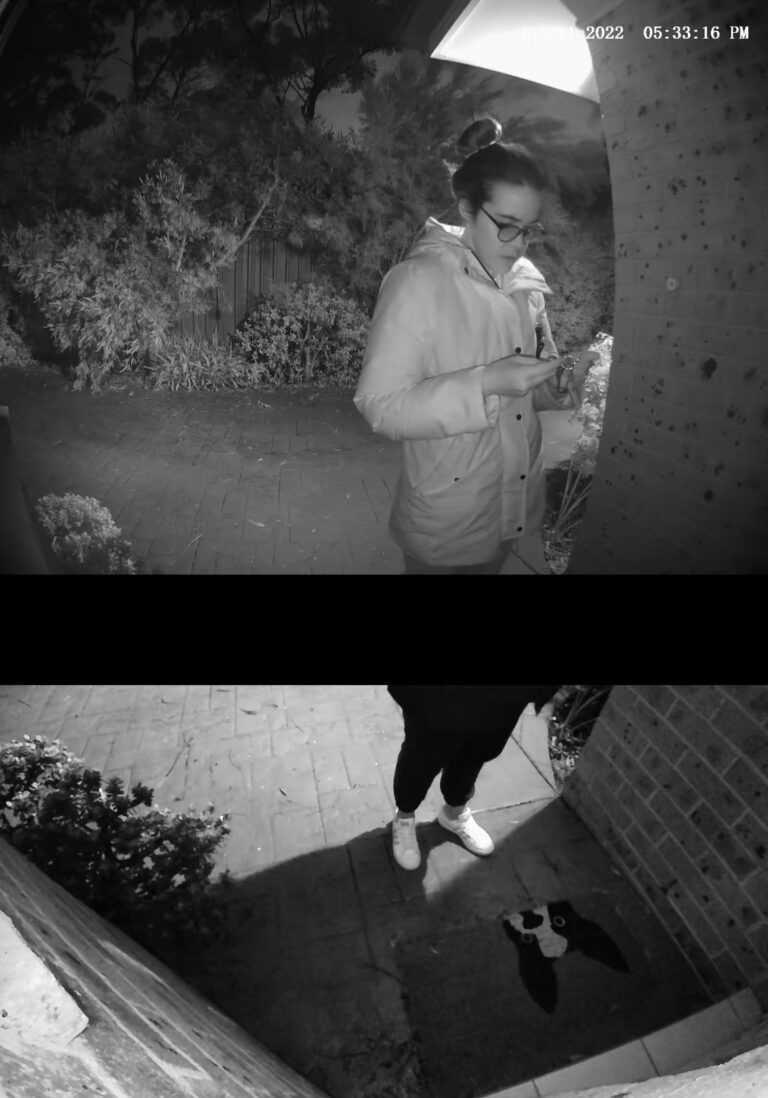 In the time we tested the Eufy Dual Camera Doorbell, Mother Nature certainly threw all she had at us–torrential rain, gale-force winds, and freezing temperatures. The doorbell came through completely unscathed, which is what we’d expect given its IP65 rating, and the rain and debris from the wind didn’t significantly impact the video quality either.

Each event–whether it be a visitor or a parcel delivery–is recorded in 15-second clips accessible from the Eufy Security app. That’s also where you can set up your preferred notifications (we found the motion detection notifications to be a bit much, so switched to doorbell rings only) and adjust motion sensitivity and familiar faces.

During our testing, we found very little delay between the doorbell being run and the notification appearing on our phone, however, as is the case with most video doorbells, waiting for the encrypted live feed to load can slow things down considerably–particularly if you’re not connected to the same Wi-Fi network as the doorbell. It’s not the slowest we’ve ever seen, but in the case of authority-required deliveries, it could mean the difference between getting your package right then and there or having it redirected to a nearby pick-up spot.

For those bent on turning their castle into the ultimate smart home, you’ll be pleased to know The Eufy Dual Camera Doorbell is compatible with both Google Assistant and Alexa, though unlike many other Eufy Security products, it doesn’t offer Apple HomeKit support.

It’s a shame the Eufy Dual Camera Doorbell is as expensive as it is because aside from the price (and a few minor quirks), it’s got just about everything you could need in a video doorbell and more. The second camera is a genuinely useful addition, the advanced features are seriously impressive, and better yet, you don’t have to fork out extra for them–or storage, for that matter. Still, we certainly wouldn’t blame you for waiting for a sale before hitting ‘add to cart’.