The Google Nest Cam (battery) is feature-packed and intelligent, albeit with a few small caveats.

The Google Nest Cam (battery) is easy to set up, easy on the eyes, and boasts great battery life. There are a few key flaws, but overall, it's a solid piece of kit for home security newbies.

Installing a home security system used to mean electricians and hardwiring, not to mention a high price tag - but thanks to smart devices monitoring your home doesn’t have to be complicated. And you don’t have to call anyone to help you set it up either.

The Google Nest Cam (battery) can be set up indoors or outdoors, and only needs a WiFi connection and two screws to install. It is one of the simplest systems to navigate, but setup might be difficult if you’re already part of the Nest ecosystem.

In Australia the Google Nest Cam (battery) costs $329, but you can almost certainly find it cheaper. At this price the Nest Cam sits in the premium price bracket for wireless cameras, but if you want full coverage the costs don’t stop at the device itself.

As is, the Nest Cam comes with three hours of event history for free, but if you want 24/7 footage, or to store events for up to 60 days you’ll need to pay a monthly fee for a Nest Aware subscription.

Within the subscription, you’ll be able to add facial recognition, which means that any events with members of your household’s faces won’t be saved to history. For the most part, this facial recognition technology works well, and it will stop you from getting persistent push notifications when your spouse is hanging laundry out. You’ll also be able to store up to 60 days worth of event history on the cloud, which is perfect for those who spend long stints away from home.

Google has two subscription tiers for Nest Aware - here is how they stack up.

The Nest Cam comes with the camera itself, a magnetic plate, a wall plate with screws and anchors for installation, and a charging cable.

All you’ll need is a drill and a screwdriver to install the system either indoors or outdoors.

The hardest part about installing the Google Nest Cam is deciding where you want to position it. In the box you’ll get almost everything you need to install the camera, including the perfect sized screws, and wall anchors if you’re putting it into brick or stone. Note that no matter what surface you’re installing on, you’ll need to drill pilot holes as the screws aren’t self sinking.

Putting up the mount took less than five minutes, and after that you just snap the magnetic camera directly to the plate. It holds strong, and allows for small adjustments in a way that a mechanical hold wouldn’t.

When the install is done, you can set up the tech itself. In the most general terms, the Google Nest Cam has a simple setup but there is a well documented flaw that Google is yet to find a solution for. 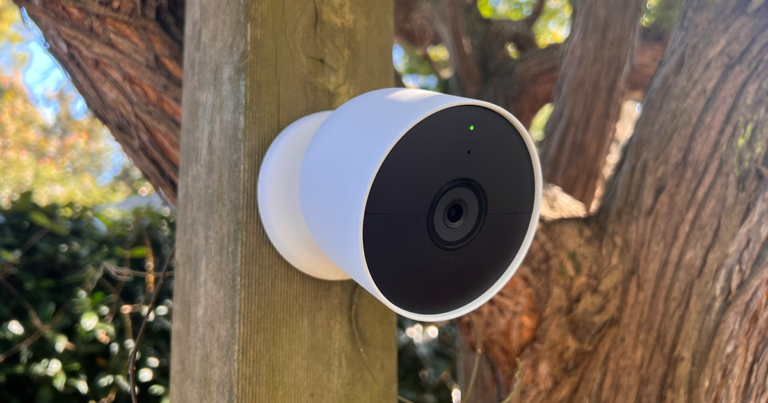 When trying to add the camera to my Home, the app simply wouldn’t let me. It didn’t recognise that the camera was there at all. Google doesn’t offer any solutions to this problem, but according to forums you need to remove all your other cameras from your Home and then start again from scratch. This makes the usually smooth setup process immensely more difficult.

I didn’t follow this advice however, I just created a new Home and set up my Nest Cam as a separate entity. For the purposes of this review that worked just fine, but it does mean that if I was so inclined I would have to pay for Nest Aware twice in order to get footage from both cameras.

Google will inevitably fix this bug, but for now it makes the Cam setup frustrating for Nest users. So much for loyalty hey?

Once I started my new Home however, connecting the Nest Cam took a couple of minutes. Using the Google Home app, I paired the device with my account and had it working in a snap.

True crime junkies would know that security footage is notoriously poor, but with the Nest Cam I'm confident that it wouldn’t take two women with a podcast to find the perp if something were to happen on my property.

On the box, the video quality is 1080p which isn’t the highest of high definitions but is good enough to see faces. Obviously the closer the subject is to the camera the better shot you’ll get, but during the day you’d get a good shot to help identify any potential intruders. 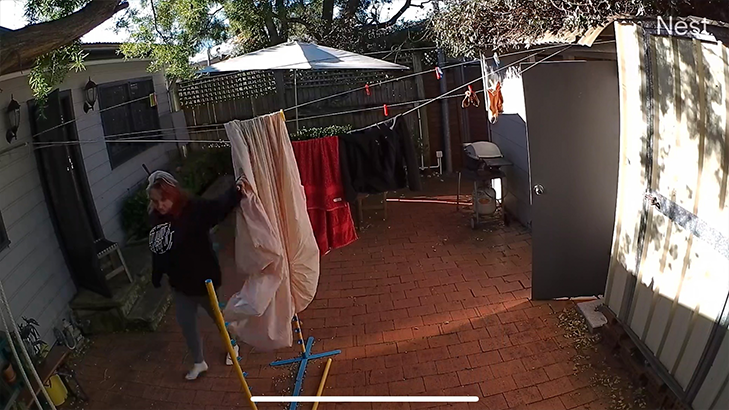 When the light gets low enough, night mode kicks in and even then the image quality remains solid. Some details get lost, as is to be expected but the black and white image will still give you something to work with. 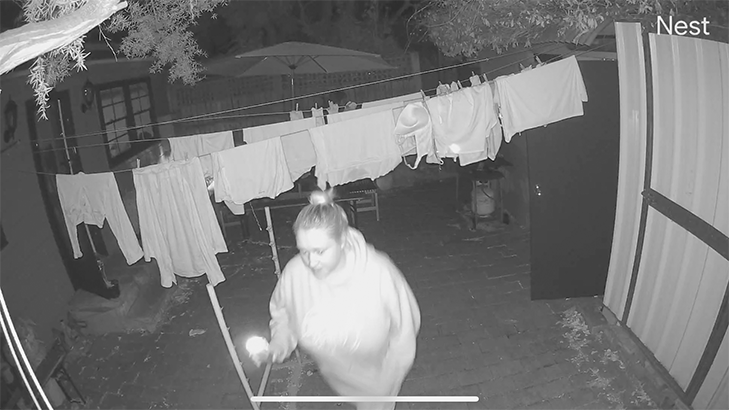 Unfortunately you can only access your footage from your smartphone or tablet, so you are limited by how much detail you can derive from the image. The shots above are screenshots from my smartphone, but if I were able to grab these screenshots from a desktop sized screen then you would be able to see more detail.

The Cam itself only comes with the most barebones features. You’ll be able to view events up to three hours after they happen, but if you want anything more you’ll need to pay for a subscription.

As for battery life, depending on usage, the Google Nest Cam will last around eight weeks between recharges.

We took a look at Nest Aware pricing earlier in this review, and the subscriptions are pretty reasonable if you have multiple cameras. For comparison, Arlo Secure Plans start from $4.49 per month for one camera, or $14.99 for multiple cameras. For the price you’ll get a similar set of features to Nest Aware, but you won’t be able to set up facial recognition. At the top end, Arlo Secure Plus goes for $21.99 a month.

Here are how the two base subscriptions compare:

If you’re just setting up your home security then the Google Nest Cam is a good buy. It is a simple piece of hardware that is easy to install, and that you can keep tabs on from anywhere in the world. Although it is at the pricier side of the spectrum, the higher frame rate and out-of-the-box history storage means that you don’t need to pay anything extra if you spend most of your time at home.

However, if you’re a jetsetter and are looking for some peace of mind while you’re away, then be aware that the price of the camera itself isn’t the only price you’ll pay.

Although the Nest Cam is perfect as a starter piece of security tech, if you’re already ingrained in the Nest ecosystem I implore you to wait until Google sorts out some bugs.