Wyze keeps its pricing and packages very simple. You need at least one Wyze camera and the Wyze Sense Starter Kit for your initial setup, then you can add on sensors as you wish (up to 100). The smallest number of contact sensors you can purchase is a four-pack, but at less than $5 a sensor, they're about 75% cheaper than other DIY sensors on the market, like sensors from SimpliSafe and SmartThings.

Keep in mind that unlike many other DIY systems, Wyze is a self-monitored system, so there are no monthly fees or contracts. But that also means that the only alert you'll get that a door or window has been opened will be on your smartphone. The contact and motion detection sensors aren't tied to any external alarm to scare off intruders, and there's no call center keeping an eye on things while you're away.

The first thing we noticed about the sensors was their size: they're tiny! Each contact sensor is only about 1 inch square and 3/10 inch thick, making them both inconspicuous and versatile. The motion sensor is a 1 x 1 x 1/2 inch box. Each sensor runs on replaceable lithium coin batteries (included) that Wyze says will last about 12 months with regular use. Red indicator lights on each contact sensor illuminate whenever a door is opened or closed—same for the motion sensor when motion is detected.

Unlike other systems that require a hub, Wyze uses a bridge—which is also very small—that plugs into the back of your Wyze Cam or Wyze Cam Pan. The bridge communicates with the sensors using radio frequencies, and it lets the sensors use the camera's connection to your Wi-Fi to send signals to the app without using up a lot of power from the sensors themselves. This means that the batteries in the sensors will last longer than other sensors on the market that connect directly to your Wi-Fi.

The motion sensor works using radiant heat, so it will detect people and pets without giving you false alarms from passing cars or lights turning on and off. The bad news about this kind of motion sensor—and about Wyze products in general—is that none are designed for outdoor use, so if you need exterior coverage you'll have to look elsewhere. Wyze has announced plans for outdoor cameras sometime in 2019, but so far no word on outdoor motion sensors or other products we'd like to see in the Wyze lineup, like motion sensor lights. 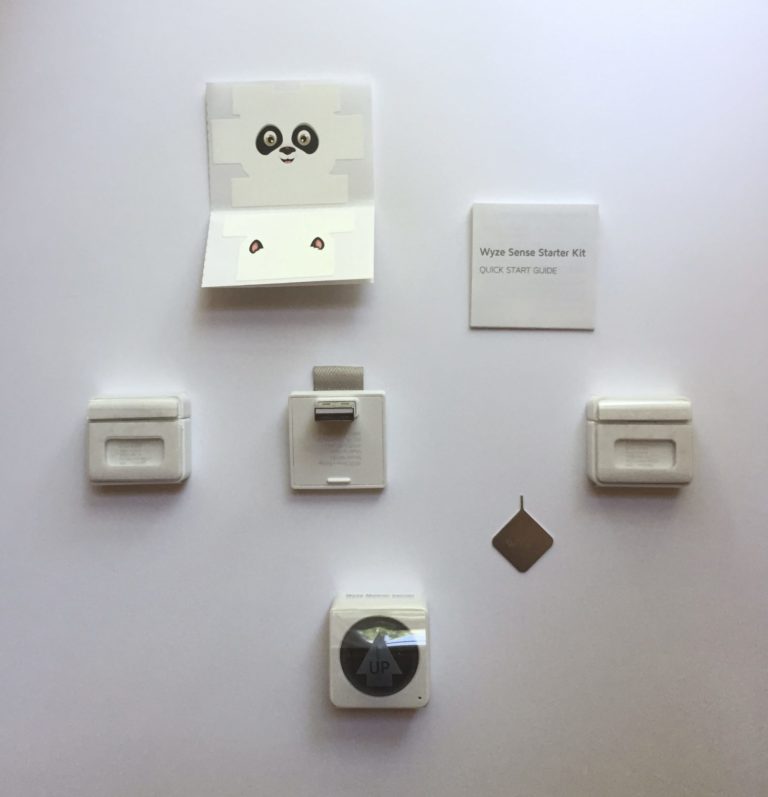 What’s in the Box

One of the reasons Wyze sensors are so small is thanks to their proprietary communication protocol that uses an entirely different language (radio frequency) than Zigbee and Z-Wave devices. Unfortunately, this special language means they can't communicate directly with any other non-Wyze smart devices in your home.

While this shortcoming means Wyze probably isn't the best smart security option out there, the good news is that Wyze is designed to work with IFTTT (If This Then That), Amazon Alexa, and Google Home. You can use these platforms to create scenes that incorporate your Wyze sensors with your other compatible devices to create a smart home. The bad news is that it might not always work with those platforms. We tested a Wyze IFTTT applet that’s supposed to use geofencing to "turn off push notifications when I am home," but we continued to receive push notifications even when inside the geofenced home area.

Many of the other IFTTT applets do the same things you can already do through the Wyze app, like getting push notifications when motion is detected, so they're a little redundant. But we do like the ability to use your Amazon Echo Dot or Google Home to enable or disable motion detection with voice commands when you wake up or leave the house.

Installing the Wyze Sense Starter Kit was a breeze. It took only about 10 minutes in total to set up all three sensors, and it was so simple even a child could do it. The only tool you need is a tiny pin device used to power on each sensor.

The hardest part of installation was deciding where I wanted my sensors to be. Since I already have a security system covering my doors and windows, I decided to have some fun with the little Wyze sensors. I put one on my refrigerator door, and one on the bedroom door of my hermit teenage son, so I could be alerted when he emerged from his cave. Each sensor has a peel-off adhesive backing to make it easy to attach to any surface. 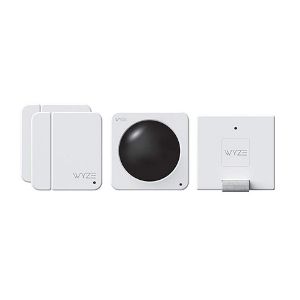 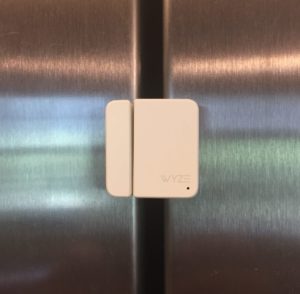 Unlike my current security system that only alerts me that a sensor has been tripped (e.g., "Alert: Back Door") the Wyze app tells you whether a contact is open or closed (e.g., "Back Door Closed"). The app is well thought out, with customizable push notifications that let you determine which events trigger an alert, like when a door opens, when it closes, or when it's been left open longer than a specified amount of time. The app storage keeps a history of all recent activity, with the most recent events listed first, and it shows the battery life and signal strength of all connected sensors.

In testing, I set the app to notify me when my fridge door was left open for longer than six seconds. I did get an alert when this happened, but the alert said "Fridge door has been open longer than 1 minute." But when I checked with my kids and then tested it myself, the one-minute alert was sent after it had been open for six seconds. It may simply have a minimum open notification time of one minute. 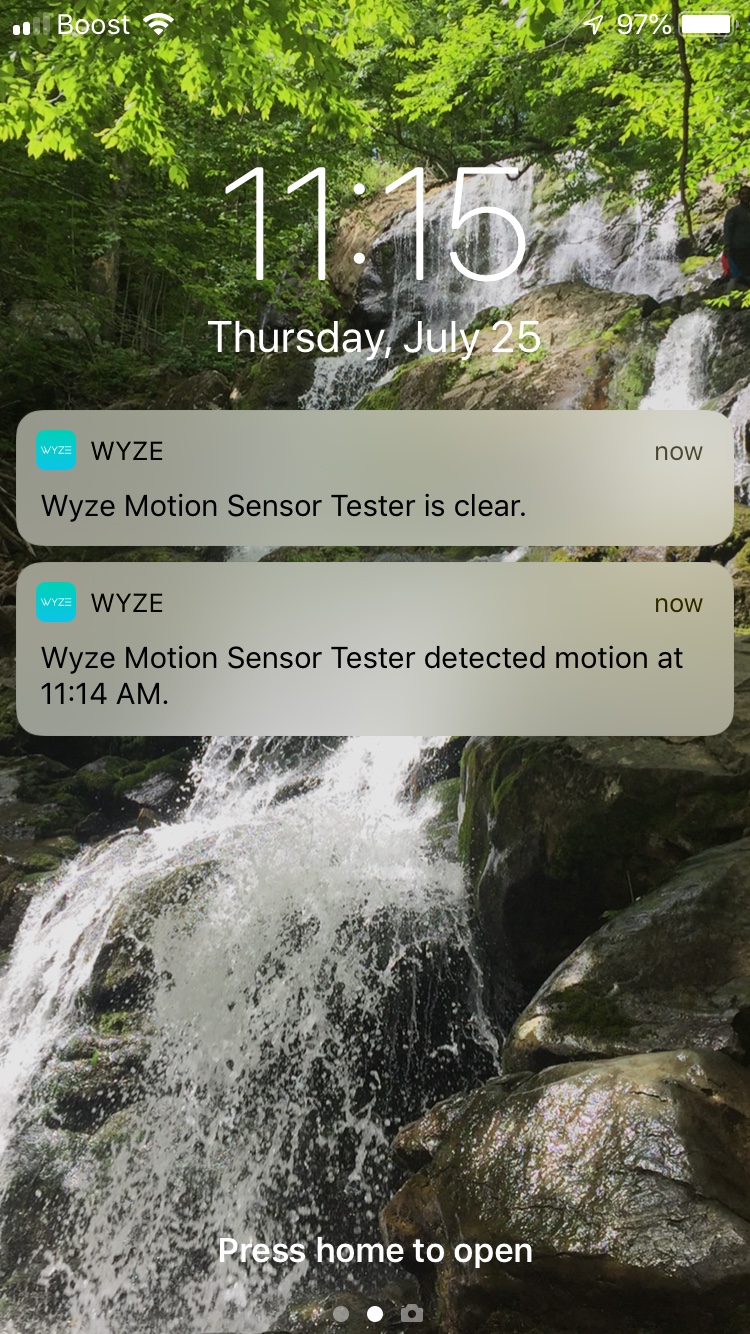 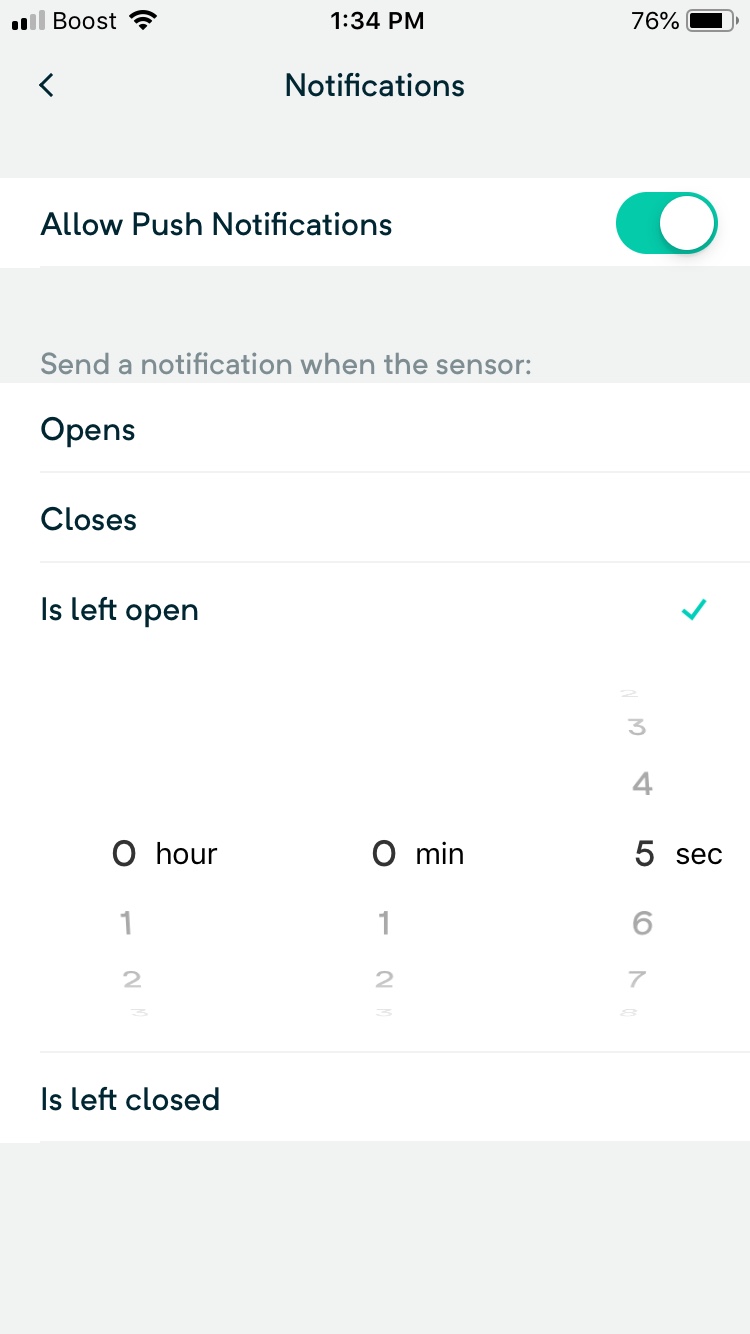 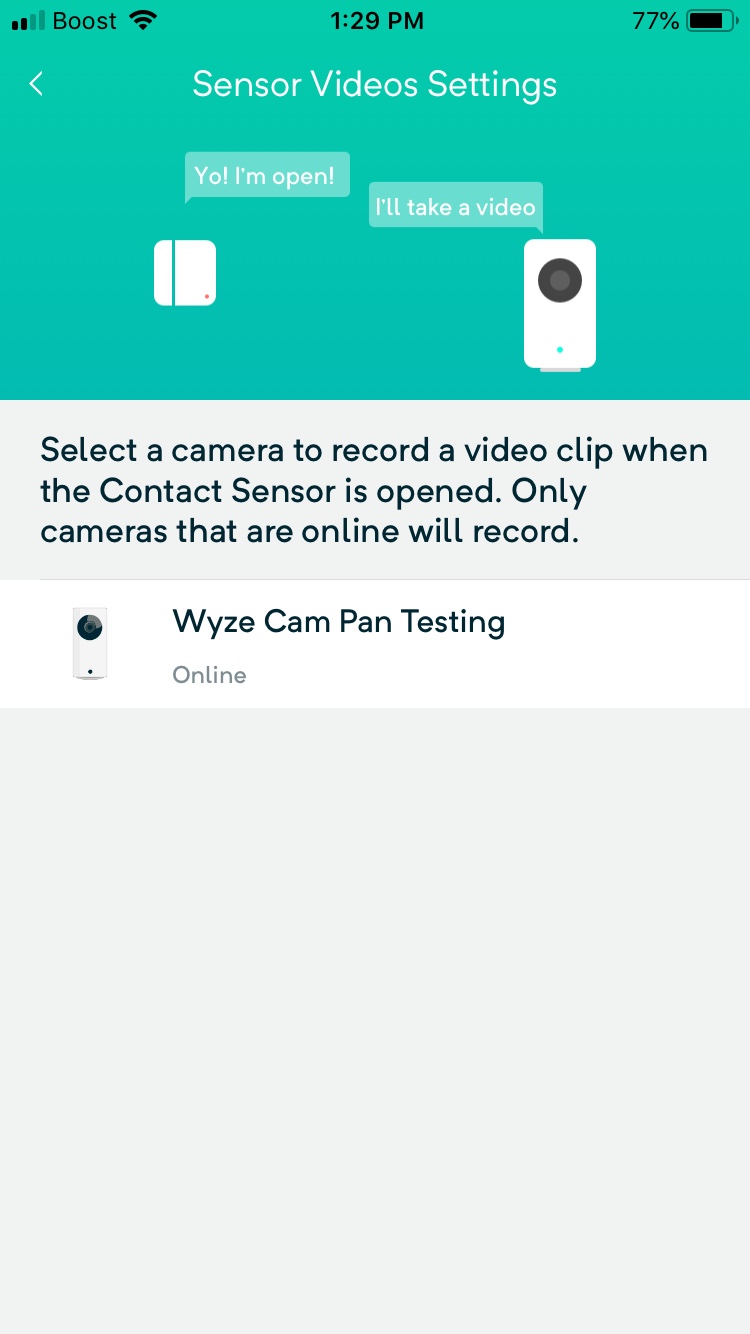 How Wyze Sense Stacks Up

Both SimpliSafe and SmartThings are DIY systems with sensors similar to Wyze, and both are standalone systems with options to dodge mandatory monthly fees. But unlike Wyze, SimpliSafe and SmartThings offer professional monitoring options and audible alarms. Still, neither comes close to Wyze in price, particularly considering Wyze's price includes a camera. But Wyze definitely falls short when it comes to smart home compatibility, especially compared to Samsung SmartThings.

In our opinion, yes. Wyze Cam captures live video with clear night vision, free 14-day rolling cloud storage, and time lapse videos. All for less than $40. You can also add up to a 32GB micro SD card for video storage. Check out our Wyze Cam review for more info.

Wyze doesn't yet offer devices for detecting smoke or carbon monoxide, but the Wyze Cam and Wyze Cam Pan have two-way audio with sound detection features to alert you with a push notification if the camera detects a smoke alarm in your home.

While it's true that the bridge does block part of the Wyze Cam's speaker, we didn't notice a change in the volume of the sound coming from the Wyze Cam with the bridge installed.

Yes, but you might need to replace the adhesive. Wyze recommends using a product like Command adhesive if you need to reattach sensors to a new surface.

Wyze Sense is an easy, inexpensive option for keeping tabs on what's happening in your home while you're away. It won't give you the full monitoring coverage or alarm capabilities of a true security system, but you'll know when doors open and close, and with the Wyze Cam you can watch the action as well. In short, it's discreet and easy to use, it functions well, and the price can't be beat.

How We Reviewed Wyze Sense

We tested the Wyze Sense Starter kit at home for a few days, connecting the sensors to a Wyze Cam Pan and downloading the Wyze app on an iPhone. We placed two of the sensors within 20 feet of the Wyze Cam and placed the third about 50 feet away in another room to check the range. We changed settings on the app to see how well each performed under different conditions. To find out more about how we test and review products, read our full methodology.

Written by
Kasey Tross
Kasey is a trained Community Emergency Response Team (CERT) member and a freelance writer with expertise in emergency preparedness and security. As the mother of four kids, including two teens, Kasey knows the safety concerns parents face as they raise tech-savvy kids in a connected world, and she loves to research the latest security options for her own family and for SafeWise readers.
Read More
No Comments