We dug into the 2001–2020 fatal and nonfatal data from the Centers for Disease Control and Prevention to understand the biggest threats to children's safety.1,2 We noticed some age-related shifts in the data as well as some trends that seem to affect everyone, so we organized our list of child safety tips by age group. Read our related guides for in-depth advice on each topic. 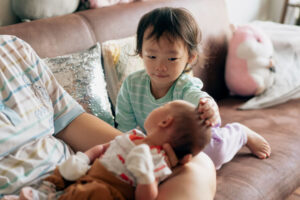 Don’t fall behind on the latest in kids safety!
Sign up for our weekly newsletter to get the latest family safety tips and product reviews on gadgets like kids smartwatches, phones, and car seats.

Sleep safety is one of the most significant concerns for children under 1 year of age. Improper use of a crib can lead to suffocation—the leading cause of unintentional injury deaths in this age group between 2001 and 2020.

Getting a safe crib is just the start. Be sure everyone who cares for your baby understands what “safe sleep” means: never falling asleep with an infant in your arms, and always laying them flat on their back on a firm surface.

Car crashes are the second-leading cause of unintentional injury deaths for this age group. Always use a rear-facing car seat with babies, and make sure it’s properly installed.

Drowning is another huge issue for babies, with 62% of infant drowning accidents between 2001 and 2020 occurring in the bathtub. Never leave a baby alone in the tub—not even for a minute. Take them with you if you need to grab something.

Choking is less common but is worth noting since it’s usually preventable. Around 5% of all suffocation deaths in this age group between 2001 and 2020 were attributed to choking. Most incidents involved non-food items.

House fires, extreme heat, and poisoning deaths were relatively rare for this age group in the last twenty or so years but still claimed more than 200 lives each.

Falling is the most common injury-related reason babies are brought to the emergency department. While falling is certainly a fact of life, do your best to prevent falls from any height:

Drowning is the number-one safety concern for toddlers. Whereas infants typically drown in a bathtub, most kids between the ages of 1 and 4 drown in swimming pools (47%) or “natural water” (14%). Children who complete formal swimming lessons are 88% less likely to drown, so sign your child up for classes as soon as possible.3

A smaller number of drowning deaths do occur in the bathtub, so continue to be vigilant about tub safety.

Car crashes are the second-leading cause of unintentional injury deaths among 1- to 4-year-old. There’s good news on this front: the number of toddlers killed in car crashes has steadily declined since 2001. Child pedestrian fatalities in particular have declined dramatically.

Children who are restrained properly face a 54% and 71% reduction in fatal injury.4  Continue to buckle up your toddler in a car seat that’s appropriate for their height and weight. A rear-facing car seat provides the best protection.5

House fires become a greater concern for this age group than for infants—but it’s unclear why. Make sure your little one knows what a fire alarm means and how to evacuate safely.

Choking and suffocation deaths in toddlers involve food more often than non-food objects. Cut food into small pieces, encourage your child to chew their food completely, and learn what to do if they’re choking.

Falling is the number-one unintentional injury-related reason toddlers are brought to the emergency department. This isn’t surprising since toddlers aren’t known for their grace and motor skills—but they’re 8 times more likely to fall and need emergency attention than infants. The only age group that gets hurt more often from falls is the 45+ crowd.

Continue to follow the same fall-prevention tips outlined above for infants. Start setting strict rules about being safe on the playground—no pushing and shoving on the slide, for example.

Here’s the good news: kids ages 5 to 9 represented the lowest number of deaths of all age groups between 2001 and 2020. They also wound up in the ER with injuries less often than toddlers.

Here’s what you still need to be vigilant about:

Car crashes were the leading cause of unintentional injury-related deaths in this age group and represented nearly 49% of all such deaths.

Continue to make sure your child is properly restrained in the car. They need to stay in a five-point harness car seat until they outgrow its height and weight recommendations. Next up is a booster seat with a back, and then a backless booster.

Drowning represents about 16% of unintentional injury-related deaths among 5- to 9-year-olds. Continue with swimming lessons and general water safety.

ATV accidents are relatively rare but claimed the lives of 475 5- to 9-year-olds between 2001 and 2020. Enroll your child in an ATV safety course.

Falling is the biggest reason kids in this age group visit the emergency room. Discourage risky behaviors such as jumping off swings, climbing trees, jumping on an unenclosed trampoline, and riding a bike without a helmet.

Car crashes are the leading cause of death among 10- to 14-year-olds—period. This is the first age group where an unintentional injury claims more lives than cancer.

Continue to set safe driving expectations, including proper seat belt use even when older siblings or friends’ parents are driving.  According to the NSC, 51% of kids ages 10 to 15 who died in motor vehicle crashes were unrestrained.

Suicide is a major concern among this age group, claiming more than 7,000 lives between 2001 and 2020. Suicides among kids aged 10 to 14 more than doubled in the last two decades.

You won’t cause someone to suddenly become suicidal by discussing the issue. Talk to your child often about how they’re feeling and what’s going on at school or with their friends. Be hyperaware of the effects of cyberbullying among today’s kids. Don’t hesitate to seek help from a clinician if your child is anxious or depressed.

The U.S. launched a new, easy-to-remember number for the suicide prevention hotline: 988. Make sure your child knows about this number, and don’t hesitate to dial it on their behalf.

Drowning decreases slightly for this age group versus 5- to 9-year-olds, but kids ages 10 to 14 are more likely to drown in “natural water” (nearly 46%) versus a pool (around 21%). Make sure they wear life jackets when boating, don’t dive into shallow water, and understand the effects of waves and riptides.

ATV-related deaths increase by nearly a third for this age group versus 5- to 9-year-olds.

This is also the first age group where overexertion—the third-leading cause of nonfatal emergency department visits for 10- to 14-year-olds—becomes a significant issue.

Be especially careful about sports safety with kids in this age group, since the top three injuries can all be caused by falling from a bike, skateboard, trampoline, or horse, being struck by any kind of sports ball, and getting overheated during practice.

But here’s the good news: the rate of injury among 10- to 14-year-olds has been declining steadily since 2012.

Many—if not most—first-time drivers fall into this age group. Make sure your teen understands the enormous responsibility of driving safely before they get their driver’s license.

Suicide claims the third-most lives in this age group. Firearms are used in most (nearly 45%) of those deaths. Continue to check in with your teen about emotions, bullying, and life in general.

And use a gun safe—suicide attempts involving guns are almost always fatal (85%). It’s true that a suicidal person may attempt another method if there’s no gun around—but it’s easier to revive someone from any other self-inflicted injury if they get immediate attention. That’s not true with gunshot wounds.6

It’s not a fun topic, but it’s critical to understand if you have guns in your home.

Poisoning represents a significant cause of unintentional injury-related deaths (nearly 14%) in this age group. Around 47% of such poisonings between 2001 and 2020 were accidental narcotic or hallucinogen overdoses.

Addiction experts say one of the most important things you can do as a parent is to have open, honest conversations about the consequences of drug use.7 Learn what drug use looks like and don’t hesitate to get help for your teen.

This is the only age group where falling isn’t the leading cause of nonfatal emergency department visits—it’s second to unintentional struck by/against injuries.

This category doesn’t include car accidents, machinery accidents, or assaults but does include getting hit by falling, swinging, flying, or rolling objects—which can happen at home, on the sports field, or at work.

Encourage your teen to learn and follow all safety protocols when they start their first job, play sports, or help out around the house.