Making your home a happy place for you and your kids has a lot to do with where you live. We analyzed hundreds of cities across America to find cities with the lowest crime rates impacting families.

And though no neighborhood is guaranteed absolute safe, some cities have four times lower rates of violent crime1, property crime2, and sex offenders3—which may lead to a safer, happier, and less stressful life for your family.

Did your hometown make it on our safest cities list?

For the purposes of this report, the terms “safest” and “dangerous” refer explicitly to rankings based on data sources listed in our methodology—no other characterization of any community is implied or intended

See the complete list of America’s 50 safest cities for families, and read our methodology to learn how we calculated our rankings.

Why focus on cities for family safety?

Keeping your family safe involves many factors, but you can look at crimes that impact family safety for guidance. Knowing your city's rates for violent crime, property crime, and sex offenders can help you make better decisions about how to secure your home and protect your family.

And if you’re not happy with where you live, this list gives you the best options for a safer haven for your family.

Depending on what you’re looking for in a city, we have a safest city guide for you:

Crime statistics can’t paint the whole picture. But you’ll get a better understanding of what crimes take place more in some cities than others.

Let’s take a look at the per-capita differences between the safest and most dangerous cities. When you compare these to national averages, you’ll see a dramatic difference in crime rates.

More populous cities typically have higher rates of crime across the board. That doesn’t mean your big-city life can’t be safe for your family, but the risks may be greater and occur more frequently. Knowing which types of crimes are more prominent in your area can help you understand where to focus your family’s safety efforts.

The most dangerous cities have double crime rates of the national average (per 1,000 people): 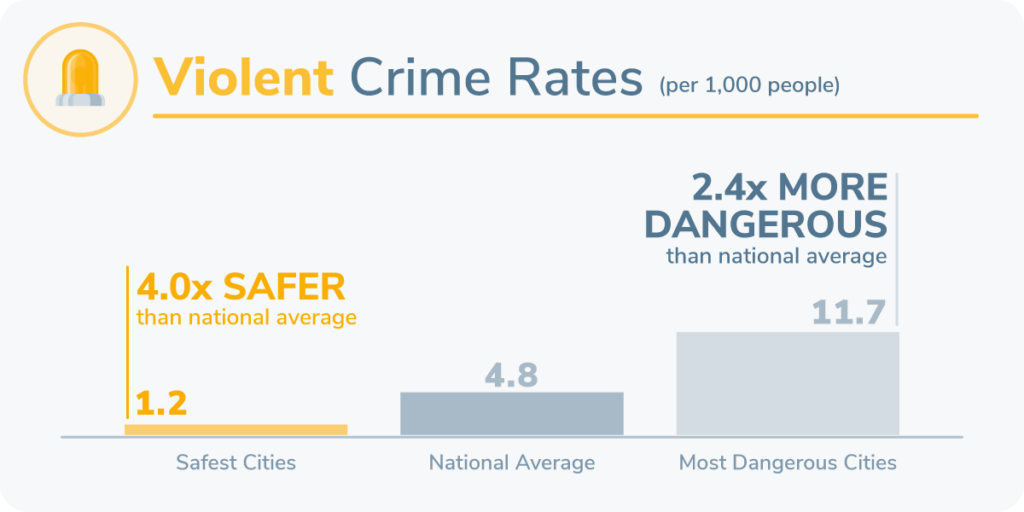 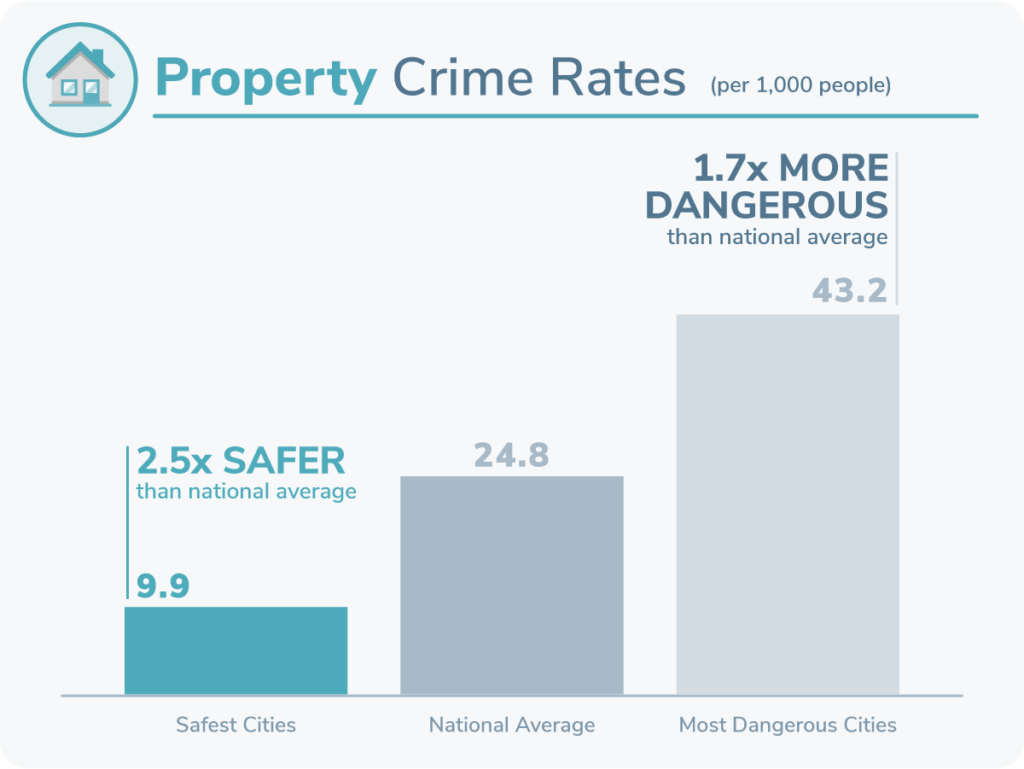 Property isn’t as valuable as human life, but it’s helpful to know if your city is more prone to crimes like burglary and car break-ins. And property crime is the most prevalent out of the crimes we analyzed.

While you can’t guarantee your kid's bike won’t get stolen if they leave it on the lawn, it’s less likely to happen in the safest cities for families.

It may not be fun to think about, but sex offenders are a reality for families to face, and knowing there are far fewer living nearby can be a relief. Fortunately, our analysis showed the number of registered sex offenders was the least prevalent crime per capita:

States, regions, and cities that stand out for family safety

Indiana, Texas, and California each had two cities in the top 10. They aren’t too far from urban centers either, so families can still drive to enjoy the benefits of downtown living.

The Wild West: Excluding California, western states like Washington, Utah, Oregon, Colorado, and New Mexico had no cities that broke into the top 50 safest cities.

Which states are the best for family safety?

California captured 11 slots in the safest cities for families list. A handful of other states had multiple cities with lower crime statistics than average: Texas (8), Michigan (5), Florida (5), and New Jersey (4).

New Jersey’s four cities were new to the list, along with two townships from Michigan (Shelby and Canton) and one city from Missouri (O'Fallon).

It’s worth noting these states also had their fair share of dangerous cities: California (3), Texas (4), Michigan (4), and Florida (2). So while you may be able to find a safe city in your dream state, it’s worth looking at which cities have the lowest crime rates.

The 50 safest cities to raise a family

These top cities have the lowest crime rates across the board, and most of these cities fall well below the national averages. If you’re looking for a safe place to call home, you have plenty of great options across the country.

America’s 10 most dangerous cities for families

In our analysis of over 430 cities, these 10 cities had the highest rates for violent crime, property crime, and sex offenders.

Cities that made the last top 50 cities for families list

As new data comes in, our list changes. We had 23 cities from our last report improve their ranking; 21 cities dropped in ranking. And 28 new cities made an appearance on the list.

Check out our last report in the PDF below!

The Safest Cities to Raise a Child

Methodology: How we picked the safest cities for families

We compiled the list of the safest and most dangerous cities to raise a child by analyzing the FBI’s 2020 violent and property crime report statistics (the most recent data available at the time of our analysis).

Cities were ranked according to the rate of reported violent crimes (including aggravated assault, murder, rape, and robbery) and property crimes (burglary, arson, larceny-theft, and motor vehicle theft). We calculated our final safety score by considering crime data alongside the number of currently registered (as of March 14) sex offenders per capita.

We weighted both violent crime and property crime at 30% of a city’s total score. Sex offenders per capita made up 40% of the score. Scores were then standardized to calculate our rankings for the safest cities to raise a child.

Cities were excluded from this list if they fell below the population threshold of 75,000 or didn’t submit a complete crime report to the FBI. Violent and property crime rates were calculated per 1,000 people in each city.

We only included cities with populations over 75,000 to help filter out smaller townships and municipalities. We removed any cities with incomplete data (12 in total). Our final report includes a total of 430 cities.

Each city was ranked based on the factors below:

Each measurement was normalized on a 0-1 scale, with 1 corresponding to the measurement that would most positively affect the final score. These adjusted measurements were then added together with the weights mentioned above to get a score of 100.

Wherever you live, we encourage everyone to be proactive about home security.

Learn more about your home security options—and find out which companies we recommend for every budget and lifestyle in our roundup of the Best Home Security Systems.