Bottom line: Vivint cameras are among the best

One of the biggest differentiators in a security system is its cameras. And Vivint shows a lot of competence with its three security cameras: the Vivint Indoor Camera, the Vivint Outdoor Camera Pro, and the Vivint Doorbell Camera Pro. These advanced cameras show Vivint's ability to innovate and keep it relevant in a dense home security marketplace.

Because Vivint designs and manufactures all of its equipment, it passes on research and development costs to customers. This makes Vivint equipment some of the most expensive you can buy for a security system, even before factoring in monthly monitoring fees.

Vivint is not for the faint of budget, but its security cameras demonstrate the value of investing in features that make customers happy. Check out the rest of our guide to learn about Vivint's cameras and what sets them apart—or holds them back—from the competition.

Vivint security cameras in this review 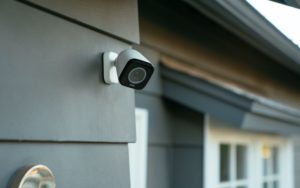 Info current as of 12/09/2020. Offers and availability may vary by location and are subject to change.

Before reviewing Vivint's security cameras, we scoured as much information on the subject as possible. While most of our conclusions come from comparing technical specifications and user reviews, we also considered what other online reviews said.

After collecting our data, we examined what each Vivint camera can do and put together a breakdown of its pros and cons. We then compared each camera's pricing and monitoring requirements to similar models in other major security systems. 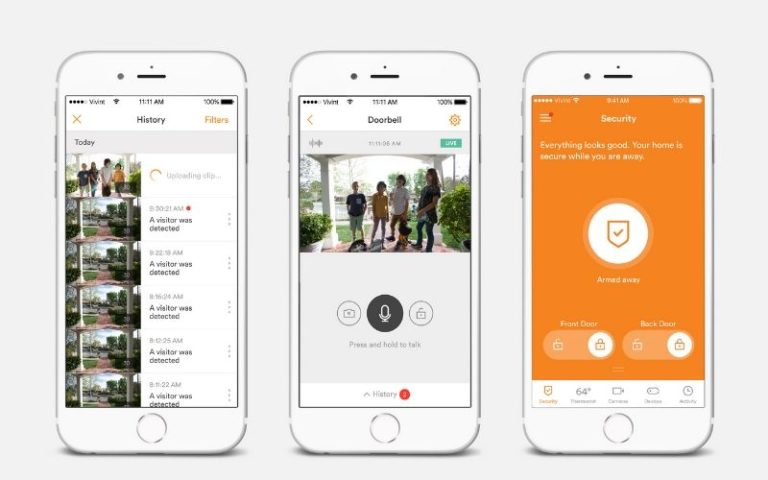 In general, there are more similarities between Vivint cameras than differences. Each camera has the same basic features because they all use the Vivint App. Here's a brief overview of the common benefits you can expect from Vivint security cameras:

Every Vivint camera streams and records 1080p HD video. This is the most common resolution among security camera manufacturers, making Vivint competitive with the likes of Ring and Alarm.com-based systems like Frontpoint.

Vivint offers 14 days of cloud storage for video clips as part of the monitoring plan. These video clips can be up to 90 seconds long, usually long enough to capture important events related to both guests and intruders.

You can get continuous Vivint Playback video recording for up to 30 days by purchasing the Vivint Smart Drive, which costs about $250. This 1TB hard drive is a local storage device that keeps your video recordings secure within your home. The Vivint Smart Drive's local storage is unique among security providers because most brands prefer to store security camera footage in the cloud.

Whether you use the cloud storage or Vivint Smart Drive, you can still access recordings anytime using your smartphone.

Each Vivint camera has two-way audio—so you can talk with people near the camera—using the Vivint Smart Home App. This feature is standard on most modern security cameras, so it's nice to know Vivint's keeping up with the latest trends.

After installation, the company states that you can move cameras without a technician if necessary. There's one big caveat to moving your cameras: the Vivint Outdoor Camera Pro and Vivint Doorbell Camera Pro use more complex wiring than the plug-and-play Vivint Indoor Camera. We recommend scheduling an appointment to move these cameras.

All of Vivint's security cameras require Vivint's most expensive monitoring plans, which start at $44.99 a month and increase by $5 a month for each additional camera. Vivint allows up to six cameras per account. So you might want to choose another system like Ring Alarm or Google Nest Secure* if you want tons more cameras, more affordable storage, and cheaper professional monitoring.

While Vivint alarm systems work with Amazon Alexa and Google Assistant, you can't use either platform to view video from the cameras. To Vivint's credit, you can see videos on the Smart Hub, Vivint's control panel, which comes with every Vivint security system. 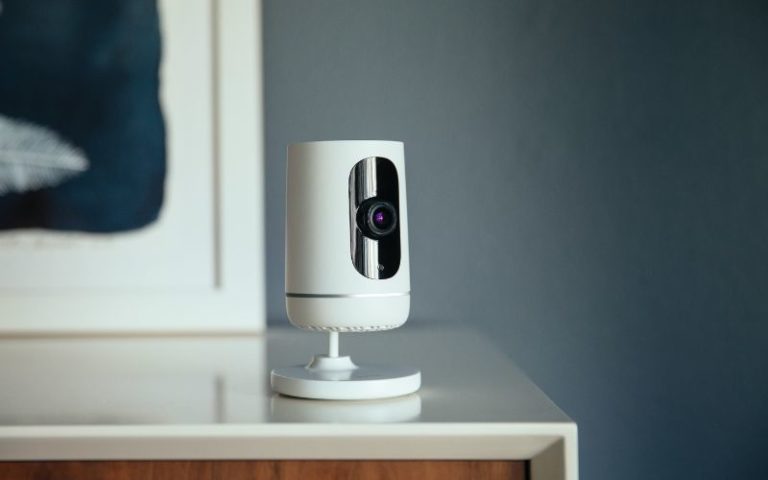 Vivint designs and manufactures its security cameras to work as part of a broader home security ecosystem. This means that there isn't a lot of overlap between the situations where each camera works:

While all of Vivint's cameras record video whenever there's motion, the Vivint Outdoor Camera Pro and Vivint Doorbell Camera Pro have additional programming to spot and deter threats:

The Vivint Indoor Camera is different from the company's other cameras because it puts a focus on two-way audio with one-touch calling. This means your family can push a button on the camera to call the Vivint mobile app. It's a lot like a high-tech intercom.

We realize the Vivint Doorbell Camera Pro has a press-to-talk button, but it's unrealistic to expect someone to leave the house whenever they want to have a private conversation.

Another feature we like is the Indoor's privacy mode, which allows you to disable the video streaming. This is helpful for times when video recording is unnecessary. You can also set up custom motion zones, so the camera doesn't send constant alerts as your cat moves in and out of its cat condo each day.

This camera costs around $200, which isn't too expensive compared to most cameras in security systems, but definitely on the more expensive end of the spectrum.

Overall, we think the Vivint Indoor Camera is a capable indoor camera due to its neat intercom feature and privacy mode. Together, these features make this one of the best indoor cameras among the top smart home security system manufacturers.

Outdoor cameras aren't always close to the action outside, so Vivint equipped the Vivint Outdoor Camera Pro with an enhanced still image feature that saves pictures in 4K quality. This supplements the 1080p video quality with more detailed images when video still frames aren't as good due to motion blur and other factors.

Vivint also gave the Outdoor Camera Pro a 3x optical HD zoom. Optical zooms are better than digital zooms because you're not blowing up existing pixels—you’re actually making the image larger on the camera sensor. But just in case the 3x zoom is not powerful enough, this camera also has a 10x digital zoom to give you more options.

This Vivint outdoor camera has better night vision range than the company's other models. It can illuminate objects up to 55 feet away using powerful infrared LEDs. This is excellent for watching over yards large and small. The camera also has the same powerful detection options as the Indoor Camera, but can also use Vivint's Smart Sentry AI to spot lurkers and other threats.

The Vivint Outdoor Camera Pro is Vivint's most expensive security camera—costing around $300—the Nest Cam IQ Outdoor is the only outdoor security camera that costs more. This is a steep price compared to the industry average of $180 for outdoor cameras.

We really like this outdoor camera's optical zoom and 4K image sensor, which gives it excellent video quality and still images.

The Vivint Doorbell Camera Pro comes with several notable features like package detection, a square aspect ratio, and a wide field of view. While package detection isn't unique to Vivint, we like that the camera also sounds a tone when someone approaches a package on your porch to warn them to leave. You also receive a notification on your smartphone at the same time and can trigger an alert with Vivint's monitoring services.

Another of the Vivint Doorbell Camera Pro's best features is the square aspect ratio on video clips. This is a big contrast to many doorbell cameras, which use a widescreen aspect ratio. While widescreen videos look great on smartphones, they don't capture as much detail above and below the doorbell, sometimes resulting in clipped images of visitors to your door.

The Vivint doorbell uses a 180º field of view on the horizontal and vertical planes to capture the best quality footage in this aspect ratio, something no other video doorbell does. Even other 180º doorbell cameras use a smaller vertical field of view under the assumption that it isn't necessary, but we like Vivint's willingness to buck this trend to test if a tall field of view makes a difference.

Despite its cost, the Vivint Doorbell Camera Pro is a great reason to choose Vivint and its smart-home-centric alarm system over other security companies.

Vivint was one of the first security companies to make and sell video doorbells, with its original model releasing in May 2015. The latest version of this product, the Vivint Doorbell Camera Pro, released in March 2020.

Even though you need to pay for Vivint's most expensive plans to get security cameras, it has the added benefit of including all of Vivint's other services like security sensors and smart home equipment.

Vivint boasts some of the most advanced cameras among security system companies. Each of these cameras stands apart from the competition with at least one unique feature:

This impressive equipment commands a high price, much more than most folks want to spend. But it firmly anchors Vivint as our top security system for the smart home. To learn more about Vivint cameras, check out our list of common questions below. Or you can read our full Vivint review to see why we chose it for our smart home pick.

Vivint doesn't advertise its legacy camera products online, so these might not be available. Our information on legacy products comes from Vivint's customer support portal. Still, you can ask a salesperson about these options when you buy a Vivint system.

No, we contacted Vivint about its video footage policies and received the following response:

"Vivint does not track data from customer’s video footage. Video footage is encrypted from the Vivint Smart Hub all the way to the cloud and back. Only customers can decide who is allowed to access their Vivint system, including their video feeds."

Officially, you must subscribe to a Vivint monitoring plan to use Vivint security products, including cameras. But there is anecdotal evidence on Reddit that systems work locally without the Vivint app or monitoring service, including video doorbells that still send video to the Vivint panel. This information is a couple of years old, so take it with a grain of salt.

Written by
John Carlsen
John is a technology journalist specializing in smart home devices, security cameras, and home security systems. He has over eight years of experience researching, testing, and reviewing the latest tech—he was the Smart Home Editor for Top Ten Reviews and wrote for ASecureLife before joining SafeWise as a Staff Writer in 2020. John holds a Bachelor's degree in Communications, Journalism emphasis from Utah Valley University. In his spare time, he enjoys hiking, photography, cooking, and starting countless DIY projects he has yet to complete.
Read More
No Comments