There are a number of innovative heart rate monitors available that can make small yet significant changes to your health. To help you care for your heart, we've done the research and compiled a list of the best heart monitors.
Best Overall 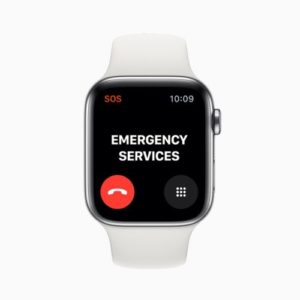 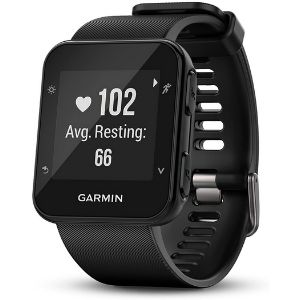 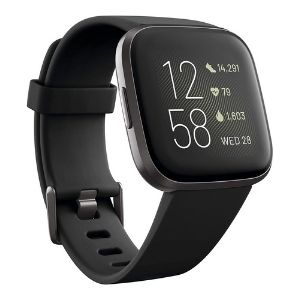 The Apple Watch 5 is a heart monitor, calorie and step counter, sleep tracker, time-teller, and loved-ones-caller—all in one wrist-sized device. If you can measure it, Apple Watch 5 can probably track it. And while the newest Apple Watch will take a bite out of your wallet, its features are pretty sweet.

This device is part smartwatch and part fitness tracker. If you want a simple way to track your health or help a loved one do the same, it’s a versatile and high-tech choice. 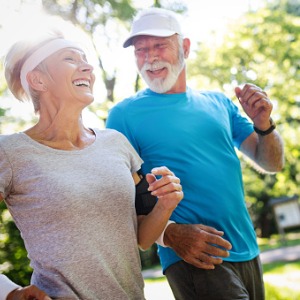 Info current as of 07/10/20. Offers and availability may vary by location and are subject to change.

Your heart rate is an indicator of your overall fitness and cardiovascular health. As we age, our chances of heart attack, stroke, coronary disease, and heart failure increase.1 So we picked fitness trackers and heart monitors with features that make tracking heart rate easy (and even fun) for seniors.

Qualities like large displays, messaging, comfortable or interchangeable bands, and expanded health-tracking capabilities were all at the top of our list.

We also browsed through consumer reviewers and expert opinions. Accurate readings, pricing, consumer interest, and smart tech capabilities were other qualities we put under the magnifying glass. To find out more about how we select our best picks, take a look at our methodology.

While these aren’t the only heart rate monitors we looked at, these are our favorites. We’ve also included additional monitors that didn’t make it into the ranking—take a peek to see if they meet your needs.

Whether you’re watching your heart rate for fitness or medical reasons, the Apple Watch 5 provides straightforward and accurate heart reporting. In addition to resting heart rate readings and sedentary alerts (reminders to move around), it can track sleep quality and dietary data.

Its large screen makes all this information easy to read. The display is also customizable, so you can make sure your screen layout works for you. To change the screen and make adjustments, just swipe on the watch face. There aren’t any buttons to fiddle with, making it easier to control for anyone with arthritis or stiff hands.

Our favorite senior-friendly feature is its automatic fall detection, a feature typically found in medical alert systems. We didn’t see this feature in any other fitness tracker or heart monitor we researched. If you fall at home or while out on a walk and can’t get up, the Apple Watch 5 will notice and call one of your emergency contacts. You can speak to the contact directly from the watch to get help.

Unfortunately, all these cool features don’t come cheap. The Apple Watch 5 is expensive (over $300). Compared to the other heart monitors on our list, it’s more expensive and runs out its battery in 18 hours. That said, it’s a pretty cool gadget with tons of health-focused apps and features.

Whatever your step goal, having a step counter can make your exercise much more fun. The Garmin Forerunner 35 is our pick for heart rate monitors that count steps. It shows your steps, heart rate, and time on a large, clear screen and has several different sport modes (looking at you, swimmers and cyclists).

But our favorite feature of the Forerunner is the incident detection and assistance failures feature that acts as a panic button. If you find yourself injured or in need of help, you can send your location to an emergency contact from your Garmin heart rate monitor.

While it’s not a replacement for a medical alert system, it’s a good choice if you’re wanting more activity-focused features.

You’ve probably heard about how 10,000 steps per day is the key to good health. But recent studies have shown that as few as 4,000 can be just as beneficial for older folks (women in particular).2

Fitbit Versa 2: Best for all ages

Best for all ages

For almost a decade, Fitbit has been the name in fitness trackers. It’s a great pick for people of any age and fitness level to monitor their vitals and activity levels.

While the company has several choices of devices, we picked the Fitbit Versa 2 because of its large screen and health monitoring. It tracks sleep, steps, calories burned, heart rate, and has a sedentary reminder to keep you moving.

The Fitbit Versa 2 doesn’t have an emergency call button or fall detection like our top two choices, but it’s still feature rich. Like the Apple Watch 5, you can connect it to your phone. So you can call your spouse with the grocery list while you’re out on a walk.

Its built-in Alexa assistant can also connect to your home devices, set timers, and walk you through workouts when you download activities and skills.

You can even connect Fitbit Pay to your debit card and pay for things by tapping the watch (and impress the grandkids at the same time).

The Fitbit Versa 2 has a six-day battery life, but we recommend charging it every couple of days to keep it going.

Among Fitbit’s heart monitors and activity trackers is the Fitbit Charge 4. If you’re interested in just tracking your heart rate and activity levels, it has similar features to the Versa 2. But it has a smaller screen and longer battery life (seven days versus six). You’ll still get access to the Fitbit app and tracking features but in a much simpler package. 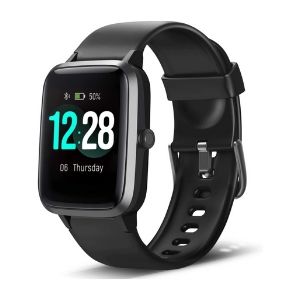 Let’s face it. A lot of these heart rate monitors and fitness trackers aren’t exactly cheap. That’s why we included the Letscom smartwatch. As one user said, she was looking for “champagne on a beer budget” and found it in the Letscom Smart Watch.

At under $50, it’s super affordable and a great starter device for anyone beginning a fitness routine or tracking their heart rate. (It’s never too late to get started, right?)

The Letscom Smart Watch has a large text screen with simple icons and controls, and not too many extras to get in the way of health tracking. Like the big brands, it tracks your heart rate, calories, and steps, and sleep patterns to give you a clear picture of your total state of health.

You can program different activity modes based on what kind of exercise you’re doing. Plus, it connects with Bluetooth headphones so you can play some tunes to get you moving.

As far as messaging goes, it’s more of a pager than anything. You’ll get alerts that you’ve received messages like texts to your phone, but you won’t be able to respond. If you can’t get to your phone, this may be an issue.

Other Heart Monitors to Consider

If you want a standalone heart monitor, you don’t need to wade through piles of activity and fitness trackers to find one. We chose a few of our favorite heart monitors designed with medical monitoring in mind. 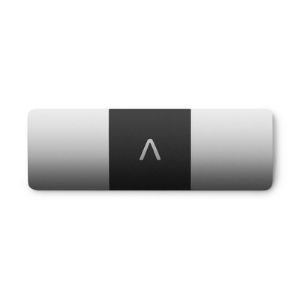 The AliveCor Kardia is a pint-sized EKG device that monitors your heart rate. To get your measurements, hold the device between your fingers and thumbs. You should get a reading within 30 seconds.

The device itself is screenless, so you’ll have to download the app to your mobile device. But from your phone, you’ll be able to see a personal six-lead EKG that will let you know how your heart’s doing. If you have an irregular heartbeat or heart issues, information like this can help inform your doctor about treatments to help you stay healthy.

If you want more accurate fitness-based heart rate readings, consider the Polar H10. This chest strap attaches directly to your chest (just under your heart) and uses electrical signals to read your heartbeat.

It connects to health and fitness apps like Fitbit and can provide you with in-depth data about your workouts or daily activity. The only issue is it may take awhile to get used to because of its placement, but you can expect accurate readings from this device. 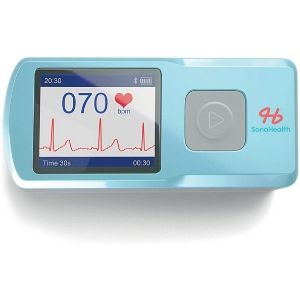 SonoHealth’s portable heart rate monitor takes EKG and ECG readings. It’s a pocket-sized device that you can press to your chest, legs, hands, or wrists to get measurements almost instantly.

You can sync it to your phone to keep a record of all these measurements to help with detecting arrhythmias and other heart issues. Much like the Kardia, these readings can help your doctor improve your treatments for heart health.

Heart health is crucial to living a long healthy life. Even if you’re over 65, it’s never too late to take the steps towards improving your heart. Heart monitors come with fitness trackers that count your steps along with your heartbeat or as medical-grade EKG or ECG monitors.

If you’re currently experiencing heart problems or have heart disease, consult your doctor before starting any new habits.

It all comes down to specialization. Both devices can measure your heartbeat, but fitness trackers measure other things like your step count, calories, and even sleep patterns. Heart monitors can be fitness trackers or medical devices with in-depth EKG or ECG readings.

Although wristband monitors are the most popular choice, chest straps offer more accurate continuous heart rate information. However, they tend to be expensive and less comfortable. We recommend a wristband heart monitor for aging adults since they’ll be more comfortable to wear all day.

*Amazon.com list price as of 07/10/2020 3:59 (MT). Product prices and availability are accurate as of the date/time indicated and are subject to change. Any price and availability information displayed on Amazon at the time of purchase will apply to the purchase of this product. Safewise.com utilizes paid Amazon links.

Written by
Katie McEntire
Katie McEntire has tested home security systems in her own apartment, installed GPS trackers in her own car, and watched her cat, Toki, nap all day through a live nanny cam feed. As an expert reviewer, she believes that firsthand experience is the best way to learn about new products (even if it requires being the guinea pig). She specializes in pet safety and DIY security and has contributed to publications like DigitalCare.org and TechGuySmartBuy.
Read More
1 Comment