Find out which metro areas reported the fewest crimes in our Safest Big Cities report. 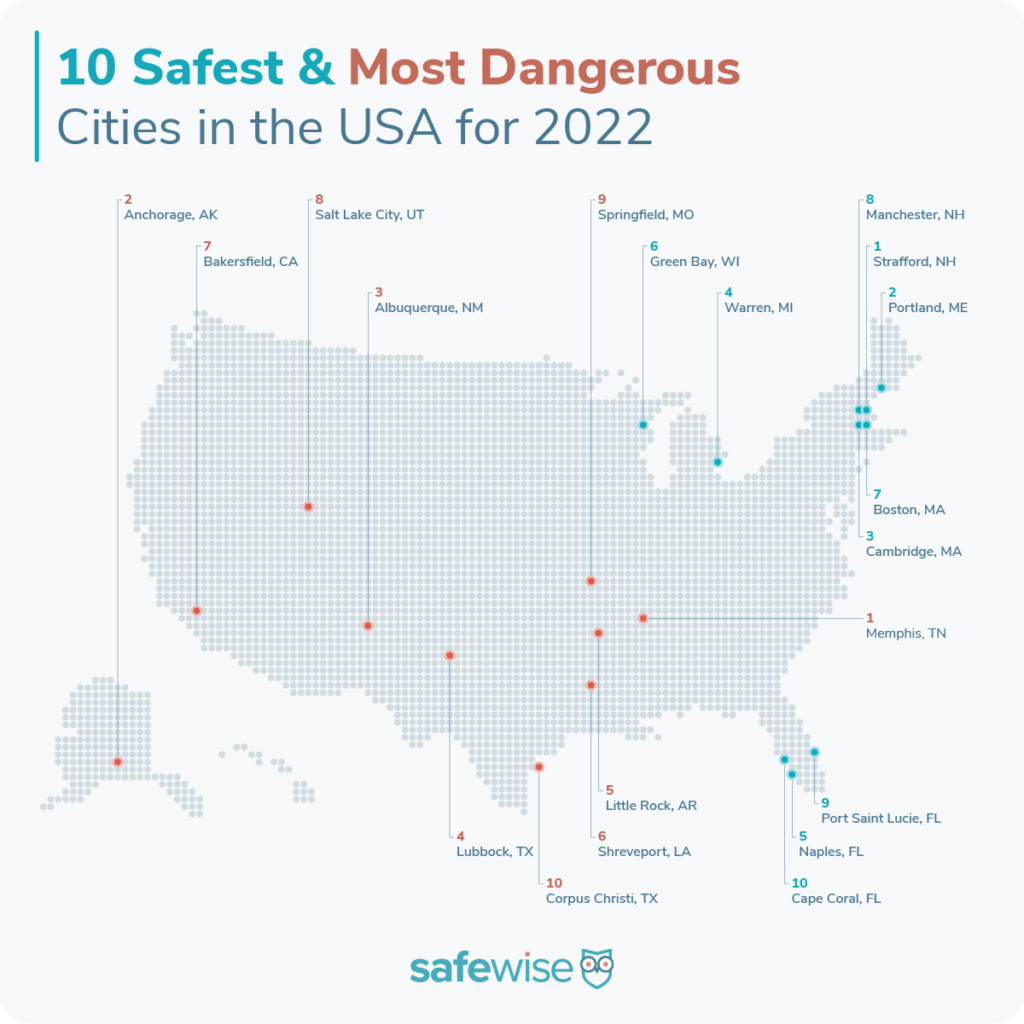 Violent crime continues to haunt the headlines and, unfortunately, it’s not just clickbait. For the first time since 2016, violent crime rose nationwide—and the country’s biggest cities can sometimes be a stark reflection of that trend.

Memphis, the city that tops our list, has seen a series of violent incidents including the abduction and murder of a kindergarten teacher and a shooting rampage across the city that left four dead and three wounded.

These tragic events weren’t part of our ranking calculation, but Memphis’s climb to the number one spot indicates a pattern of escalating crime in Elvis Presley’s hometown. The Bluff City crept from number three in 2020 to number two in last year’s report; it landed on top with the highest collective crime rates this year.

We used the most recent complete crime data from the FBI to identify which big US cities reported the most crimes.¹ Collectively, violent crime rose across the board year over year, but property crime in the metro areas we analyzed continued its downward trend, reflecting nationwide patterns.

The good news is that violent crime in the US has declined over 47% since peaking in 1991, according to FBI data. We’re hopeful the recent upward tick is more of a blip than a long-term trend.

If you live in a major metro area or plan to visit one, here's a deeper dive into the big cities with the highest rates of crime incidents—including demographic information and other community insights.

How worried are you about gun violence?

Learn more about gun violence across the US—and how much Americans worry about it—in our ongoing coverage of the facts and the fears surrounding this important topic.

Hunting for more information about crime and safety in your city or state?
We packed our other findings into a downloadable, in-depth State of Safety report for your state. Sign up to get the full report.

Learn more about every metro area that made our list

How these cities ranked most dangerous

When looking at crime rates and trends across the most populated areas of the US, we decided it made more sense to compare metropolitan statistical areas (MSAs) instead of standalone big cities.

MSAs include major "anchor cities" and outlying communities with high social and economic integration. So it paints a more accurate picture of both crime and the socioeconomic factors impacting the quality of life for residents.

Interestingly, we found that when you compare the crime rates of a big city proper with those of its MSA, the number of crimes per 1,000 people tends to go down.

We started with per capita crime rates for each MSA, based on FBI crime and population data. This data isn't perfect—it's self-reported by law enforcement agencies yearly—but it's the most comprehensive US crime data available.

We look at both property and violent crime—calculating the rate of each per 1,000 people. That's where the ranking comes from—if a metro area reports the lowest weighted and normalized violent and property crime rates per 1,000 residents, it lands at the top of the list. Those with higher crime rates fall to the bottom, with the lowest 10 making up the list of “most dangerous” big cities.

If a metro area didn't submit a complete report to the FBI or doesn't meet our population threshold of at least 300,000 people, we don't consider it for ranking.

We also explore median household income, employment, education, and annual budgets for more context about the "safest" and "most dangerous" metros. This contextual data doesn't factor into our scoring.

For the purposes of this report, the terms "safest" and "dangerous" refer explicitly to crime rates as calculated from FBI crime data—no other characterization of any community is implied or intended.

What about New York City?

The country’s biggest city is always conspicuously absent from our report, and inquiring minds want to know why. The reason is that NYC doesn’t participate in the FBI’s crime report collection. But we can give you some insight into crime in the Big Apple:3

Big-city life can be fast paced, exciting, and full of challenges. More people, more problems (am I right?). To give context outside of crime rates, we dug into socioeconomic and lifestyle factors among the most dangerous cities in the US—like poverty rate, high school graduation rate, and median household income.

Here’s how the most dangerous metros measure up in some key areas:

People in these metros worry more about violent crime and property crime.

These metros have smaller populations.

People in these metros are more likely to live below the poverty line.

Salaries in these metros are lower than the national average.

These metros spend more on public safety than the safest cities we ranked.

These metros have about the same number of high school graduates as the average American city.

Unemployment is higher in the most dangerous metros.

How has crime changed in the last year in the most dangerous metros?

In step with national trends, violent crime rates increased year over year in both the safest and most dangerous metro areas, while property crime rates dropped across the board.

America's violent crime rate increased for the first time since 2016—from 3.7 incidents per 1,000 people last year to 4.0—a 5% increase. Although the average violent crime rate among the most dangerous metros increased from 7.9 to 8.5—8% higher than the previous year—these cities still saw a smaller jump than the safest metros. Violent crime in the safest metros rose 18% year over year, from 1.7 incidents per 1,000 people to 2.0. 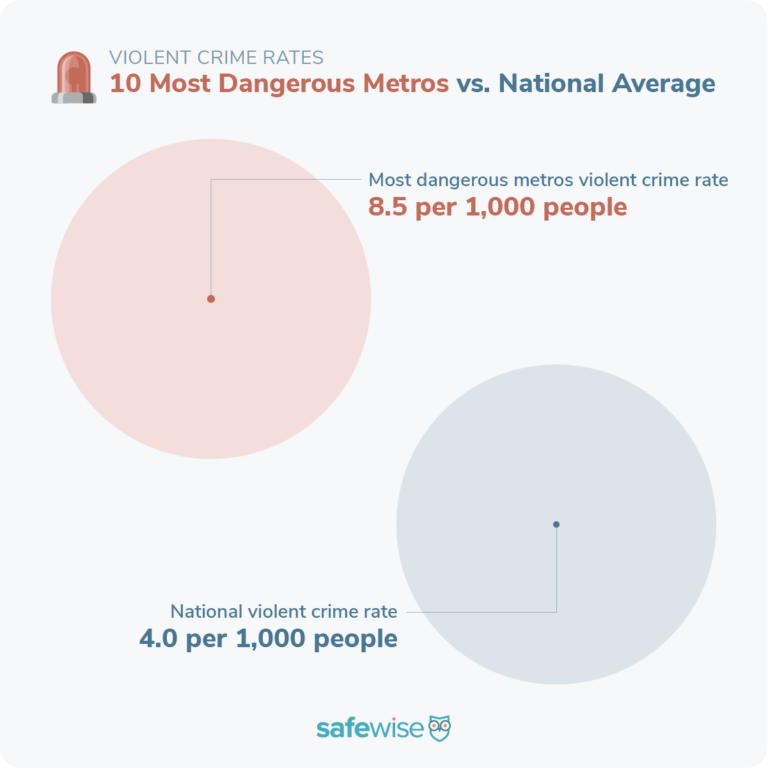 On the other side of the coin, property crime continued a sustained decline—dropping 69% since 1991. The national property crime rate dropped from 21.1 to 19.6 year over year—a 7% decrease. Among the most dangerous metros, property crime fell 4% collectively, from 35.5 incidents per 1,000 people to 34.2.  The drop in the average property crime rate among the safest metros went further—from 11.4 to just 9.9. That's a 13% decrease, nearly double the gain nationwide.

While an increase in violent crimes can bring new worries, the continued drop in property crimes in this year's report is worth celebrating. 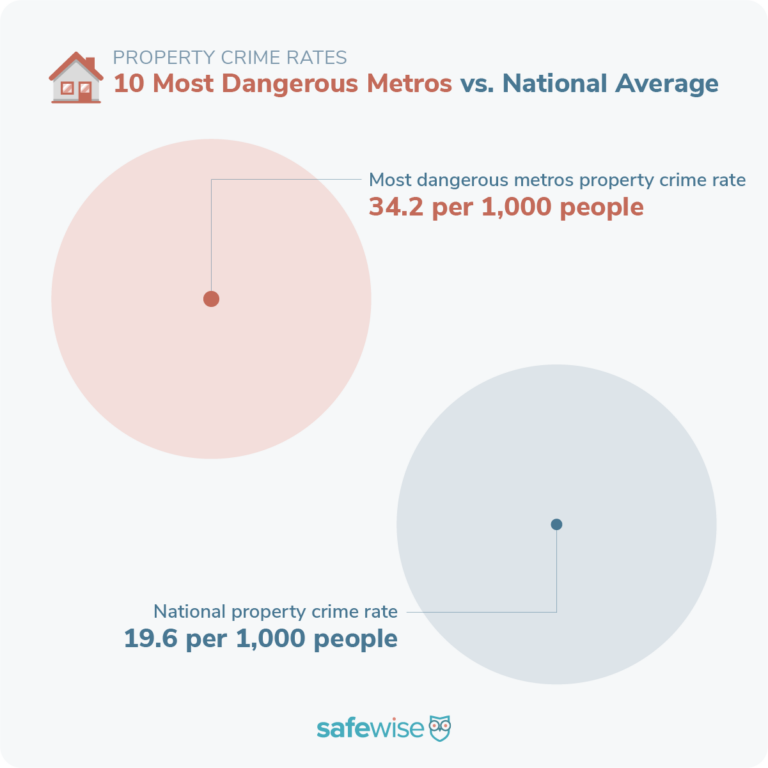 There’s no denying the alarm that comes with rising violent crime rates, and they shouldn’t be ignored or diminished. But it can be reassuring to put today’s violent crime patterns into a historical context.

Memphis unseated Anchorage, AK, which topped our list for the past two years. Here's why it ranks first:

When it comes to crime, size does matter

The two most populous cities reported the largest numbers of crimes.

State with the most dangerous metro areas: Texas

Everything’s bigger in Texas, including the number of major metros with higher crime rates. Last year, California claimed this dubious distinction with three cities landing in the top 10.

Crime rates in the most dangerous metro areas

Income and education in the most dangerous metros

City budget in the most dangerous metros

Whether your city made our list or not, we encourage everyone to be proactive about home security. One of the best ways to stop a burglary before it happens is to add a home security system.

We found the best home security options for nearly every budget, including self-monitored systems with no monthly fees and professionally monitored systems starting as low as $10 per month.

Find out which companies we recommend for every budget and lifestyle in our roundup of the Best Home Security Systems—and learn the basics with our guide on Everything You Need to Know About Home Security.

Find home security systems in the most dangerous cities:

Compare the best home security systems in the U.S.

Offers and availability may vary by location and are subject to change.
Read full ADT disclaimer.

Find the Safest Cities in each state

Click on the state image below to check out the safest cities for each state—and find out how people in your state feel about crime and safety in our State of Safety report.

Note: City budget data comes from the first city listed in the metro area—usually the most populated. We refer to these representative samples of a metro area as "anchor cities."