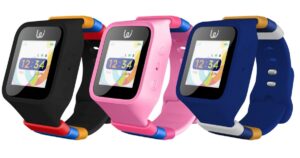 My youngest child just turned twenty-one years old, but I’ve moved into the role of Auntie Extraordinaire to youngsters ranging from age two to seventeen. This new position affords me the chance to spend a lot of one-on-one time with nieces and nephews—and pay back their parents for two decades of babysitting. And though kids are still kids, the world around them has changed significantly since my own children were little—especially when it comes to ensuring their safety.

Fortunately, along with increased concern about letting kids out of sight, there has also been an increase in wearable safety trackers designed to give kids more freedom and parents better peace of mind. I recently had the chance to take one such tool for a spin—the iGPS Wizard Watch Phone.

The iGPS Watch Phone is exactly what it sounds like—a watch that functions as a GPS locator and phone. This gadget was specifically designed with children in mind, and all the little ones I shared it with instantly fell in love. The watch links to a parent or guardian’s smartphone and automatically sends updates to let them know where their children have gone.

In addition to GPS location identification, the iGPS Watch Phone also features SOS calling, geo-fencing, and limited texting. You can purchase the watch for $109.95, and there is a one-time activation fee of $12.95. After that, service is $15.95 a month and does not require a contract.

Setup for the iGPS watch is pretty simple. It works with WeChat, a free app that is available for both Android and iOS devices. After downloading the app on the watch and your smartphone, you connect your phone to the watch and adjust settings to meet your needs.

The watch automatically sends an alert to your phone if your child removes it, and kids can also use the SOS button to send an alert that is followed by a call. In addition, you can change the alert settings to control how often you want GPS updates.

The Power Mode doesn’t send auto alerts and lets the battery last between three and six days. I recommend Normal Mode for regular use. It sends a GPS update every ten minutes and has a battery life of twelve to thirty-six hours. There is also a Real Time Mode that sends alerts every sixty seconds, but the battery lasts only six to twelve hours.

You can also customize the watch by setting up custom modes. For example, you could build a custom mode that puts the watch in Power during school, Real Time during recess, and Normal after school ends. You may also add up to eleven phone numbers, which are the only numbers that your child can call.

Even though the setup process is simple, it can take a little while to complete—communication between the app and watch seems to lag. I called iGPS customer service to help complete my setup and they were extremely helpful, friendly, and patient.

What I liked about the iGPS Wizard Watch phone

Overall, I really liked testing the iGPS Watch Phone. All the kids thoroughly enjoyed it, but the best part is that it worked well and lived up to its promise of providing reliable location and communication services between a guardian and child.

I was traveling and got the chance to test out the watch in Spokane, Kauai, and Salt Lake City. I found that the coverage is pretty impressive. Even on Kauai, where the airport doesn’t have Wi-Fi, I was able to get service at the resort and when I was near the coast. On the mainland, service was as good as on my smartphone and had few coverage problems.

As I mentioned, all the kids—from toddlers to teens—liked the watch and found it easy to use. Even the two-year-old figured it out with hardly any direction. There are only three buttons, which makes it easy for kids to operate. The watch is also pretty comfortable after a few wears and comes in pink or blue, which seems to appeal to most kids—although I had multiple requests for black from the older kids.

I found the GPS location service very accurate. It was easy to keep track of little ones at the resort and around the neighborhood, and I even had my boyfriend take it on a motorcycle ride. It sent me accurate alerts every sixty seconds and let me know when he left the perimeter I had set. In addition to showing me where he was on the map, the watch also provided an address, latitude, and longitude. It also replays the path of the person wearing the watch, so you can see where they’ve been. I wish I had an iGPS watch when my kids were teenagers.

The watch has a stealthy eavesdropping mode that allows you to call and listen to your child’s surroundings without alerting them or anyone else. I think the creators added this feature to help missing child cases, but it could also help you check in on kids at parties, during sporting events, or in situations where you want to make sure they’re okay and making good choices. My teen nephews used it to spy on each other and reported very satisfactory results.

What the iGPS watch could improve

While I enjoyed many features of the iGPS Watch Phone, there are a few things I think could use improvement.

My biggest complaint about the iGPS Watch Phone is the WeChat app. The watch uses eCare, which is housed in WeChat, but neither is very user-friendly. The app seems to have been made in China because much of the language in the app is in Chinese. And when I changed settings, the GPS sometimes thought I was in China for a few minutes. The English words have typos, and the functionality just doesn’t inspire confidence. I’ve heard there may be a new iGPS app soon, and I would love to see the watch work with a better-functioning app.

I love the geo-fencing feature, and so did the moms I showed it to, but setting up perimeters on the app is not easy. You have to draw the fences to set your perimeters, but it’s difficult to use, and I could only get it to make straight lines. This made it difficult to define precise borders in my neighborhood or at the resort. It would be better if you could set a radius instead of drawing the whole fence—if it does allow that, I couldn’t figure it out.

The company says that the watch has a texting feature, but that is a bit misleading. The watch is set up to let you send text commands to it, which let you ask for GPS info on demand. However, the watch doesn’t let you send messages to your child or allow them to respond to you.

Summary of our Wizard Watch review

Overall, I think the iGPS Wizard Watch Phone is a great device with a lot of potential. The current functionality provides what you need as a concerned parent or caregiver to keep track of your child and verify that they are safe. The design appeals to kids, the watch is easy for children to operate, and the device is less likely to get lost than a GPS locator that you put in a pocket or backpack.

I’m very interested to see what improvements are made with the new app, as that is my main complaint. Customer service was excellent, and the watch got the job done. The price is right, and I think the geo-fencing and eavesdropping features make this a valuable tool that can provide extra safety and security for kids from grade school to high school. Though learning and using the app requires some patience, I definitely recommend it to parents and other caregivers.

Check out the iGPS Wizard Watch.