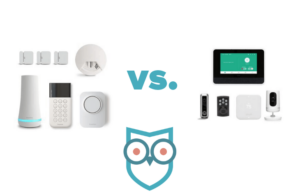 Vivint: Best for equipment and compatibility

Vivint is for people that want full-coverage security, from smoke detectors to garage door sensors. It’s also a smart pick for folks that want full home automation with a security system, thermostats, appliances, and lights controlled from the same place: the Vivint app.

As we mentioned before, in addition to Vivint’s impressive device lineup, it also offers financing options. Yes, going this route will put you in a dreaded contract that can run from around three years to a whopping five years. This is a helpful option if you’re in it for the long haul and don’t have the funds to pay up front.

While DIY installation is popular right now, some people just want professional installation. It saves time and that last thread of your patience if you hate setting up tech.

Okay, so Vivint is a bit on the expensive side. If you're on a budget it could be restrictive.

We also would like a DIY installation option. Why can’t all security system companies offer both DIY and professional options? Getting the system you want and the installation you want shouldn’t be an issue.

Read more in our Vivint review.

SimpliSafe is for people that like things, well, simple. It has a limited amount of devices, but that’s a good thing if you’re looking for basic home security at an affordable price. You also don’t need to worry about scheduling a time for a professional installation since it’s all DIY.

When it comes to smart home automation, there's not much you can do with SimpliSafe. You can pair SimpliSafe with Alexa and Google Home, but you can't use it in home automations alongside your smart lights and such.

Read more in our SimpliSafe review.

How Vivint vs. SimpSafe compare

Best for equipment and compatibility

At first glance, the differences are immediately apparent. The two systems look nothing alike. SimpliSafe’s equipment has almost a space-age feel, while Vivint looks like most other security devices.

Aesthetics may not mean much to you when it comes to security devices. We get it. You want to know how the security system will work for you. The biggest differences between these two systems come down to price, installation, device options, and money-back guarantees.

There’s a substantial difference between SimpliSafe and Vivint when it comes to price. SimpliSafe has cheaper monitoring plans and more affordable equipment, but Vivint’s value still wins out in the end.

SimpliSafe's monitoring fees start around $18, and Vivint’s start around $30. This is one of those cases where you get what you pay for. SimpliSafe’s $18 plan includes limited access to the SimpliSafe app: remote arming/disarming, some notifications, and the option to change system settings.

You have to boost up to the $28 plan if you want security camera recordings, extra notifications, an extended warranty, and smart home integration in the app. Even at the second tier, though, SimpliSafe is still a bit cheaper.

Their starter package prices are worlds apart. With SimpliSafe, you can snag a starter package for around $230, while Vivint charges around $600. Like with the monitoring plans, there’s more than meets the eye with these prices.

Vivint offers more equipment in its starter pack, and the equipment goes beyond the basic devices that just about every security system company offers. Instead of a keypad and base station, you’re instantly upgraded to a touchscreen. SimpliSafe doesn’t even offer touchscreens.

Plus, Vivint gives you a water sensor, which is helpful if your washer or dishwasher tends to overflow from time to time—getting alerted means quick cleanup and preventing expensive floor repairs.

Other than price, the most significant factor in SimpliSafe vs. Vivint is installation: SimpliSafe is DIY, and Vivint is professionally installed. Now, there are benefits to each type of installation, so it’s just a toss-up on what you’re looking for in this area.

SimpliSafe installs in less than an hour and takes no tools (unless you're installing the SimpliSafe doorbell). We found it easy to set up. But you may not have an hour, or maybe you just don’t want to fool with it. In that case, Vivint may be for you. 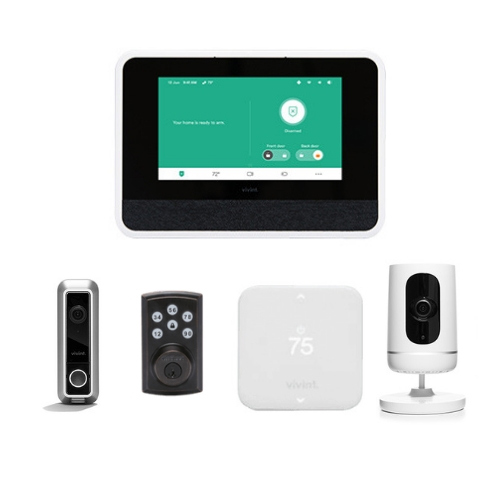 One of the things we love about Vivint's cameras is the SmartSentry feature, which lets trespassers know they've been spotted. It tells potential burglars that your home is protected and can help decrease package theft.

SimpliSafe's cameras get the job done for an affordable price, but don't expect any fancy extras. Vivint's in-house designers stay on the forefront of camera tech, but SimpliSafe didn't even have an outdoor camera until recently. We're glad they caught up, but Vivint's still way ahead in the camera race.

That said, SimpliSafe alarm systems do one-up Vivint by offering video alarm verification in the Interactive Monitoring Plan. This means professional monitors can access the camera's live feed for a short amount of time during an alarm event. Vivint doesn't offer this service.

No one likes to feel stuck with a decision, so we like that SimpliSafe gives you 60 days to change your mind from the day you order your equipment. Vivint only gives you three days after your installation.

Because SimpliSafe is a month-to-month, no-contract security system, you don't have to worry about cancellation fees. You can stop the pro-monitoring service and switch to self-monitoring at any time.

The only time you might be in hot water is if you financed your SimpliSafe equipment through Affirm—you still have to pay back that loan even if you cancel monthly services with SimpliSafe.

On the other hand, Vivint's cancellation penalties are steep. You don't get any wiggle room—Vivint expects you to pay 100% of your remaining balance if you cancel.

With Vivint, you deal with technicians and sales reps in-person, whereas SimpliSafe's customer service reps interact with you over the phone or online. If you have a strong preference for in-person assistance, Vivint's the way to go.

In fact, the hardwired, professionally-installed equipment makes it difficult to troubleshoot Vivint yourself. It's the opposite scenario when troubleshooting SimpliSafe—with no in-person techs available, you have to rely on your own gumption and clear instructions from service reps.

While we like SimpliSafe for its simplicity, Vivint wins this one. It just gives you more options overall. And it offers a large selection of security and smart devices to choose from.

Is SimpliSafe compatible with Vivint?

No, you can't mix and match Vivint and SimpliSafe equipment.

What are some other alternatives to Vivint and SimpliSafe?

I don't live in the US. Can I use Vivint or SimpliSafe?

If you need home security in Canada, you can use a Vivint security system but not SimpliSafe.

If you need home security in the UK, you can use SimpliSafe but not Vivint. Read our SimpliSafe UK review for accurate pricing and features.

Have more questions? Head on over to our Vivint FAQ and SimpliSafe FAQ pages for the full scoop.

How we decided: SimpliSafe vs. Vivint

We decided the winner of SimpliSafe vs. Vivint through hours of hands-on testing, decades of safety expertise, and hundreds of reviews by real customers. To learn more about how Safewise reviews products and services, take a look at our methodology page.