We tested ADT and SimpliSafe cameras, evaluated their apps, and researched their offerings.
No-contract pick

Because they’re so different, determining whether ADT or SimpliSafe is the best home security system depends on how much you want to spend and whether you want to DIY your installation and monitoring. Here’s the gist:

SimpliSafe is like paying cash for a small house. It's all yours, and you might not have much in the way of monthly fees, but it requires a little more work, it costs more up front, and if anything breaks, it's on you to fix it.

ADT is like signing a mortgage for a nice condo. You get high-end appliances, and you don't have to worry about maintenance, but you pay a hefty fee every month—and technically you don't own any of it.

SimpliSafe vs. ADT at a glance 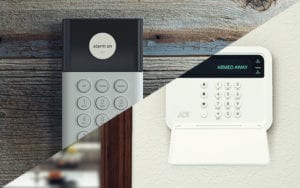 SimpliSafe is best for contract-free security

If you know that a three-year contract is just too big of a commitment for you—and you don't feel the need for fancy home automation features—then SimpliSafe is a solid choice for home security. Its equipment quality isn't as high as ADT's, but its monthly monitoring plans are a lot more flexible.

Plus, step-by-step instructions make it so easy to install (and uninstall) your system that you can pack it up and take it with you if you move. Finally, you don't have to worry about calling the company and setting up an appointment every time you want to buy SimpliSafe sensors or devices.

With SimpliSafe, you'll pay more for your equipment and install and maintain it yourself. But the monthly monitoring fees are half of what you'd pay with ADT, though SimpliSafe’s home automation choices are more limited.

ADT is best for professional installation and home automation

If you want reliable, reputable home security protection and the convenience of smart home gadgets—and you're not comfortable with figuring out the technology on your own—ADT is a good option.

While your monthly fees will be higher than what DIYers pay with SimpliSafe (and you'll be tied to a contract), you'll basically be paying someone else to worry about your system while you just enjoy its benefits. ADT is also great for larger homes, as its mesh network means that you can add unlimited security products and smart devices.

ADT leases its equipment and requires long-term contracts for a lower up-front cost, but it has higher monthly monitoring fees than SimpliSafe. Your ADT monitored system is professionally installed and maintained, and you have more home automation options.

How SimpliSafe and ADT compare

Info current as of post date. Offers and availability may vary by location and are subject to change.
ADT's starting price of $27.99 is for the Essential Plan landline package. If you want a cellular system from ADT, packages start at $44.99

Monitoring: Both SimpliSafe and ADT offer professional monitoring, and both monitoring companies have redundant monitoring centers so there’s never a problem getting help. (ADT has nine while SimpliSafe's monitoring service has six.)

SimpliSafe outsources to COPS Monitoring, while ADT monitoring is done in-house. Both systems have crash and smash protection and cellular backup.

Mobile app access: Both companies have smartphone apps that allow you to access your system remotely and receive text notifications and email alerts when door and window sensors get tripped or if there's an alarm event. But with ADT, you'll have to pay for a higher tier package to get access to the mobile app.

Shopping experience: The differences between SimpliSafe and ADT start with the shopping experience. With ADT, you'll be paired with a sales rep who will help you figure out what you need over the phone or arrange a home visit. You can get everything you need from SimpliSafe online—just click and buy. ADT has a professional installer help you determine what equipment you need to secure your home.

Contracts: ADT requires a lengthy three-year contract, while SimpliSafe is entirely contract-free. With ADT, you'll pay a minimum of $36.99 a month for professional monitoring for all three years you're in your contract.

Installation: ADT systems are professionally installed by a licensed technician authorized by a third-party provider, but you can install your SimpliSafe system yourself.

Connection type: SimpliSafe systems work off your home's Wi-Fi network, while ADT systems use a combination of Wi-Fi and Z-Wave technology. We found ADT's devices to be more reliable than SimpliSafe's, with more consistent connectivity. ADT’s video cameras also have a smoother feed and better night vision.

System maintenance: For a little extra each month, ADT will ensure that your devices continue to work flawlessly. This is a perk you don't get with a no-contract company like SimpliSafe.

Smart home integration: Both ADT’s and SimpliSafe’s wireless security systems work with Amazon Alexa voice commands. But ADT has expanded its smart home capabilities through its partnership with Google Nest* so you can also control your system through Google Assistant and have ADT technicians install Nest products alongside your security system.

Info current as of post date. Offers and availability may vary by location and are subject to change.
*Landline monitoring only. Some restrictions apply. See full disclaimer.

SimpliSafe's equipment packages start around $245 and go up to about $505. Because the company sells only its own products, its equipment offerings are pretty basic, with no home automation equipment like thermostats or smart bulbs. But every security device is simple enough for the average homeowner to install.

If you want professional monitoring, you can choose from one of two plans: the Standard plan at $17.99 a month or the Interactive plan at $27.99 a month.

The Interactive package includes mobile app access and alarm verification, which allows the COPS monitoring center to access your home security cameras in the event of an alarm to confirm that an emergency is taking place. You can cancel monitoring at any time or even choose to opt in only during months when you'll be out of town for long stretches.

With the Interactive plan, you also get a lifetime hardware warranty and a 10% discount on equipment purchases. (Yay for upgrades!)

Our preferred authorized ADT dealer, SafeStreets, charges $99 as its base installation fee, but an ADT home security insider told us that customers rarely pay that much. Don't be afraid to ask for discounts. The installation fee varies depending on the number and type of devices you have installed.

Because you're technically leasing the equipment—not purchasing it—you'll pay only the installation fee and one month of alarm monitoring up front. And since ADT monitors both homes and businesses, it has pretty much every home security device you might ever need and can fully cover any home, regardless of size.

As soon as your security system is activated, ADT will start monitoring it, and you'll be charged a base fee of $27.99 (or more) each month depending on additional services you choose.

Extras like app access, home automation, video recording, and a maintenance plan raise your monthly ADT fees. Just to give you an idea, a home automation plan including an Echo Dot, a video doorbell, and two smartbulbs costs $62.99 a month.

As we mentioned, SimpliSafe is contract-free. SimpliSafe also offers a 60-day money-back guarantee if you're not satisfied with your system, and they'll even pay for return shipping. Every SimpliSafe product comes with a three-year limited warranty.

ADT has a minimum contract length of 36 months, and it isn't easy to get out of. If you decide to cancel before your contract is up, you're required to pay 75% of your remaining monthly fees. (Restrictions apply.)

While ADT doesn't technically have a warranty, its Quality Service Plan (QSP) will cover any maintenance and costs just $5 more per month. ADT also offers a six-month money-back guarantee, but you'll get your money back only if ADT can't get your system operating properly.

Most of the stress points in ADT’s customer service have to do with long wait times on the company's 24/7 customer support line. The good news is that, from what we've seen in reviews, most customer complaints do eventually get resolved, even if it takes awhile.

One of ADT's biggest advantages over SimpliSafe is its smart home integration capabilities. ADT wireless security devices run on Z-Wave technology, so they can communicate with a whole host of other Z-Wave devices, like smart lightbulbs, thermostats, plugs, and more.

Plus, ADT's partnership with Google expands its offerings to Google Nest products.

You can use the ADT Pulse app to create scenes that allow your security system and smart devices to work together—like having your thermostat lower your home's temperature when your system is armed in "Away" mode to conserve energy in the wintertime.

SimpliSafe's home automation options are currently limited to voice control through Amazon Alexa and Google Assistant and integration with August smart door locks. Using the SimpliSafe web app, you can have your August smart lock automatically lock or unlock when you arm or disarm your SimpliSafe security system.

We've heard that SimpliSafe is working to improve its home automation features for added compatibility, but ADT's the clear winner here for now.

It's not often that we put the final verdict in our readers' hands, but with SimpliSafe vs. ADT, the decision mostly comes down to personal preference. But if you twist our arm, we'll say SimpliSafe is ultimately the better pick with satisfactory security at an affordable price—especially if you need to keep monthly payments low (and you want a little more freedom). If your lifestyle and budget allow for a pricier long-term commitment, then ADT's quality and device options are solid.

How we decided: ADT vs. SimpliSafe

I evaluated ADT as both a long-time customer and an objective security expert. I also tested SimpliSafe's cameras, used its app, and conducted thorough research on its security system offerings.

SimpliSafe's evaluation was based on my experience testing its cameras and using its app along with thorough research into its security system offerings. Every SafeWise review is different, but our full methodology explains more about our most common methods for rating and reviewing products.

Written by
Katie McEntire
As a renter, pet-owner, and woman living alone, Katie McEntire takes safety seriously. She’s tested devices like pet cameras, home security systems, and GPS trackers in her own home and devices in the name of safety. In addition to testing, writing, and reviewing for SafeWise, she also makes videos for the site’s YouTube channel. She’s been featured on publications like TechGuySmartBuy, Forbes, Healthy Moms, and Digital Care. Katie has a Bachelor’s degree in Technical Writing from Austin Peay State University in Clarksville, Tennessee. She’s held previous writing positions at Overstock.com and Top Ten Reviews.
Read More 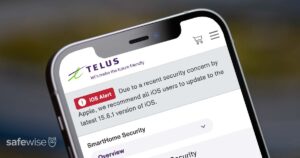 By
Rebecca Edwards
Best Identity Theft Protection in 2022
We researched the offerings of five leading identity theft protection services, tallying everything from antivirus...

By
Cathy Habas
8 Best Medical Alert Systems in 2022
See which medical alert system is the best to keep you and your loved one...