The Most (and Least) Pet-Friendly States in America

Do you live in a state that values your furry friend as much as you do? If you’re looking for a more compassionate place to call home for you and your pet, we’ve highlighted some of the most (and least) pet-friendly states to help.

How we ranked the pet-friendly states

When it comes to pet-friendly states, we wanted to point out places where you and your pet will find a strong community with proper measures to protect animals.

We ranked states on the following:

Note: We omitted Alaska and Hawaii because not all data points were available. See our animal ranking-factor or law overview sections for more information.

We looked for places with a lot of pet-friendly apartments and high pet populations. It’s one thing to live in a place that allows you to have a pet and another to find friends with pets.

And with more pet owners around, you’re more likely to come across parks, trails, or restaurants that allow dogs or other pets.

To make sure your pet (along with everyone else’s) is protected, we also considered laws that demonstrate compassion toward animals. Pet owners can feel a lot better knowing the rest of the community cares about animals.

We’ll also share some considerations that didn’t go into our weighing requirements but are still good things to know as a proud pet parent.

The 10 most pet-friendly states

Washington wins for being the most pet-friendly state, with over half of the apartment selection being pet-friendly (55%) as well as a high pet population of 63%.

The West Coast might be the best coast to raise a critter, since Washington, Oregon, and California all rank in the top 10. From sandy beaches to city streets to mountainous forests, you and your sidekick have plenty to explore.

But the Eastern side of the US has plenty of the most pet-friendly places, including Pennsylvania, Florida, Vermont, Indiana, Tennessee, and Maine. All of which have high pet populations along with laws in place to protect animals.

Are you a pet owner in one of the following states? It’s either time to move to a sweeter spot for your little buddy or advocate for the changes necessary to make every pet feel more at home.

The pet population of these states ranges from 47% (New Jersey) to 72% (Wyoming). However, the percentage of pet-friendly rentals is comparatively low, ranging from 6% (Connecticut and Wyoming) to 27% (Georgia). That means there are a lot of pets with potential for winding up in an animal shelter.

And all except Georgia lacked veterinary reporting laws. All except Connecticut lacked tether laws. We’re hoping these states can get more pet-friendly rentals and better laws for protecting pets.

Using the furry-friendly factors below, we normalized each measurement on a 0-1 scale, with 1 being positive (more pet-friendly rentals, higher pet populations, and stricter laws), and zero being negative. We added together these factors using different weights (percentages) to get a score of 100.

Up to a half-million (72%) of pets in the US are given to shelters because their renter parents cannot house them. Despite the “pet-friendly” label on 78% of rentals, many rentals usually include weight limits and breed restrictions that effectively reduce which apartments will accept your animals.9 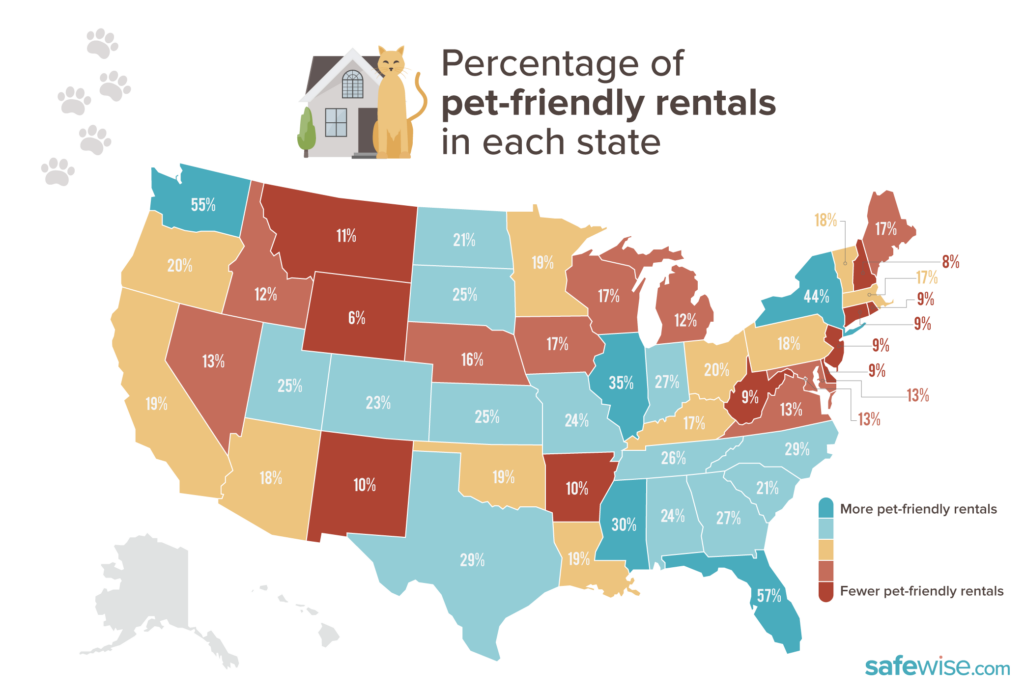 Florida's your best bet for a pet-friendly apartment, with 57% of apartments allowing animals of some variety, followed by Washington at 55%. If your state has a lower percentage of pet-friendly rentals, you can still find a place to live with your pet. But makes sure to factor in more time finding a spot and money for associated costs.

Roughly 38% of households own a dog, compared to 25% that own cats and almost 3% that own birds.10 With renters, that number goes down for each: according to Zillow, 31% of renters live with dogs, and 22% live with cats.11

Having a high pet population usually means your neighbors and local businesses are more welcoming, and likely to have more provisions available. (Who isn't grateful for spare doggy bags along a trail?). According to a recent APPA National Pet-Owners Survey, 67% of US households own a pet, which equates to 84.9 million homes.12

Car confinement is dangerous because of the heat and the lack of ventilation, food, and water. At least 31 states have laws that either prohibit leaving an animal confined in a vehicle under dangerous conditions or protect people who rescue distressed animals from vehicles.

If a pet comes into a vet's office with signs of abuse, does your state require the vet to do anything? Some states have laws that require veterinary professionals to report cruelty.

Other states consider it a professional responsibility, using disciplinary action or revocation of licenses for failure to report abuse.

The rest of the states have voluntary or permissive reporting, which allows a vet to break their client confidentiality to report abuse.

Your furry friends want to be free, so it's good to see that 22 states and the District of Columbia have laws on dog tethering/chaining.

While the laws themselves vary from state to state, the idea is that a person cannot tether a dog to a stationary object for unreasonably long periods, in harsh weather, or with cruel collars.

Animal cruelty by owners is a sad truth that we can't always prevent, but 29 states don't take those offenses lightly and impose “possession bans” that restrict future ownership or possession of animals by those convicted of animal cruelty.

Any equipment used in animal fighting can be considered illegal in half of all states and the US Virgin Islands.

Some equipment is more obvious like blades for attaching to roosters legs or breaking sticks for prying dogs' jaws open, but animal fighting training devices like hot walkers and treadmills may also fall under animal fighting paraphernalia laws.

Other considerations for a pet-friendly place

Aside from our ranking criteria, you may want to look at your current or future state's stances on other animal rights issues. If there's something you want to change about your state's laws, contact your local legislators to demand justice for our animal counterparts.

Every year in America, it’s estimated that 2.4 million puppy-mill-born puppies are sold. Meanwhile, 1.5 million dogs are euthanized in shelters each year because shelters are too full and there aren’t enough adoptive homes.13

The Humane Society publishes an annual list of notorious puppy mills called the “Horrible Hundred.” From 2018 through 2020, Missouri appeared on the list 75 times. In 2020, it was the only state in the double digits. Other states that had the most puppy mills appearing on the list from 2018 to 2020 include Ohio, Iowa and Pennsylvania.14

However, despite their reputation, these four states are among those with stricter regulations when it comes to puppy mills. 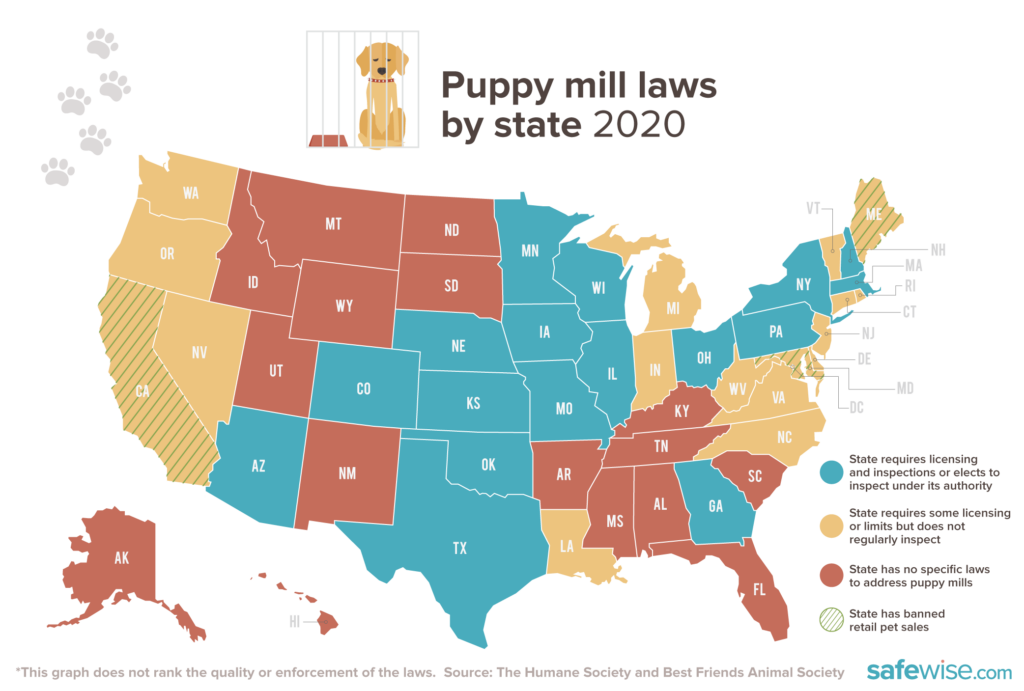 Supporting your local no-kill shelter is a great way you can help the pet population as a whole. No-kill animal shelters ensure that they save at least 90% of the animals coming in, and in 2019, Delaware became the first official “no-kill state.” 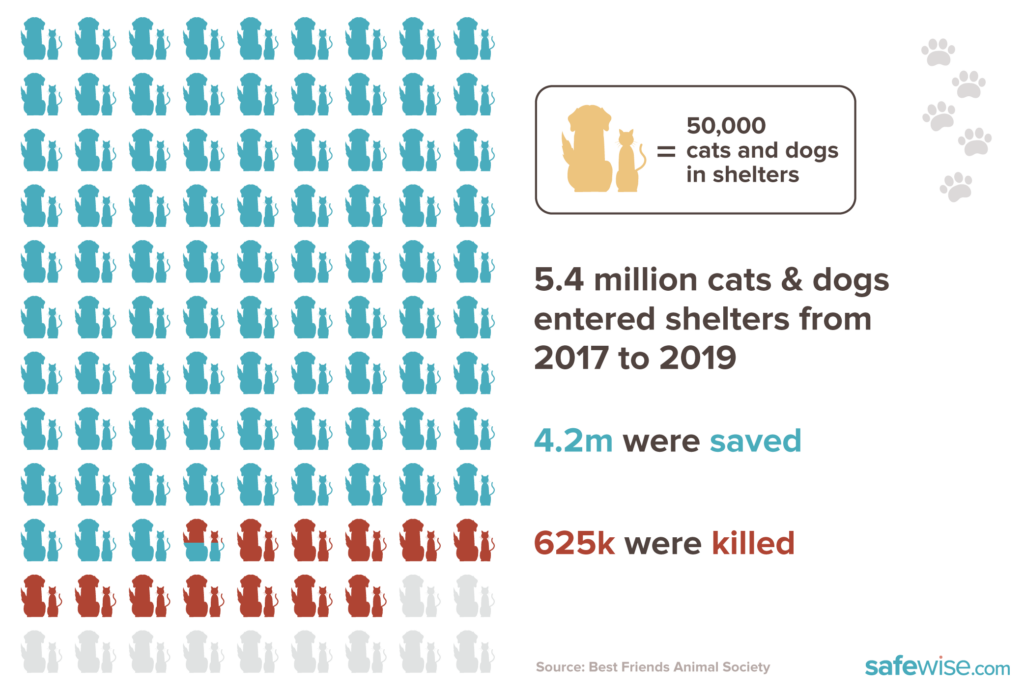 Although it's tempting to get a puppy from a breeder, adopting a pet means saving a life. In estimations from the Best Friends Animal Society, 4.2 million pets were saved, while 625,000 were killed.15

How has COVID-19 impacted animal adoption?

In some cities, adoptions have increased by as much as 90%.16 Between stay-at-home orders and social distancing, many folks rescued a new roommate or spent more time with their pets, leading positive results for adoption.

How else can I keep my pet safe?

While having plenty of pet friends, places to live, and protections are all great, being a pet parent entails a lot of responsibility. We've compiled a list of resources to help you keep you and your pet safe:

Complete rankings: the most pet-friendly states