The Safest and Most Dangerous Roads on New Year’s 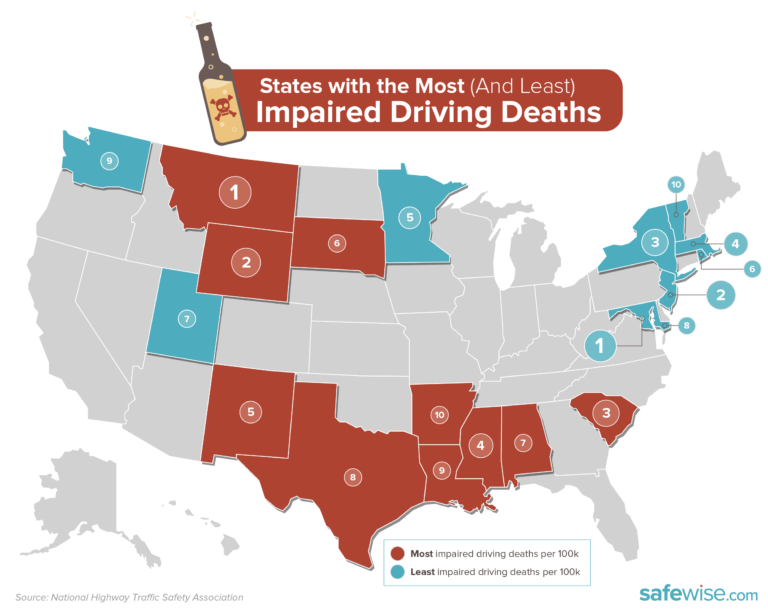 Next to Mardi Gras, people consume the most drinks on average during the New Year’s holiday, with an average of 43.5% of the population binge drinking.1

SafeWise wants to help you ring in the New Year with class and grace, so we’re helping you get home safe. We’re giving away $10 Lyft vouchers to the first 100 people who register for our Safe Rides Home campaign.

Even if you don’t qualify for our voucher, you can still save yourself the $6,500 or more you’d spend on a DUI by instead hailing a ride from companies like Lyft, taking public transport, or asking a friend to be the designated driver.2

Our Safe Rides Home campaign promotes alternative forms of transportation, which on nights like New Year’s Eve are more than necessary for anyone having a drink or two. It’s smarter to avoid driving drunk than risk the consequences.

Between Christmas and New Year’s in 2018, there were 285 drunk-driving-related fatalities. And a total of 10,511 people were killed in drunk driving crashes, which accounts for a third of deaths on roads every year.3 These deaths are 100% preventable.

States with most drunk driving deaths

Based on fatal crashes where the Blood Alcohol Concentration (BAC) level was .08+.

Based on fatal crashes where the Blood Alcohol Concentration (BAC) level was .08+.

Drunk driving in the most dangerous states

Since we last reported on the most dangerous states for impaired driving, a lot’s changed. We’ll catch you up on some of the more notable differences from the 2017 to 2018 data.

On the right track

The following states also saw notable improvements from 2017 to 2018:

But the biggest increase in dangerous driving came from New Hampshire, which increased in danger by 25 rankings. New Hampshire went from being one of the safest states for driving to worse than average.

What else did we learn?

If you’re in an at-risk state, make sure to sign up for our Safe Rides Home initiative.

Get a safe ride home on New Year's Eve

Let’s start off the New Year rolling in style. Whether you’re driving around for the holidays or your daily commute, we can all make an effort to be safer.

Our Safe Rides Home campaign promotes alternative forms of transportation for impaired individuals, so help us spread the word. And see if you qualify for one of our $10 Lyft vouchers too.

We sourced data from the National Highway Traffic Safety Association to determine which states had the most impaired driving deaths. We counted all crashes in 2018 (the most recent data) involving drivers with a BAC level of .08 or above. We then compared these with the state’s population in 2018 to find how many deaths per 100,000 residents there were.