But with growing public concern and government scrutiny aimed at big tech companies, do we trust tech to take care of us and our kids?

Our recent survey shows that Americans feel more in control of their privacy and data but have growing fears of hackers, spying, and monitoring. And we’re worrying less about criminals and more about businesses. As our technology use increases, we remain conflicted about what that means for our safety. 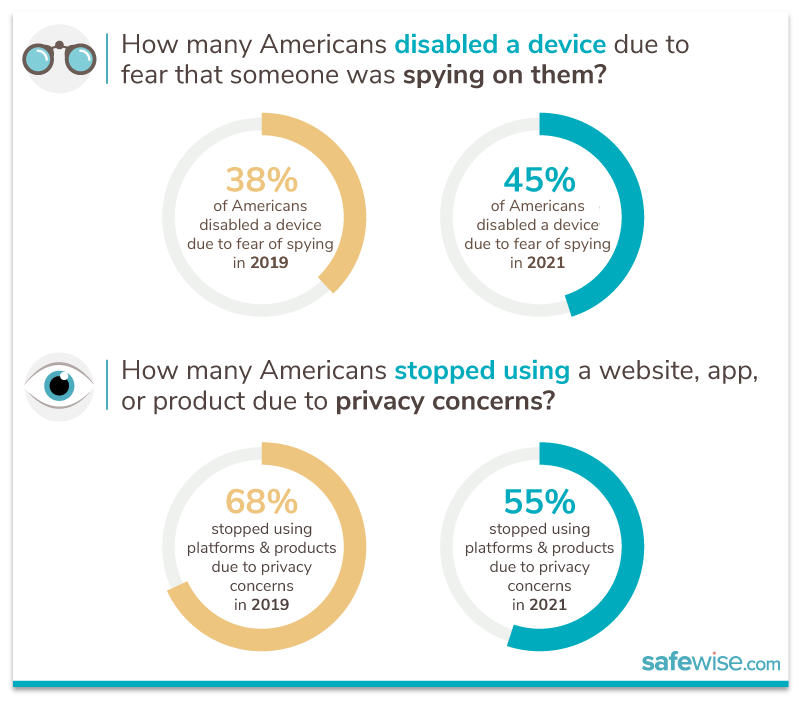 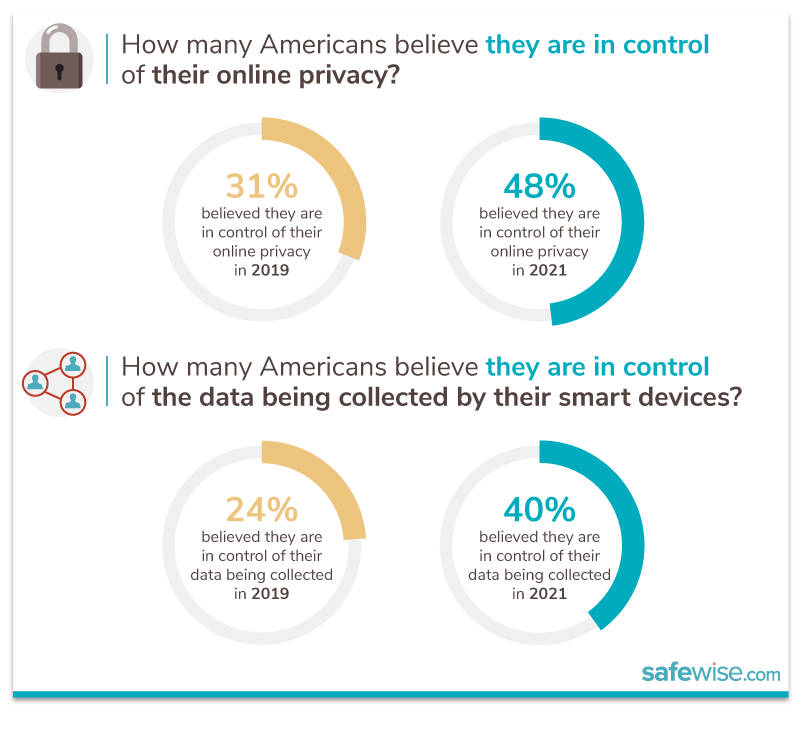 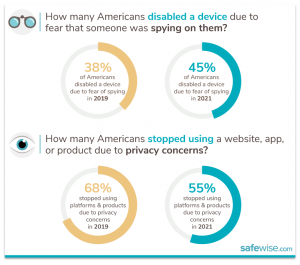 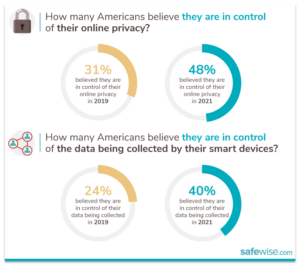 While stuck at home, most Americans increased their home tech spending in 2020. However, the fear of being hacked also increased in the past year by 40%.

Despite their fears, as many as 60% of survey respondents said they purchased a smart home tech device in the past year; 65% said they use a smart home device daily.

Have we become too reliant on or trusting in tech? Two in five Americans would trust a smart hub assistant to entertain and monitor their kids in their absence. The trust in smart hub assistants nearly doubled since our last tech survey in 2019.

Alexa and other smart hub assistants may have earned our trust on a basic level, but we can’t recommend leaving your child alone with tech in the event of emergencies. Still, if your kids are responsible and old enough to be left alone, relying on a tech backup can alleviate some fears while you’re away. We recommend talking with kids about tech and internet safety.

It makes sense that we see more people trusting tools they use daily. But, considering our dependence on them, does that also mean we should hold skeptical standards for the businesses that sell them?

Most Americans show concern over being monitored

In 2021, most Americans are concerned with criminals watching them online and through smart devices. Since 2019, the fears from monitoring by criminals and the government have decreased, but concern for monitoring by businesses increased.

Although the concern for criminal activity has decreased in the past year, crime remains high. The most recent figures from The Internet Crime Complaint Center (IC3) report more than $3.5 billion in cybercrime losses and an average of 1,300 victims every day.1 And the biggest data breaches steal billions or hundreds of millions of data points about individuals and businesses.2

Over 61% of Americans are also concerned with being monitored by businesses and the government. (Taking precautions of its own, the government plans on spending nearly $19 billion in cybersecurity in 2021.3)

Businesses use our data in various ways, from improvements to their products and services to outside marketing. Understanding how that data flows gets complicated pretty quickly, which is partly why Big Tech’s power faces scrutiny.

Attitudes on monitoring vary, but according to Pew Research, only 40% of Americans think it’s acceptable for the government to monitor ordinary US citizens.4 However, almost 85% of our survey respondents would want police to check their devices if they experienced a crime.

Data tracking, surveillance, and monitoring can be helpful for a variety of reasons, but Americans generally want ownership over their data and privacy.

As folks become more aware of the need for cybersecurity, we saw an over-16% increase in folks who believe they are in control of their online privacy.

Are data-tracking algorithms that good, or is Alexa listening to your every word? Over 52% of Americans believe that smart devices are listening and recording conversations at all times.

If we don’t trust tech, will we continue to use it? In 2021, we saw a 7% increase in respondents who have disabled devices for fear that someone was watching or listening to them.

Torn between privacy and safety concerns and the convenience and reliance on tech, Americans remain divided in their opinions on tech’s trustworthiness.

Whether we recognize it or not, much of our online activity is accessible to others, including criminals, businesses, and the government. Data tracking and monitoring is a complicated subject with blurred lines, but you can be proactive about protecting yourself and your loved ones online.

Here are some of our online safety tips:

In 2021, we surveyed 600 Americans nationwide to see how much they trust the technology they use regularly in their homes. We also had them pinpoint where their privacy and security concerns lie. We compared these results to a previous proprietary survey (conducted in March 2019) to gauge the increase or decrease of tech-related concerns.