Home | Safety News | Which States Are Most Worried by the Pandemic?

Which States Are Most Worried by the Pandemic?

By Trevor Wheelwright
Researcher & Writer
Share Article
SafeWise is an independent review site. We may earn money when you click links on our site. Learn more.

Does thinking about the pandemic make you anxious? Depending on where you live, people may be more or less concerned about COVID-19 on a daily basis. But does our worry help us?

Using data from our State of Safety survey conducted in September 2020, we break down the concern for the pandemic by state. We then compare that “worry rank” to the CDC’s number of COVID-19 cases, deaths, and vaccines per 100,000 people in each state (as of February 2021).

How concerned about the pandemic is your state? And how does that level of worry relate to  COVID numbers? You can spot your state on the map below, or jump down to the full data set. 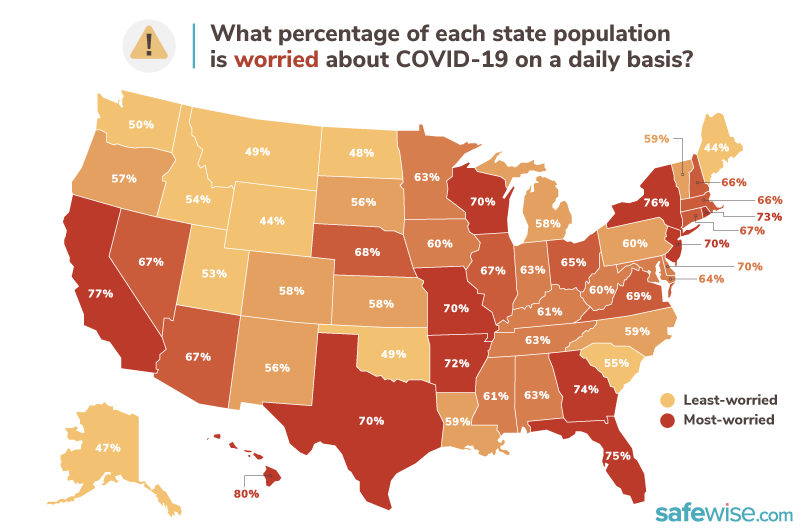 According to our survey results, only 62% of the country worries about the pandemic daily. However, some places are far more worried than others.

States most concerned by the pandemic

States least concerned by the pandemic

But how does each state’s concern compare to rates for cases, deaths, and vaccines?

COVID-19 stats at a glance

See the full tables below for more information.

The amount of worry each state had in September doesn’t necessarily correlate with the rate of cases they had in February. The top 10 states for high case rates ranged in concern from 48% of the population to 73% worry.

Worrying might cause more people to take more precautions, but according to the death rates, it had little effect on each state’s numbers. And some states that worried less also saw lower death rates.

More than other data points, low death rates correlate with low concern. States like Alaska have  low death rates despite being one of the least-worried states. Maine, Oregon, Utah, and Washington all had lower amounts of worry accompanied by lower death rates.

As an exception, Hawaii was the most-concerned with the pandemic, but had the lowest death rate. (So did their concern lead to fewer deaths? We’ve seen that Hawaii shows more concern for crime-related issues than any other state.) Virginia was the twelfth-most worried and also had a low death rate.

Did states with more concern get more vaccines per capita?

More vaccines per capita went to the states with the least amount of worry, which seems counterintuitive. We would expect the vaccine response to match a higher level of concern, but this was not the case.

Alaska had the most vaccines but the lowest levels of worry. New Mexico, South Dakota, North Dakota, Wyoming, and Oklahoma all had lower amounts of concern but higher numbers of vaccines per capita. (Is it possible that these states had confidence in the arrival of vaccines?)

Meanwhile, states with more worry (except for Hawaii) did not receive higher numbers of vaccines per capita.

Texas received the least vaccines per capita but was the eighth-most worried about the pandemic. Other states with a higher level of worry also received fewer vaccines, like Georgia, Arkansas, and Missouri.

Some states with lower amounts of worry also received fewer vaccines, like Kansas and South Carolina.

COVID-19 worry and statistics by state

To find your state’s level of worry and COVID-19 numbers, see our full data set below.

Are you stressed about the pandemic?

Excessive worrying can hurt us, and with the pandemic and mixed-messaging from the media and government, it’s hard to say how much we should or shouldn’t worry.

It’s unlikely that less concern yielded better results, but our survey shows that the amount of worry we have isn’t always reflected by case rates or death rates. And, from these results, it is not clear that worrying helped or hurt us.

As the country continues dealing with the coronavirus, we recommend sticking to CDC health guidelines.

For information and tips on how you can stay safe during (and after) the pandemic, check out our collection of resources:

Our State of Safety survey asked users to rate their safety concerns on a scale of one to seven, with one being the least concerned or affected and seven being most concerned or affected. Each state is ranked based on the percentage of respondents who answered in the higher range from five to seven. This survey was conducted in September 2020.

All case rates, death rates, and vaccine rates were obtained from the CDC’s “United States COVID-19 Cases and Deaths by State'' data tracker. Our report was generated on February 23, 2021 and contains data ranging from January 1, 2020 to February 23, 2021.