Kangaroo is one of the cheapest home security options out there—but does it get the job done?
Hub-free pick

Info current as of post date. Offers and availability may vary by location and are subject to change.
*Billed annually

Whether you want one sensor or a whole security system, Kangaroo has an option for you—and it won’t blow your budget.

But seriously, if you want to dip your toe into the pool (marina?) of home security, Kangaroo is the floatie that will keep your head above water while you figure out exactly what you need. 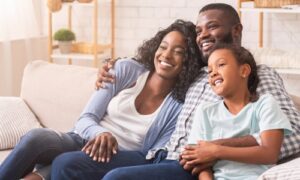 Kangaroo gives you the option to self-monitor for free or pay an annual fee for extra cloud storage and professional 24/7 monitoring. Plus, there are no contracts and no penalties.

In addition to the free Kangaroo security app, take a look at what you get with each Kangaroo monitoring plan.

Kangaroo's plans are available only as annual subscriptions—there are no monthly plan options.

Kangaroo gives you three levels of monitoring to choose from. Because the mobile app is free to all Kangaroo customers, you can keep an eye on your Kangaroo security system through the app on your smartphone or tablet.

We’ve already said that Kangaroo's prices are extremely budget-friendly. Here’s the rundown of what you can expect to pay for Kangaroo home security. 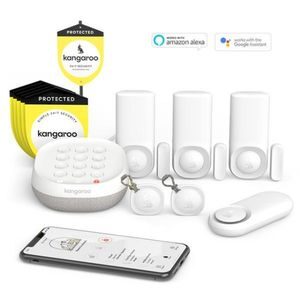 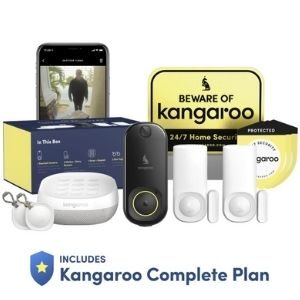 At first blush, there’s not a lot of difference between Kangaroo’s equipment and other security companies’ offerings. The aesthetic is similar to other brands like Ring Alarm and Wyze Home Monitoring—simple, sleek, and with those rounded corners I just can’t resist.

This brand also has some fun with its equipment names. Instead of offering boring, old key fobs, Kangaroo calls them Roo Tags. They do the same thing as a key fob, but they sound cooler.

What makes the siren and keypad combo so cool is that it’s not a hub for the system—it’s a stand-alone security device just like all of Kangaroo’s other equipment. Still, it's only available in a starter kits.

What makes Kangaroo’s window and door sensors better than most is that each one has a built-in motion sensor. You get the perks of two sensors in one. We like it.

Because each Kangaroo sensor also works as a motion detector, you don’t have to wait until something gets opened to get an alert. But the sheer volume of alerts can quickly get out of hand if you put one of these sensors in a high-traffic area.

We recommend thinking carefully about where you place these two-in-one babies. You can also adjust the alert settings when everyone’s at home so you don’t get dinged every time someone grabs a glass of water or heads to the restroom.

This is the most exciting piece of equipment we’ve seen from Kangaroo—and we’ve got nasty camera hackers to thank.

In light of ongoing news about security cameras and baby monitors getting hacked, Kangaroo set out to create a different kind of camera. Instead of using a mere indicator light to signal if the camera is on, the Privacy Camera actually obscures the lens when it’s not in use.

It’s kind of like fogging up the bathroom mirror, only it’s on your security camera and you don’t have to trigger it with a steamy, hot shower. If the camera isn’t in use, the lens is basically fogged up so even if it did get hacked, the creepy hacker wouldn’t be able to see anything.

We got to see the Privacy Camera in action at CES, and it was pretty impressive. This is another example of Kangaroo thinking outside the standard home security box to address a very timely customer concern.

You can pick up a Privacy Camera on Walmart's website—Kangaroo doesn't even have it on its own website. If you opt for a single camera, it’ll set you back a paltry $80.

Kangaroo's new Indoor + Outdoor Cam retails for just under $60 and comes with one year of Cam Protect.

You get the Kangaroo app for free with all Kangaroo equipment, packages, and monitoring plans. The app is where you do everything for your Kangaroo security system—from arming the equipment to setting up alerts and checking video footage.

The app is available for iOS and Android, but the reviews for iOS are significantly better than what Android users are reporting.

Android users say that setup is easy, but that the app doesn’t consistently function the way they expect. We were pleased to see quick and proactive responses from Kangaroo to frustrated customers, so hopefully that means updates and improvements are on the way.

Kangaroo’s main focus is home security, so it doesn't have many home automation features. You can add voice control with Amazon Alexa and Google Assistant—but beyond that, you don’t have any other smart home options.

At this time, you can’t control smart lights, door locks, or a smart thermostat. But the company is slowly but surely adding new functionality. Your Kangaroo siren can now listen for your smoke alarm and send an alert if it goes off.

It’s not much, but it’s a move in the right direction.

Kangaroo vs. other security brands

Kangaroo is one of the newest players in the home security space, and the company has done a good job of creating differentiators. Its porch pirate protection plan is smart and the Privacy Camera is highly innovative.

Let’s see how it stacks up to some of the most established names in budget home security.

Kangaroo truly puts you in control of your home security experience. If you only want an entry sensor and a siren, then you can have them. There’s no central hub required and no extra fees to use the Kangaroo app.

We like the low prices, but the quality definitely reflects what you’re paying for. For a new company, Kangaroo is doing a good job of setting itself apart and fulfilling its goal to make home security affordable and manageable for anyone.

If you’re a security newbie, Kangaroo is a great way to take cheap home security for a test drive. It’s low risk, low cost, and simple to set up.

Yes. All Kangaroo security equipment automatically connects to the cloud if the siren keypad loses power.

Yes. Contact your home insurance company to find out what you need to provide and what type of discount you may be eligible for. Some companies give deeper discounts to security systems with professional monitoring.

How we reviewed Kangaroo security 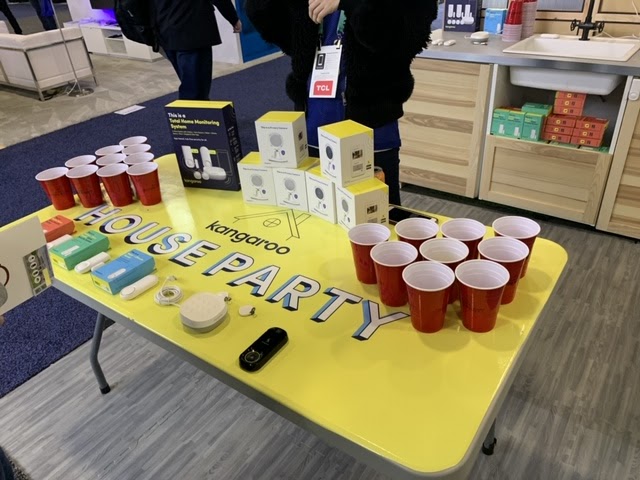 We spent time talking with Kangaroo representatives about the company, the security equipment, and its plans to make home security accessible for every budget. We also picked up some of the sensors to test at home.

On top of our demos from the company and our own hands-on tests, we sought out other expert reviews and found out what customers are saying so far. Some of the most important factors we research and compare include the following:

Find out more about our review process in our full methodology.

*Product prices and availability are accurate as of the date/time indicated and are subject to change. Any price and availability information displayed on Amazon at the time of purchase will apply to the purchase of this product. Safewise.com utilizes paid Amazon links.