Home » Home Security » The Most Burglarized Cities in Every State

The Most Burglarized Cities in Every State

The most-burglarized city in every state

We found the most-burglarized city in every state and the results may surprise you—it looks like burglars prefer small towns over big cities.

Among the cities with the most burglaries per capita, only nine (19%) have populations higher than 15,000 people. On the flipside, another nine (19%) are home to fewer than 1,000 residents.

Nationwide, burglary is the second-most common property crime, accounting for 16% of all reported incidents. But in the most-burglarized cities, that jumps up to 23%.

See where burglars are busiest in your state (and where a new security cam might help out the most) in the full list below.

In 2019, burglaries cost Americans around $3 billion in property losses, for an average loss of $2,661 per offense.¹ With so much money on the line, we were surprised to find that only 28% of Americans use a security camera to protect their property and even fewer (25%) use a home security system.² 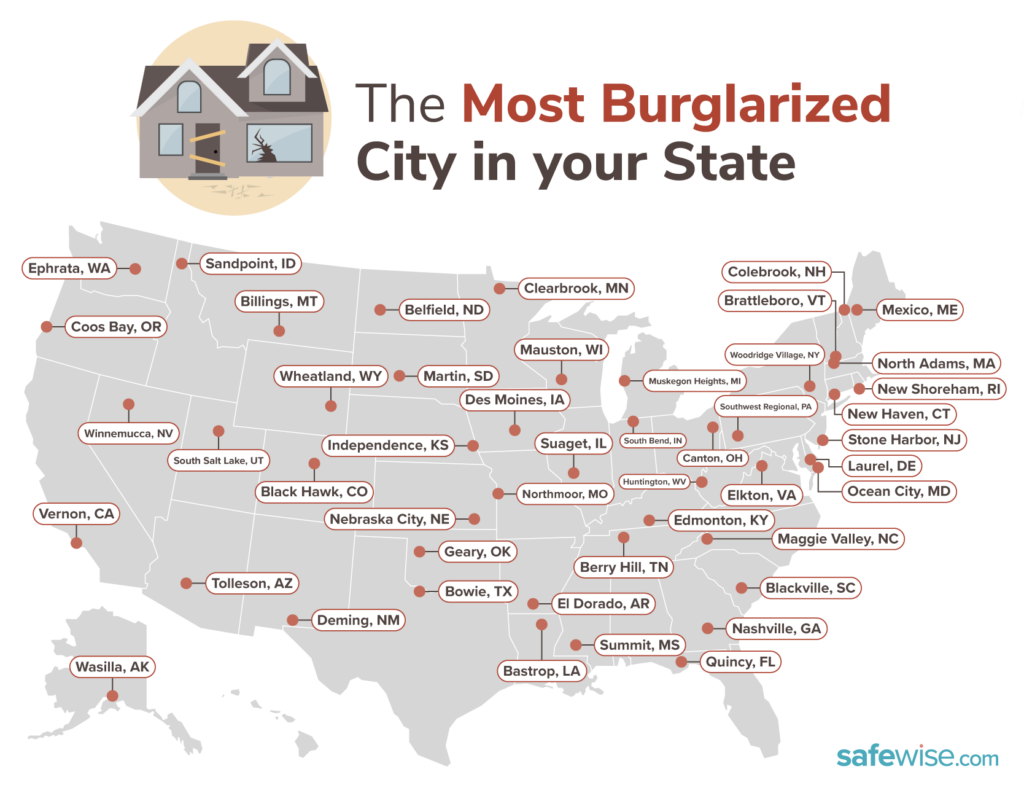 A closer look at the most-burglarized cities in every state

To find the most-burglarized city in each state, we analyzed the most recent FBI burglary statistics and population data.2 We excluded cities with populations below 100 and any that didn’t report complete data to the FBI in 2019 (the most recent year for which data was available).

Alabama and Hawaii were excluded because there weren’t enough city data to analyze; only one city in each state provided burglary data in 2019. Washington, D.C. was also excluded.

Written by
SafeWise Team
The SafeWise Team is here to help you keep your home and family safe. Whether you’re looking to pick a security system or identify and remove common risks in your home, we’re here to help you find the best products and well-researched answers. At SafeWise we combine our years of experience in home safety and security with user reviews and feedback to help take the guesswork out of living safe.
Read More