While it can affect your system resources, we didn't notice anything significant during our system scan tests. Check out our full Bitdefender review to compare Bitdefender plans and the competition.

The Bitdefender Family Pack offers the same benefits as Bitdefender Total Security but covers 15 devices. This is especially helpful because it's easy for families to blast past the five-device limit on Total Security.

While our Bitdefender review focuses mainly on the three products above, the company also bundles Bitdefender Total Security antivirus protection with other types of cybersecurity software. 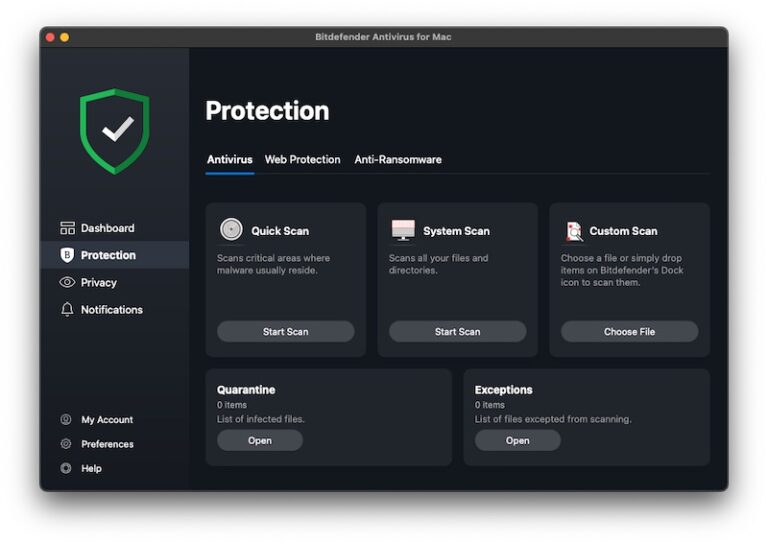 While we tested Bitdefender Total Security's free trial for this review, we depend on the good folks over at AV-Test and AV-Comparatives for long-term data on how well Bitdefender runs. Here's the short version if you don't care about the technical aspects: Bitdefender performs really well in these independent tests, but it can slow down your system more than other brands.

To skip the nitty-gritty details below, you can jump to our impressions of Bitdefender's features.

In the recent April 2022 Windows tests from AV-Test—which covers April and March—Bitdefender saw a slight drop in Protection scores compared to the previous test in February. It dropped from a perfect 6 to 5.5 because it spotted slightly fewer zero-day malware attacks than the competition during March.

Fortunately, the April tests caught every malware sample, so we're confident Bitdefender can keep up with the latest threats. During the same period, Bitdefender scored perfect sixes in AV-Test's other two testing categories—Performance and Usability. It's unlikely to cause too much slowdown on Windows computers and is easy enough to use.

The AV-Comparatives April 2022 performance tests also show Bitdefender scoring very well—earning the top rating, Advanced+. It produces excellent download speeds, file copying, browsing the web, and installing apps. Still, AV-Comparatives notes that Bitdefender can delay the time it takes to launch applications, and it has a greater impact on system resources than competitors like K7, Panda, and ESET.

On Macs, AV-Test gave Bitdefender a 5.5 for performance, noting that the antivirus software put a significant drag on installing other apps. It also slows down file copying on Macs more than other brands. Still, it scored sixes for protection and usability, helping it keep up with AVG, Norton, F-Secure, and Trend Micro. Bitdefender also passed the most recent AV-Comparatives Mac Security Test.

Bitdefender Mobile Security for Android performed well in the latest tests from AV-Test and AV-Comparatives. Neither organization tests on iOS devices. 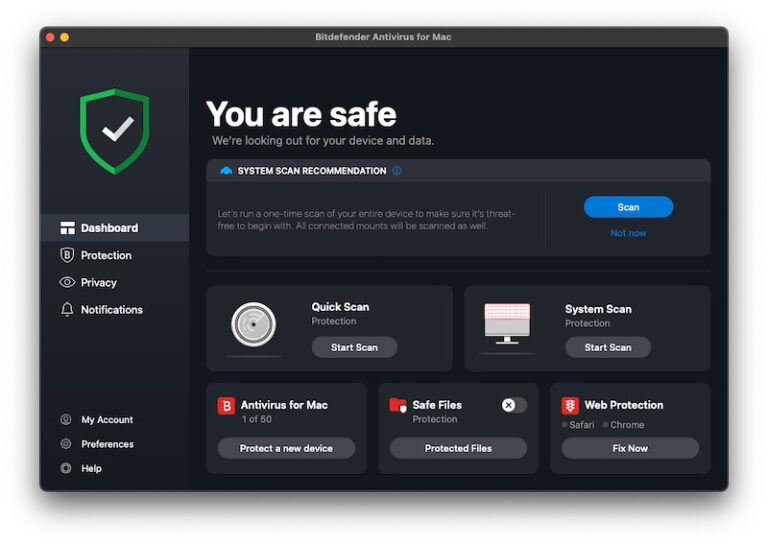 Bitdefender Shield constantly monitors new threats and updates its software daily to keep you safe from viruses, spam, phishing scams, ransomware, Trojans, worms, spyware, adware, rootkits, and zero-day vulnerabilities. That's quite a mouthful, but malicious software takes so many forms that it's hard to keep track of them when you just want to use the internet in peace.

One of our favorite features is the Vulnerability Assessment. It helps you keep your computer up to date by looking for apps that need new updates and double-checking your settings to make sure you don't accidentally leave the door open for malware.

Bitdefender's privacy firewall can help prevent unauthorized access to your home network and computer by filtering incoming traffic that doesn't meet security standards. Although this security feature won't prevent viruses from infecting your system, it can keep them from using internet connections.

All Bitdefender antivirus subscriptions include access to a free VPN that protects up to 200 MB of data each day. This isn't much data compared to a similar service from ProtonVPN, but we appreciate that you don't need to pay extra.

While you can sign up for the Bitdefender Premium VPN to remove the data cap and unlock more features, dedicated VPN apps tend to perform better than the ones offered by antivirus companies. We recommend checking out our list of best VPN services for better VPN options.

It takes time for kids to learn how to stay safe online and gain time management skills for healthy entertainment habits, but that doesn't mean they should avoid the internet or video games. We think Bitdefender's parental controls strike a good balance of protecting your children while giving them the freedom to discover fun projects and hobbies.

Bitdefender helps you track your child's activity and minimize the chances of them stumbling across inappropriate content through robust web filtering. It even works on their smartphone. We also like that you can set limits for screen time to encourage your kids to go to bed on time.

While you can buy standalone versions of Bitdefender Mobile Security for iOS and Android smartphones, we like that they work with your Bitdefender Total Security subscription.

Bitdefender Mobile Security for iOS builds on Apple's excellent security features with enhanced web protection and account privacy tools. You can also use the same Bitdefender VPN that comes with the desktop app.

Bitdefender Mobile Security for Android uses Android's flexibility to add extra features to keep your phone secure. In addition to web protection and the free VPN from the iOS app, there's a nifty Scam Alert tool that helps you spot phishing attacks in your messaging apps.

The Android app's WearON and Anti-Theft features help you track a lost smartwatch or smartphone. This is useful, but they're fairly similar to the Google Find My Device app. Still, we like that Bitdefender Mobile Security will take a photo of the person trying to unlock your lost phone to aid in recovery. 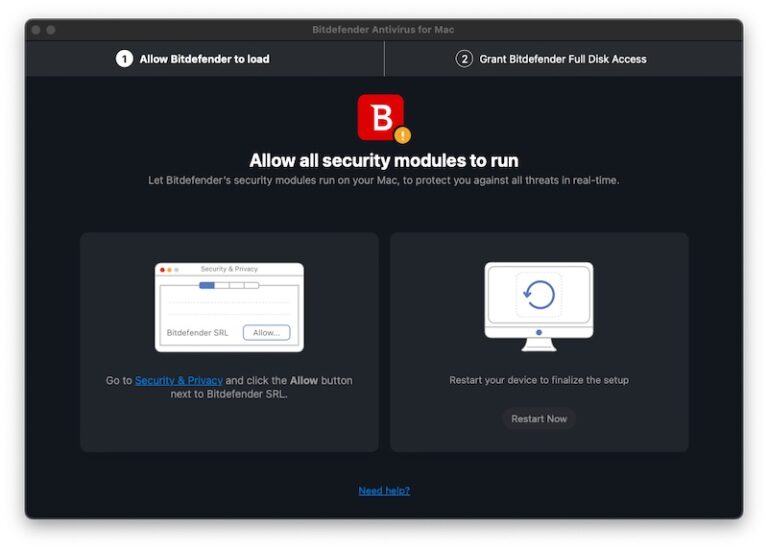 Bitdefender is almost as easy to install as any run-of-the-mill computer program. We downloaded our trial copy on a Mac after signing up for a Bitdefender Central account, with the whole process taking around 10 minutes.

During installation, Bitdefender asked for Mac security permissions, and we needed to restart our computer for everything to take effect. There was a noticeable improvement in its time to scan for malware after the restart. The installation process is nearly identical for PCs, but you don't need to grant any security permissions on that system.

For mobile devices, you'll need to download Bitdefender Mobile Security from your phone's app store and sign in to your Bitdefender account—iOS and Android require some permissions for Bitdefender to run.

Bitdefender has an extensive support database with tutorials, videos, and articles to help you use and troubleshoot your software. While your fastest answers will come from the search box, you can narrow down articles by product type to browse related pages and topics.

We love the online forum—Bitdefender Expert Community—where you can connect with support agents and other users in a more informal environment. It's a great way to find ultra-specific advice for your Bitdefender software. You can also contact Bitdefender support directly via email, phone, and 24/7 live chat if you don't find an answer to your problem.

Bitdefender Total Security is our pick for the best antivirus software because it has a long track record of excellence for preventing, detecting, and removing malware from your computer. We love that it comes with multi-platform support for up to five devices.

The Bitdefender VPN and parental controls are nice bonuses for folks who want to control everything from a single app but don't perform as well as standalone software. Bitdefender can also reduce your system performance, but it's less intrusive than the average antivirus program. Check out our best antivirus review to see how Bitdefender stands up to the competition.

Is there a better antivirus than Bitdefender?

While Bitdefender had a slow start in the early days of independent test organizations like AV-Test and AV-Comparatives, it's been a top performer in most testing for about a decade. This means you'll see it at or near the top of numerous expert rankings across the internet, including our own.

Bitdefender isn't always perfect, and neither are its competitors, so we think it's the best option for most folks. But if you want a solid Bitdefender alternative, ESET is a great choice, though more expensive if you wish to protect multiple devices.

Does Bitdefender slow down computers?

Most antivirus software affects computer performance, and Bitdefender is no exception. Still, it ranked seventh-fastest—out of 17 products—in the latest round of performance tests from AV-Comparatives.

How we reviewed Bitdefender antivirus software 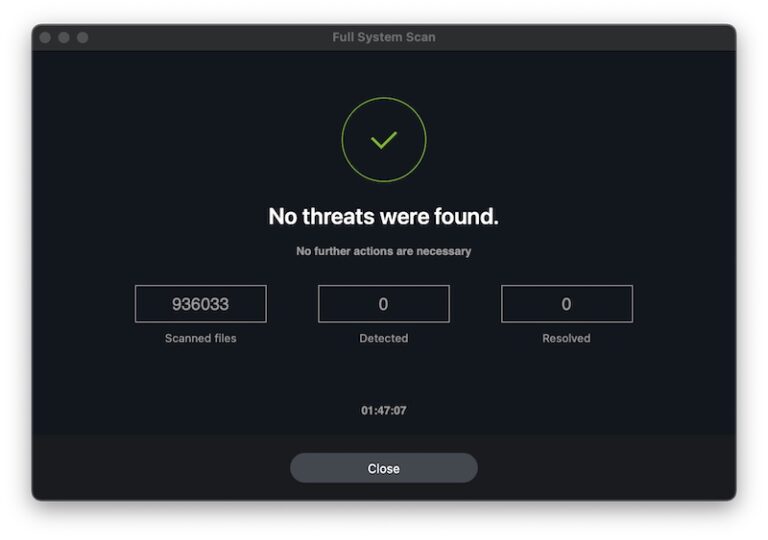 To prepare for this review, we installed a Bitdefender Antivirus free trial on a MacBook running macOS Monterey. This helped familiarize us with Bitdefender's features and run system scan tests to see if there was any noticeable effect on our computer.

We also looked at Bitdefender's usability and customer resources to see how user-friendly it is. We have experience using Bitdefender's PC and mobile device versions, and we plan to test these more in future updates.

Our hands-on testing was minimal because we relied on data from two independent cybersecurity organizations with long histories of testing various antivirus programs: AV-Test and AV-Comparatives. Both organizations perform numerous tests every year and are the top authorities on antivirus software.

Learn more about our approach to testing and reviewing products in our full methodology.