Best and Worst States for Driving in Bad Weather

Floods and tornadoes may get all the headlines, but neither is the deadliest weather hazard. It’s driving in winter weather.

In 2016, floods and tornadoes were responsible for a combined 144 weather-related fatalities across the US.¹ That same year, more than 2,800 lives were lost due to snow and rain on American roads.² Winter road conditions like sleet, ice, snow, and freezing rain make getting behind the wheel a risky move.

With winter weather lurking in the wings it’s only a matter of time before the 2017 winter crash numbers start to climb. To better understand the risks—and pinpoint the roads to avoid when Jack Frost gets up to his mischief—we’ve identified the ten most dangerous states for both rain and snow driving.

Best and Worst States for Driving in Rain 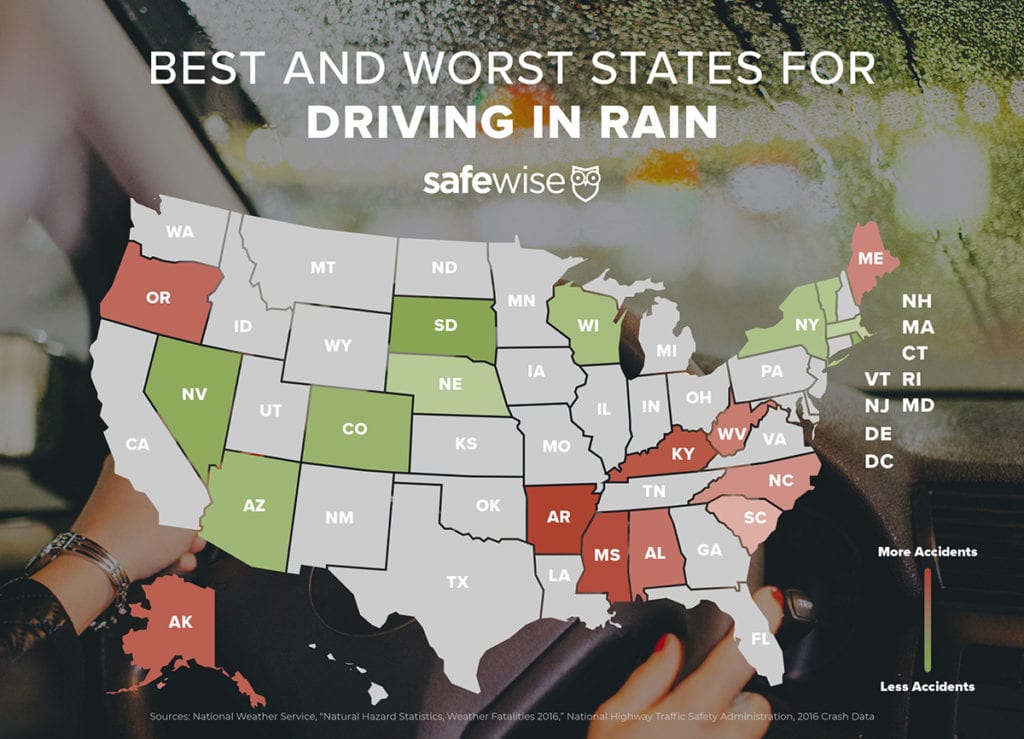 Top 10 Most Dangerous States for Driving in the Rain

Best and Worst States for Driving in Snow 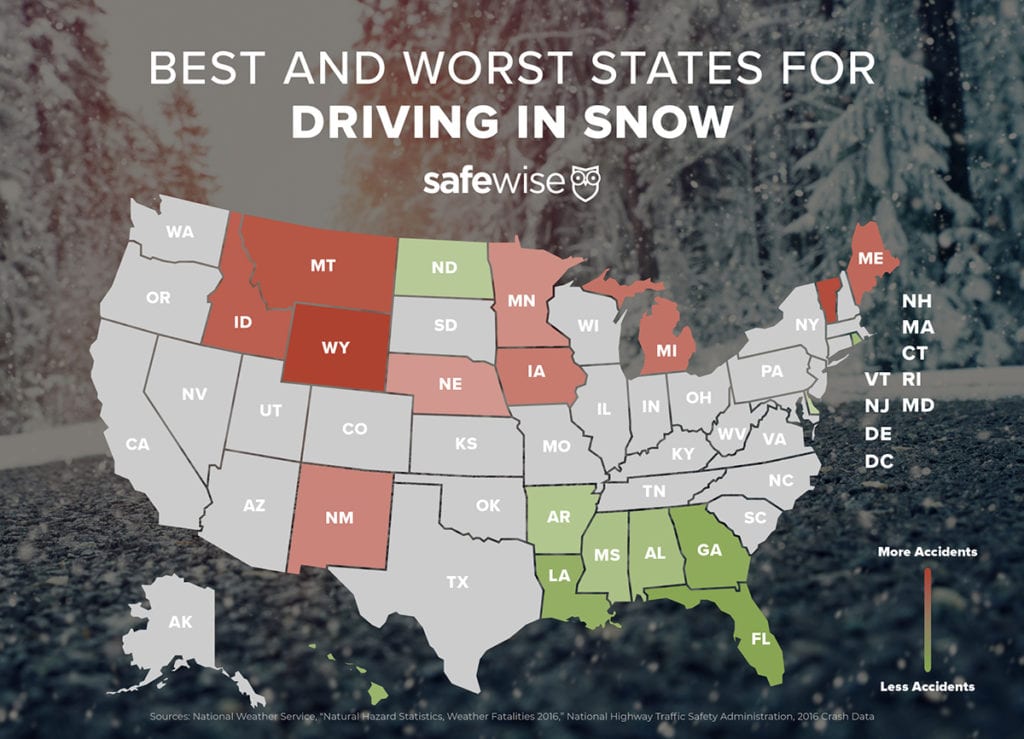 Here’s a look at some of our findings:

What Are Your Chances of Being in a Weather-Related Crash?

Depending on the state you live in, your odds of ending up in a tailspin on slippery roads can vary greatly.

If you see your state in the tables above, that means you’re at the top of the list, but folks in South Dakota, Nevada, and Rhode Island can relax when they hit the road during a rainstorm. Residents in those states have a less than 0.20 chance in 100,000 of ending up in a rainy road crash.

For snow, the safest states are Florida, Georgia, Louisiana, Hawaii, and Rhode Island—where there were zero rain- or snow-related crashes in 2016. Although most of those states see nary a snowflake, Rhode Island logs an average of thirty-three inches of the fluffy stuff every year. 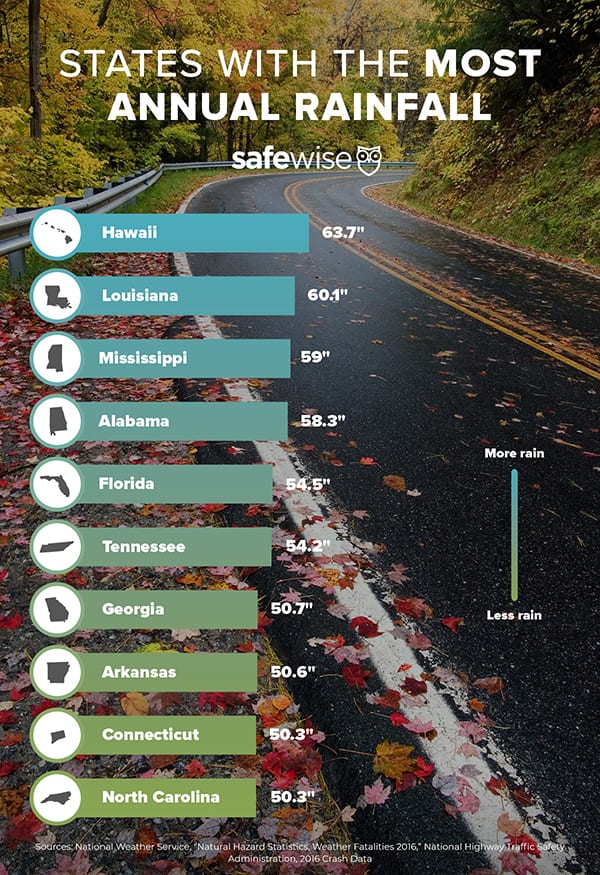 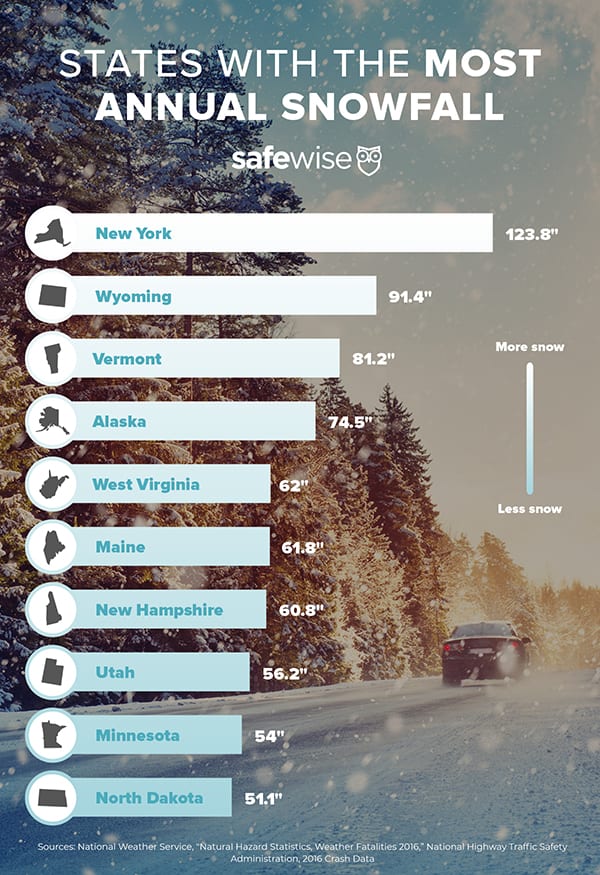 Regardless of weather, your odds of dying in a car crash are one in 114.³ Obviously winter weather impacts those chances, but you don’t have to trade in your car for snow shoes. There are some simple things you can do to improve your odds on treacherous roads.

Getting behind the wheel isn’t always dangerous, but adverse weather can turn a quick trip to the store into a nightmare. Whether or not your state ranks as one of the most dangerous for rain and snow driving, make sure you’re prepared to stay safe on the road this winter.

SafeWise analyzed the number of fatal car crashes due to rain and snow in each state using the National Highway Traffic Safety Administration's (NHTSA) 2016 crash data. From there, we calculated the likelihood of inclement weather accidents occurring per 100,000 people in each state.