Home | Safety News | The Facts behind True Crime: Is Murder Really a Threat?

The Facts behind True Crime: Is Murder Really a Threat?

From your grandmother’s collection of cheesy mysteries to podcasts that make you afraid to walk home alone, accounts of murder follow us everywhere. But is the world really as dangerous as these stories make it out to be?

Who are the victims and who are the killers, really? Where does fiction end and fact begin?

To find out, we compared our State of Safety report to five years of FBI statistics. Turns out murder is a lot less common than people think it is.

But with the popularity of crime stories, it’s easy to feel like there’s a threat around every corner. Get the facts by finding out which states actually rank highest and lowest for murder. 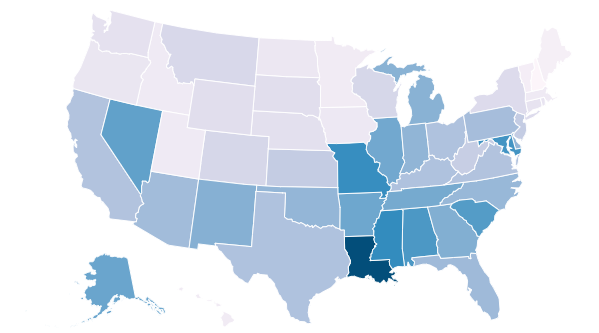 These 10 states have the highest and lowest murder rates in the US. The averages in parentheses represent the number of people per 100K murdered in each state.

The Context behind the Crimes

Our State of Safety survey highlights the safety and security concerns of average Americans. According to our data, young women were most worried about being murdered. Of those we surveyed, 50% were afraid of being killed by a stranger, and 26% were concerned about being killed by someone they know.

Tips for Staying Safe in Your Neighborhood

For many in the United States, bad health habits like smoking or unsafe driving are more likely threats than murder. While heart disease, cancer, and traffic crashes are the leading causes of death in the US, you’re more likely to live a long healthy life than you are to die early.

As of 2017, the average life expectancy for Americans is 78.6 years. Our country also has over 70,000 centenarians. The best way to live this longis to stay in safe and familiar environments, get regular exercise, follow a healthy diet, and avoid stress.

Be aware of your surroundings

When traveling throughout your city, keep your destination in mind and how you got there. Watch for suspicious activity on public transit, on the street, or in your neighborhood.

Paying attention to dangerous situations can be your first line of defense and help you escape a bad situation before it gets worse.

The FBI reported over 2,000 homicides in 2017 in conjunction with unlawful activity. Like we mentioned before, murder victims are more likely to know their killer, so it’s best to avoid interacting with those who participate in criminal activity.

Listen to your intuition

If a situation feels dangerous, get out. You can take a walk, call a trusted friend or relative to pick you up, or just get away the best way you can.

If you are in an abusive relationship and fear serious injury or death, you can get help through an organization like National Coalition Against Domestic Violence +1-800-799-7233. Organizations like these can provide guidance and resources to get you out of a bad situation with a friend, partner, or relative.

Participate in your community

If you live in an area with a high crime rate and want to make a difference, volunteer or donate to organizations that help lift people out of poverty. Homeless shelters, youth outreach organizations, food drives, and other nonprofits can connect you with those in need.

Safer Than You Think

New podcasts, TV shows, and books highlighting murder cases pop up every day. And that’s to say nothing about what we read in the news. Americans may always be fascinated with violent crime—especially homicide—because it can feel so close to home.

But the reality is murder is tragic but still uncommon in our country. You're more likely to live a long life than run into the next Jack the Ripper.

Written by
Katie McEntire
As a renter, pet-owner, and woman living alone, Katie McEntire takes safety seriously. She’s tested devices like pet cameras, home security systems, and GPS trackers in her own home and devices in the name of safety. In addition to testing, writing, and reviewing for SafeWise, she also makes videos for the site’s YouTube channel. She’s been featured on publications like TechGuySmartBuy, Forbes, Healthy Moms, and Digital Care. Katie has a Bachelor’s degree in Technical Writing from Austin Peay State University in Clarksville, Tennessee. She’s held previous writing positions at Overstock.com and Top Ten Reviews.
Read More