Home » Home Safety » How to Keep Your Roof Clear of Snow

How to Keep Your Roof Clear of Snow

Icy winter landscapes are beautiful, but they can prove burdensome to homeowners. As snow piles up, all that weight equates to structural stress, especially for buildings with flat roofs.

If your home has a roof with a substantial pitch, ice dams and clogged gutters can still prevent snow from sliding off. Heavy loads of wet snow can eventually lead to shingle damage, stress on load-bearing walls, and even roof collapse.

Removing snow from your roof is a slippery undertaking. Rather than climbing a ladder in the cold or risking a dangerous fall from icy overhangs, we’ll teach you how to keep snow off your roof in the first place.

How to keep snow off your roof 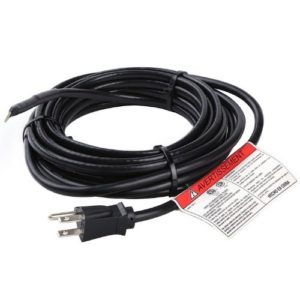 An ice dam is just what it sounds like—ice build-up that blocks off sections of your roof and prevents snow from sliding off. And it’s not just snow that can spell trouble for your roof. Ice weighs more than 57 pounds per cubic foot, a load your roof isn’t necessarily equipped to handle.¹

Fortunately, ice buildup and dams are fairly easy and inexpensive to avoid. Invest in heating cables to help the snow slide right off your roof’s back. Position them along sections of the roof or in gutters to prevent icy build-up. But keep an eye on your energy bill and be sure to unplug them when warmer temperatures arrive.

The Heat it HIRD de-icing cable are weather-resistant and insulated electric cables that warm up your downspouts and overhangs, keeping ice out of the eaves. They’re safe to use with metal roofs and roofs with non-combustible shingles.

See our recommendations for other snow safety products that are worth the investment.

2. Calculate snow load on your roof 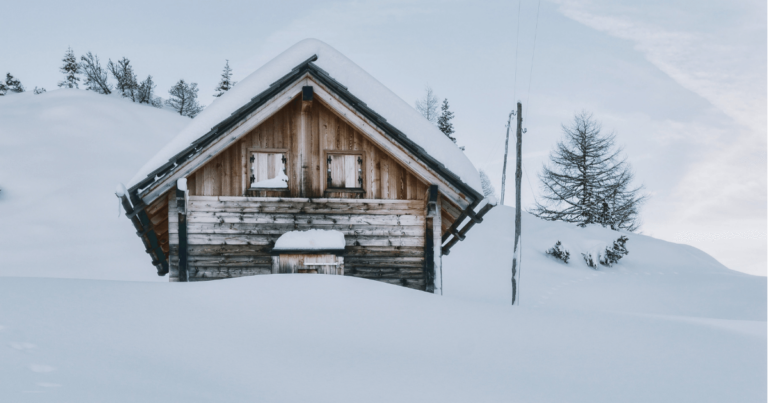 While most roofs are designed to hold up to 20 pounds per square foot according to modern building codes, older structures and those with flat roofs may struggle under the weight of even moderate snow accumulation.²

And not all snowstorms are created equal. On average, relatively dry snow weighs around 5 pounds a foot, while wet snow can tip the scales at more than 20 pounds per foot.³

To calculate the snow load on your roof, assume that every inch deep of snow equals 1.25 pounds. Your equation for determining snow load, S x 1.25 = P, is fairly straightforward math. S equals the depth in inches of the snow on your roof and P represents the pounds per square foot your roof is supporting.

Here’s an example. If a snowstorm just dumped about 9 inches of heavy snow on your roof, the equation to determine snow load is 9 x 1.25. That works out to be 11.25 pounds per square foot. According to our math in this example, your roof is probably doing just fine.

Signs your roof is compromised by too much snow

If you’re still unsure whether your roof is risking damage after a heavy snowfall, FEMA advises homeowners to look for these warning signs.⁴

Excessive snow accumulation can be the result of ice dams, unbalanced snow load, heavy snowfall or rain, or just simple roof geometry working against you.

Consider consulting with a contractor before next winter to determine what you can do to increase the pitch of your roof and ease the burden of heavy snowfall.

3. Remove snow from your roof with a roof rake

Never get up on a ladder or on your roof to remove snow. In addition to the hazard of slippery rungs, you would be adding weight to the heavy load your roof is already struggling under.

Here’s what to do instead. First, inspect your roof for loose shingles that could catch on the roof rake. Then scan the area for power lines or tree branches that could interfere.

Start at the edge of your roof with the rake and work you way in, being careful to leave several inches of snow to avoid scraping the shingles and causing costly roof damage.
Last but not least, removing roof snow with a rope is a “don’t try this at home” strategy. While it looks impressive on YouTube, it’s still dangerous because it requires climbing on your overloaded roof to secure the rope.

See our winter safety guide for homeowners for more tips on home safety in the winter.

4. Call in the professionals to remove snow from your roof 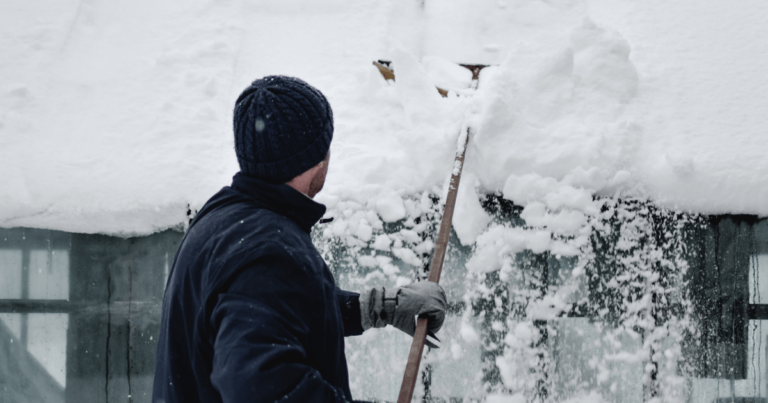 For safety reasons, we recommend letting a professional remove snow from your roof for cases when a rake won’t cut it. This is especially critical if you have a flat roof that requires shoveling or heavy snowfall that needs a snowblower.

Roof snow removal services are less expensive than you might think—especially when you consider emergency costs for slipping and falling or the kind of damage your home could sustain if the roof collapses.

Looking for a licensed snow removal specialist in your area? Let Thumbtack help. Thumbtack lets you search for local professionals and hooks you up with free estimates for various services in your zip code.

If you have a steeply pitched roof, chances are your roof is relatively safe during normal snow accumulation. But older buildings and those with metal surfaces or flat roofs require prompt snow removal after heavy snowfall to avoid structural damage.

And if you own a home with solar panels, you should frequently remove snow and ice build-up so the panels stay powered up and on the grid.

Most roofs are designed to hold up to 20 pounds of weight per foot. But since snowfall accumulation of a foot or more can weigh at least that much, you’ll want to keep a close eye on your roof and look for signs of structural stress. When in doubt, it’s best to pick up a roof rake or call a professional.

For a home of about 2,500 square feet, snow removal services will charge anywhere from $100 to $300. Prices vary greatly depending on the location and square footage of your home, so it’s best to ask for an estimate upfront.

Written by
Kaz Weida
Kaz is a journalist who covers home security, parenting, and community and child safety. Her work and product testing in the security and safety field spans the past four years. You can find Kaz in HuffPost, SheKnows, Lifehack, and much more. Her degree in education and her background as a teacher and a parent make her uniquely suited to offer practical advice on creating safe environments for your family.
Read More