By Katherine Torres
Contributing Writer
Share Article
SafeWise is an independent review site. We may earn money when you click links on our site. Learn more.

It looks like this camera and the next generation are both discontinued. Check out our list of top home security cameras.

The Bottom Line: Affordable and Easy to Use

If you’re looking for a basic security camera, the Vimtag P1 is straightforward and excels at DIY surveillance. The  affordable price tag outweighs the camera’s drawbacks, especially when you take into consideration the product’s ease of use.

No contracts or monthly costs

Why Choose the Vimtag Camera? 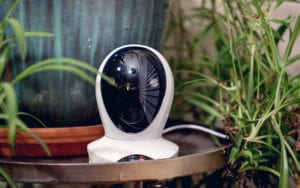 After a string of burglary and vandalism incidents in my neighborhood, I wanted to stop relying on my dogs to ward off intruders and make my home a little more secure—starting with an indoor security camera.

I’m not especially tech savvy, so in order for the security camera to work for me, it needs to have a user-friendly app, as well as remote control and night vision. I don’t mess around with cloud storage—I like knowing where my assets are being stored, so I prefer micro SD storage. Features like two-way audio and live video are appealing, but aren’t mandatory.

Coupled with the fact that I’m impatient (and as a result don’t always read directions), I also need the security camera to have a straightforward design and be easy to use. Conveniently enough, the Vimtag P1 checks all the boxes.

Prior to this review, I didn’t know much about Vimtag products or the company. But after some research, I learned that Vimtag debuted its first line of security cameras in 1999. Fast-forward almost ten years later, and the company is still producing positively reviewed, quality cameras, so I figure they must be doing something right. 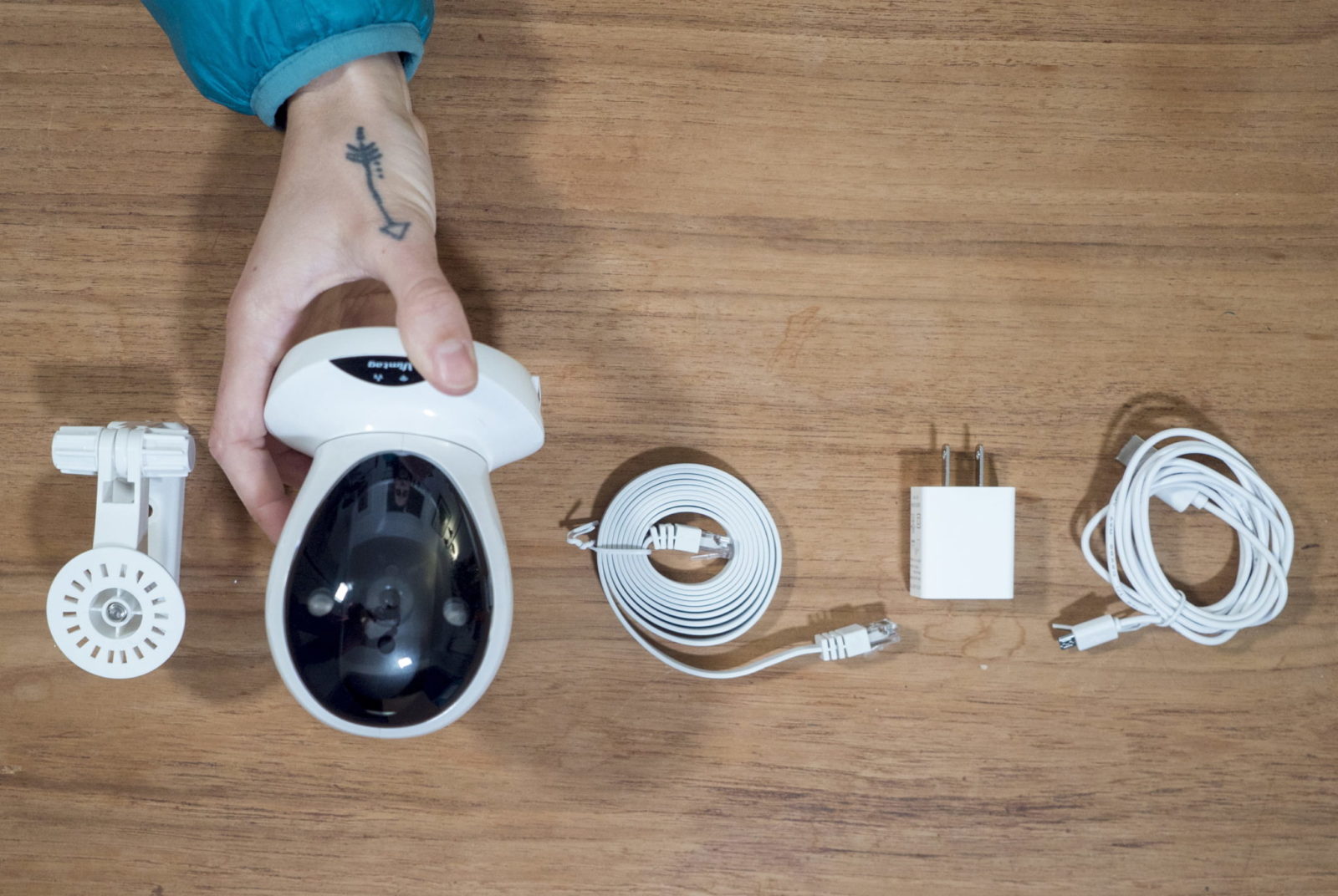 What’s Included in the Box?

In the box, you’ll find the P1 camera, a wall mount (screws included), a power cable, and an Ethernet cable. There is a QR code under the camera’s base, which you scan into the app when setting up the device to make sure it’s synced correctly. This was particularly handy and made setup a little easier.

While the Vimtag P1 has a sleek silhouette, it doesn’t have the subtlest design—it looks a lot like a small fencing helmet with beady little eyes. If I were a thief, I’d easily spot it. Because of this, I tried to camouflage the device by setting it up near a plant with a full view of the main entrance and front rooms. I do have a relatively small house, so this position allowed me to see if the dogs were growling at the mail carrier or if someone had actually broken into the house. 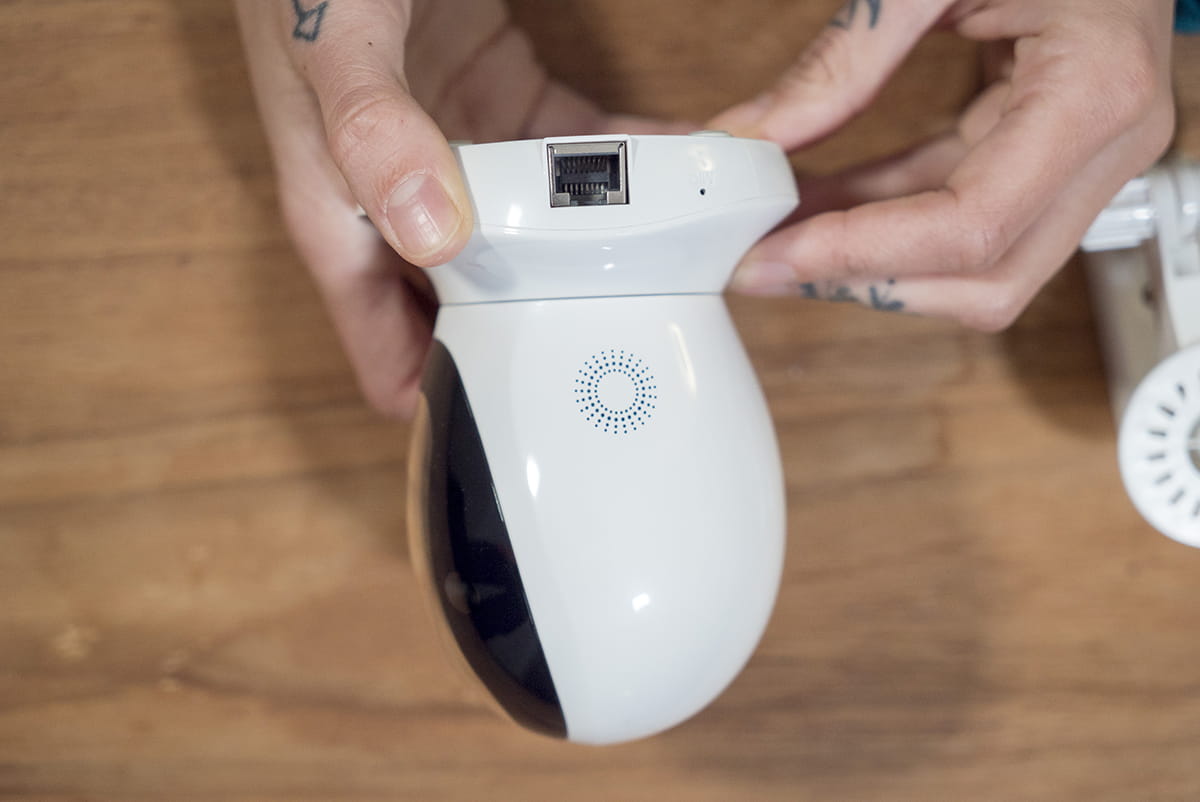 How the Vimtag P1 Stacks Up

As I mentioned before, I’m often duped by technology—and admittedly I had a bit of a learning curve while using the P1. But once I got over the user error, using the device and app for DIY surveillance felt natural and easy. One of my favorite features is the two-way audio: At one point, I caught the dogs ripping up one of their toys, and I was able to stop them from shredding the poor stuffed animal to bits by speaking to them through the camera.

Varied Camera Capabilities
Between the remote control, night vision, pan-and-tilt, zoom, and HD video, the possibilities offered by this oddly shaped camera are relatively boundless. The night vision component is a helpful feature if you have the camera installed in a child’s room, and the 4x digital zoom can magnify details or images, allowing you to see even the smallest things.

Quality Two-Way Audio
With this feature, you can have a two-way conversation with people or animals in the room. So if someone breaks into your house, you can startle the burglar, let them know someone’s watching, and call the police. Or you can use the P1 to play practical jokes on your significant other from a few rooms over. The sharp audio quality means whoever is there can hear you loud and clear.

Myriad of Storage Options
While some devices require a cloud subscription, the P1 has a micro SD card that stores video footage and snapshots. But if you want more storage, Vimtag has cloud storage as well as a Cloud Box available for purchase. The Cloud Box is like an external hard drive for your surveillance footage, so you don’t have to purchase mass quantities of micro SD cards for the sake of storage.

Wi-Fi or Ethernet Connection
The Vimtag P1 can connect to your internet via Wi-Fi or an Ethernet cable, which is handy for folks who live in areas with poor Wi-Fi connections.

My husband is more technologically inclined than I am, so I asked for his unbiased opinion on whether or not this camera was as easy to use as I felt it was. His verdict:

“My favorite aspect of the camera was that I was able to set it near a window, and with a simple swipe left or right I could keep an eye outside for a package delivery on the porch or just watch the dogs snooze on the couch. The iOS app runs smoothly enough that I’m able to leave it open on my phone while I’m at work, and it feels like I’m still at home hanging out.”

Resolution
The P1 has only 720p resolution, which impacted video quality slightly. Other equally well-performing cameras (like the Samsung SmartThings series) have a higher resolution. If Vimtag wanted to raise the bar a little, I’d recommend increasing the resolution quality.

Wired Design
I wish Vimtag equipped the P1 with a backup battery. The wired design is a bit cumbersome, especially if you don’t have the option of connecting the device to your Wi-Fi. Not only that, but if the power goes out, the security camera is useless. And if a burglar spots the device, they could easily unplug it and sever your connection with the camera.

The P1 has a futuristic, yet innocuous, pod shape that’s designed to mimic a fencing helmet. Why Vimtag opted to pull its design inspiration from fencing is beyond me, but it does have an attractive look.

Sleek Aesthetic
Regardless of where your taste lies on the home decoration spectrum, the P1 has a smart look and feel. The smooth lines work well with modern and 1960s retro décors (or plant life) alike, so you can seamlessly and covertly integrate the P1 into your home.

Wall Mount Included
I can’t tell you how many times I’ve had to haphazardly rig a light or sensor, much less a smart home product, to a wall or beam because the company didn’t provide a wall mount. Thankfully, the folks at Vimtag thought to include a mount with the camera, which provided me with any variety of placement options.

Large Silhouette
While the camera is aesthetically pleasing, it’s not the most inconspicuous device. I chose to hide it near a plant, which impacted the camera’s visibility a little but kept it discreetly out of sight. 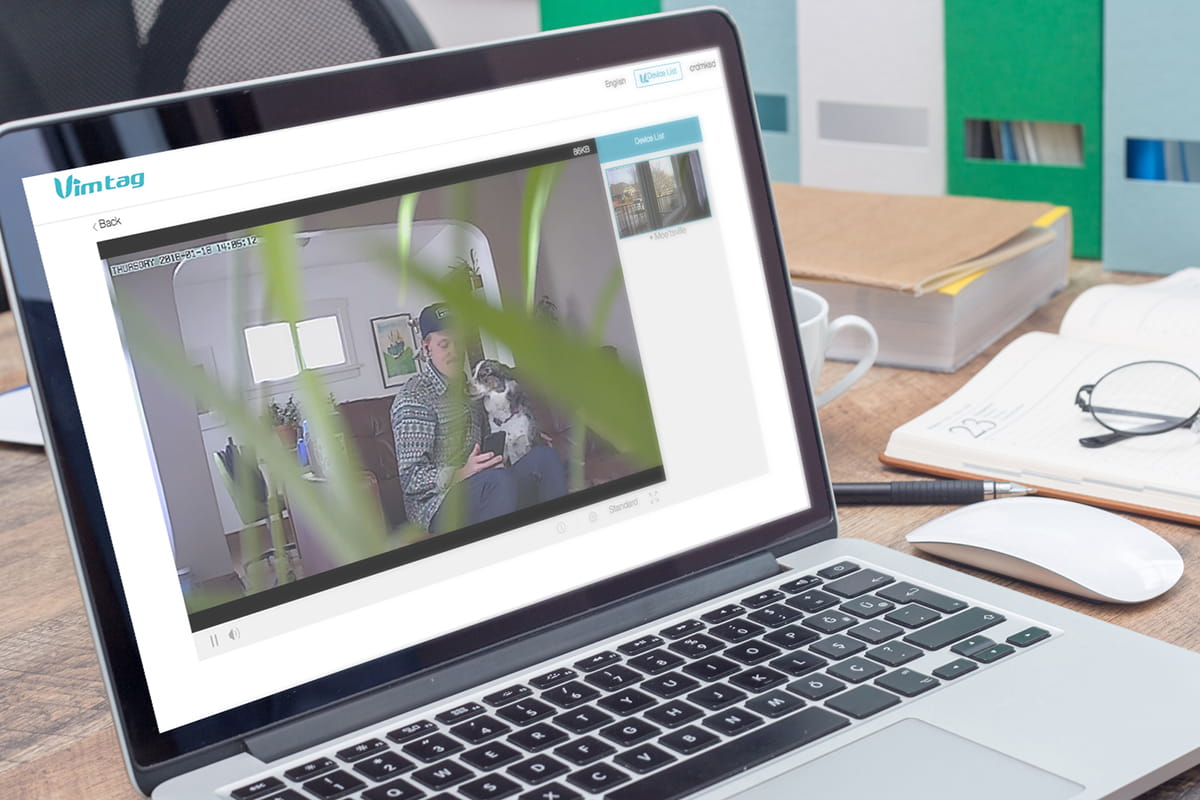 One of the things I really liked about Vimtag is that the company gets that everyday people (like me) can find technology overwhelming and overly complicated, which is why it creates simple, straightforward devices. The P1 stays true to uncomplicated design with its easy-to-use remote control and app interface.

Remote Control
All you have to do is swipe up, down, left, or right and the camera moves. There is a bit of lag time, but I found that a stronger Wi-Fi connection led to a faster response time.

Password Security
The prospect of having your home security camera hacked is scary, but Vimtag’s assigned passwords are super secure. If you change the password, go with something that’s hard to crack, and be sure to store the information in a password app.

App Interface
Both the computer and app interface are quite good and easy to navigate. You’ll need to download the app in order to set up the device—head to your phone’s app store to find it.

To access the P1 from your computer, I recommend going to Vimtag.com and downloading the platform directly. Don’t try to use the app through the website—I had a terrible time trying to log in, and the website kept kicking me off. I say skip that step, save some time, and go directly to Vimtag.com if you want to survey the home scene via the computer.

Installation
While other customers stated that the installation process was foolproof, my experience was quite the contrary—it was extraordinarily frustrating! The camera would not sync up to the Wi-Fi and emitted a truly terrible, high-pitched noise as it attempted to connect, and then it made an equally awful noise when it couldn’t make the connection.

The P1 has customizable alerts that can be sent to your phone, so you can react quickly to potential threats.

Phone Alerts
You can personalize these alerts for your home by creating a motion sensitivity zone, which prevents your furry friends from sounding the alarm or sending you into a tizzy prematurely.

Slow Alert Time
Unfortunately, technology isn’t perfect: the P1’s alert time is a bit slow, which can impact your window for reacting to a burglar.

When comparing the Vimtag P1 to other similar security cameras like the Nest Cam, the cost is relatively low and reasonable. Not to mention the P1 puts the cost of a professional monitoring service to shame.

No Contracts or Monthly Cost
Unlike professional monitoring services or cameras that require a cloud subscription, the P1 needs only a micro SD card, which costs $20 at most.

Required Storage Purchase
If you don’t already own a micro SD card, you’ll have to buy one in order to store any snapshots or video recordings.

In your smartphone app go to Settings > Motion Detection > Enabled. From there, you can customize with Mask Settings to create motion sensitivity zones. Additionally, you can choose how you want to store the detected motion (for example, if you want a video or a snapshot).

Yes. My husband and I both accessed the camera via the app—at the same time. That said, I’m not sure if you and another user can use the two-way audio simultaneously.

Yes. Because the P1 uses the internet to send data over, it’s a proper IP surveillance camera.

No. You can also use the P1 as a nanny cam, pet cam, or baby monitor. Just know that you’ll receive push notifications or alerts only for motion-related incidents (not sound).

How We Evaluated the Vimtag P1 Camera

We looked at the following criteria: features, ease of use, alerts, cost, customer service, and consumer interest.