Home » Home Safety » 8 Ways to Stay Safe in the Kitchen

8 Ways to Stay Safe in the Kitchen

The kitchen is the heart of your home, but it can also be surprisingly dangerous. Consider that a kitchen is equipped with sharp knives, hot exposed surfaces, pots of boiling water and pans of sizzling grease; it’s no wonder that every year thousands of Americans are seriously injured in the kitchen.

Whether you’re a budding Martha Stewart or a veteran chef, our kitchen safety tips will give you food for thought that could help you avoid becoming a kitchen injury statistic.

How to stay safe in the kitchen 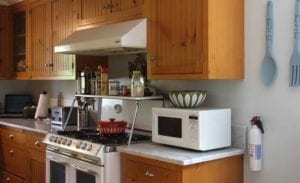 When you’re preparing dinner while nagging teens or tugging toddlers are begging for their evening meal, it’s easy to spill a thing or two. When you do it’s critical that you clean it up quickly to prevent an accident. Even a small amount of water or food creates a slipping hazard. Grease and oil from cooking sprays are especially dangerous.

Most people aren’t aware that homes without smoke detectors are twice as likely to have a fire.1 And guess where an abundance of house fires start? Yes, in the kitchen. In fact, nearly 173,000 cooking equipment fires occur each year.2 Early detection is vital to surviving a house fire. Make sure your home is equipped with smoke detectors, which often come with the best security systems, and test the detectors quarterly.

3. Know the fire extinguisher is the most important gadget in your kitchen 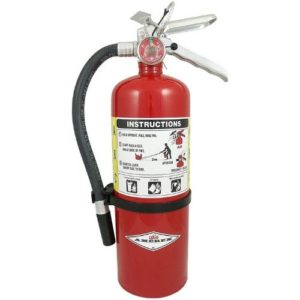 *Amazon.com price as of post date. Offers and availability may vary by location and are subject to change. Read full disclaimer.

An accident is always unexpected. No one plans to have a fire in their kitchen, but if one should occur you’ll be glad you have a fire extinguisher on hand. It’s important that you know how to use it and store it in a location that can be accessed quickly.

Most fires thrive on oxygen, so smothering a fire with a wet rag or pot cover works well. Grease fires require special handling. Use baking soda, salt or a pan cover to put out grease fires. Never use water. Microwave fires can be managed by unplugging the microwave, and oven fires should be tackled with a fire extinguisher or baking soda (if a fire extinguisher isn't available).

Never get in over your head with a fire. Call 911 as soon as the fire breaks out and do your best to control it until the professionals arrive. When in doubt, leave your home immediately.

"My stove caught fire when I turned on the wrong burner—debris in the catch pan burst into flame. Luckily, I had a fire extinguisher handy and nothing was damaged."

5. Be cautious of clothing and accessories

You might not have thought of it, clothing and accessories can present a cooking hazard. Bracelets can get caught on pot handles, long sleeves and long hair can catch on fire, and belt loops can tug pan handles right off the stove top. Be attentive to what you wear while cooking and always turn pot and pan handles in so they aren’t grabbed by a child.

6. Keep kids and pets at bay

Many children enjoy helping their parent whip up a meal, but to avoid injury children must learn to respect the kitchen. Horseplay is out of the question at all times, and when the stove or oven are in use young children should never be left unattended.

Keep in mind that the stove, oven, toaster oven and other appliances don’t cool down immediately after they are turned off—so even when you’re done cooking they present a danger to your child.

Pets lounging on the kitchen floor and toys scattered about are tripping hazards. It’s best to proclaim the kitchen as a “no toy” and “no pet” zone. (Check out our recommended pet gates to control kitchen traffic.)

Kids can help in the kitchen

Cooking with children can be a wonderful way to bond, teach valuable life skills, and have fun. If you want to involve your kids with meal prep, check out our safety guide for kids in the kitchen to learn how to safely involve them.

7. Know that steam is surprisingly dangerous

Scald burns represent 35% of the nearly 486,000 burn injuries seen at emergency hospitals around the US each year.3

Boiling water, hot water on-demand faucets, and even hot beverages present potential scalding risks, and surprisingly so does steam. Steam isn't usually thought of as a danger, but a steam burn is quite serious and is often more severe than a burn from boiling water.

Lifting the lid off a boiling pot of water, pulling plastic wrap off an item that’s just been cooked in the microwave and tearing open “steamable” packets are just a few ways steam presents a danger in the kitchen. Be as careful with steam as you are with boiling water and make your children aware of its potential hazard. 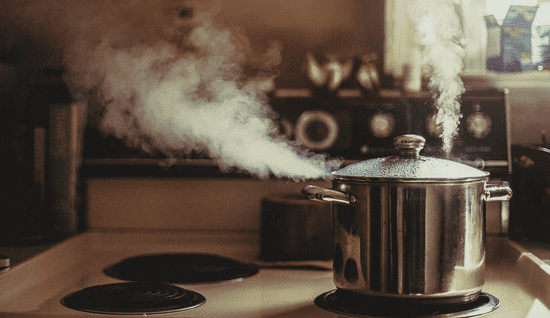 Did you know that more bacteria thrive in the kitchen than in any other room in your house?4 To banish bacteria, clean your kitchen with a water/bleach solution as often as possible. Mix one gallon of water to one gallon of bleach, or use a pre-mixed spray sanitizer created especially for kitchens. Clean cutting boards with the solution after every use.

Sponges and dishrags are notorious for housing bacteria. To kill the bacteria on a sponge, wet it and zap it in the microwave for two minutes. Let the sponge cool for several minutes before you remove it. Change dishrags daily, and wash them in hot water.

We hope you’ll keep our tips in mind to make your kitchen a safe place where only positive family memories are made.

Written by
Alexia Chianis
Wanderlust junky and mom of two, Alexia is a former police officer and U.S. Army Captain who draws on her experiences to write about a myriad of safety topics.
Read More