By Katherine Torres
Contributing Writer
Share Article
SafeWise is an independent review site. We may earn money when you click links on our site. Learn more.

In major cities across the country, biking has become more popular during the pandemic, which means that bike thefts have been on the rise as well.

Love pedaling around on your mountain bike, road bike, or beach cruiser? Thieves do too. Every year, nearly 2 million bikes are stolen in the U.S. Whether you’re eager to learn bike theft prevention tips or have found yourself in this predicament, you’ll find information about it all here.

How to prevent bike theft

529 Garage is an organization that helps combat bike theft. According to their reports, only one in five bikes are ever reported as stolen, and only one percent of bike owners ever register their bikes. When you register your bike, you increase your likelihood that you can get it back if it gets stolen, plus the serial number can help deter thieves from stealing it in the first place.

When you register your bike it will be entered in its database that’s accessible to over 400 law enforcement agencies, universities, bike clubs and bike shops around the world. You’ll get a serial number, a corresponding tamper-resistant shield sticker for your bike, and a certificate proving your ownership and registration. You can take pictures of your bike's serial number and other unique characteristics through the app. It's $10 for an individual bike registration kit and $25 for a four-bike kit. Overall, it's a great investment.

If you’re in college, be on high alert

Bike theft is the number one property crime on U.S. college campuses. Every year, nearly $350 million is lost to bike theft. College kids are already on tight budgets, so being robbed of your transportation can really hurt.If you’re in college, pay special attention to where and how you lock up your bike. Avoid poorly lit areas. Don’t let your bike sit for too many days without checking on it. Never leave it outside unlocked. Tips like this can help keep your bike in your hands. 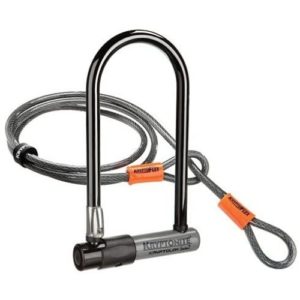 A U-lock with an enforced cable is the highest standard in bike lock protection. The shape of the “U” doesn’t allow thieves to pry it open and the strong steel material makes it close to impossible for thieves to cut. Advancing technology promises some amazing innovations to deter bike theft. Currently, there’s a solar-powered model being developed that will communicate with your smartphone if someone is tampering with your bike. For now, you can buy secure U-locks that operate with a key or code for anywhere from $25-$75.

Don’t forget about your tires and bike seat

Bike theft doesn’t necessarily mean someone will take the whole thing. Some thieves take the bike seats and tires and leave the frame behind. That’s because people normally lock up their frame and forget to include the wheels and seat. Every bike is susceptible, but if you have a quick-release seat or tires, your bike’s tires and saddle are at greater risk of being stolen. To keep this from happening, you should always run your bike lock’s cording through the spokes of your tires. If your bike is completely locked to a secure object, a thief won’t be able to take its parts. 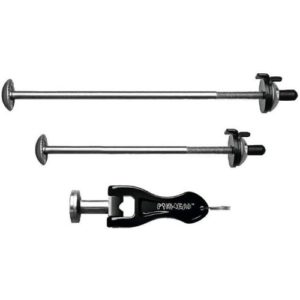 There are products on the market specifically for saddle and wheel protection. Locking wheel skewers replace your quick-release mechanisms and operate with a key—making it hard for thieves to steal your wheels. Bike seat locks are also available to secure your saddle to the bike’s frame.

If security devices aren’t in your budget, you can take your bike’s wheels and seat with you. It’s a pain, but this will keep them out of thieves’ hands and in a secure place.

Lock your bike to something secure and in a safe location

You might be asking for trouble if you lock your bike to a drainpipe in a dark alley. Lock yours to a bonafide bike stand if you can. If that’s not available, choose a heavy, sturdy object that can’t be tampered with. For example, a street sign might seem secure, but a thief could lift your bike over the top and steal it. Think 3D when you’re locking your bike up to ensure it can’t be stolen. Think about where and how you store your bike at home too and consider getting a home security camera to keep an eye on it and deter would-be thieves.

What to do if your bike is stolen

We hope this doesn’t happen to you, but don’t give up hope! There are still many ways you can work on recovering your stolen bike, including:

If your bike is stolen, you’ll need to file a police report. Call the non-emergency number of your local police department and tell them what happened. They’ll more than likely send an officer out to take down the details. Then, you can check in to see if they’ve made progress and they’ll be on the look-out for your bike.

Even if you didn’t register your bike before it was stolen, you can do so after. For $0.99, the National Bike Registry will add your bike to its database for six months. This is great because if a cop finds your bike, they can search the list and return it to you.

It might not do you any good, but it can’t hurt to try. Some bike thieves will take stolen bikes to pawn shops for quick cash. You can call around and give your description of the bike. If an owner sees someone come into the shop with a similar bike, they can take down that person’s information and let you and the police know about it.

Not every criminal is a mastermind. A lot of people steal things and post it to local classified ads for resale. You can do your own investigating by trolling these websites to see if anything turns up. If you do spot your bike, don’t try to retrieve it. Alert the police so they can handle it and keep you safe.

While you’re pedaling around on your prized possession, remember these ways you can keep it safe—and what to do if you run into trouble. In the meantime, you can read up on other safety articles to keep other aspects of your life secure too.

Amazon.com list price as of 10/22/20 10:38 p.m. MST. Product prices and availability are accurate as of the date/time indicated and are subject to change. Any price and availability information displayed on Amazon at the time of purchase will apply to the purchase of this product. Safewise.com utilizes paid Amazon links.