We've researched dozens of dash cams to bring you our six favorites. 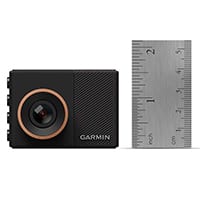 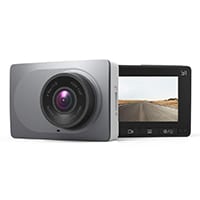 When you start shopping for a dash cam, don’t be afraid to take it slow. Dash cams have so many features in common that it can be hard to parse out what makes each one unique.

To give you a head start, we’ve researched a number of cameras and chosen six to recommend.

KDLINKS X1 tops our list thanks to features like automatic video recording, a wide field of view, and high-definition video that lets you read a license plate up to 50 feet away.

Here's a Rundown of the 6 Best Car Dash Cams 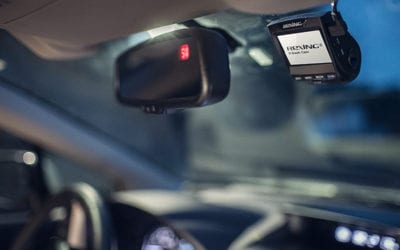 The KDLINKS X1 has all the standard features of a dash cam, with HD video, 1080p resolution, and a 2.7-inch screen. It starts recording when you turn on your car, and the footage loops, erasing older footage. It has a wide angle lens that delivers a 165-degree field of view.

The X1’s built-in accelerometer will lock down your video recording if it detects a crash, but its sensitivity means that hitting a pothole may also trigger the lockdown response.

We also wish you didn’t have to manually set the time, because an automatic time stamp seems like a feature that should come standard with a GPS-enabled device.

The KDLINKS X1 checks a lot of boxes for a great dash camera: it has high-quality video recording that can let you read license plates 50 feet away, superior night vision, comprehensive computer software, and a small, discreet design. There are a few features that you might need to tweak to get it working to your satisfaction, but overall it’s a good buy.

The Garmin Dash Cam 55 comes with all the standard features of a GPS-enabled dash cam, but it’s smaller than most at only 1.5 x 2.2 inches. It has 1440p video capture with a 122-degree field of view, with looped recording and collision detection for automatic recording.

The Garmin 55’s field of vision is narrower than other dash cams, so you might not get a good view of what’s happening on either side of your car. The traffic safety warnings can get annoying, especially in stop-and-go traffic, but you can turn them off if they bother you.

This model has had some issues with overheating, and it doesn’t do well in extreme temperatures.

When it comes to dash cams, you want something that’s simple to use while you’re driving and makes it easy to share video when you need to, and the Garmin Dash Cam 55 does both very well. It’s pricier than other models, but its built-in Wi-Fi, hands-free controls, and fun Travelapse feature justify the higher price tag.

The YI Smart Dash Camera records at 1080p and has a nice, wide 165-degree-angle lens. It’s a little bigger than other dash cams at 3 x 2 inches, but it has all the standard features of a good dash cam, minus a built-in GPS.

Despite the 1080p resolution, the YI image quality isn’t always great, but you can improve it by rotating the lens and manually refocusing it.

The driver lane assistance is often unreliable and will alert you even if you’re driving straight between the lines, so you may want to turn it off.

The YI Smart dash cam gives you everything you need in a good dash cam, but you won’t get a GPS at this price point. It’s good for getting a basic record of collision events, and we like the wireless video download feature, which is something usually seen only in higher-end dash cam models. If you’d like to have a basic, inexpensive device just in case you’re in a wreck, the YI is a solid choice. 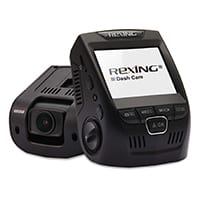 The Rexing V1 has all the standard features you expect from a dash cam, with a 2.4-inch screen and a nice, wide 170-degree field of view. It delivers respectable video quality, recording at 1080p, and 30 FPS. It loops the recording, and it has a G-sensor that will lock the video if it detects a crash—but it doesn’t have GPS.

A newer version of this camera was released that includes built-in GPS. The Rexing V3 Dual Camera starts around $200, and is available on Amazon now.

This model doesn’t come with GPS, but it does have a GPS hookup if you want to add one. Because of the design, you have to carefully mount the camera so your horizon line is correct.

It comes with adhesive tape instead of a suction mount, which doesn’t hold up well over time or with extreme temperatures. Plus, the night vision isn’t as clear as we’d like.

At just under $100, the Rexing V1 is a solid choice if you’re on a budget, but we recommend investing the extra money to get it hooked up to a GPS. It doesn’t have a lot of fancy features, but its drawbacks are minimal, and its strong customer service should take care of any issues that come up. 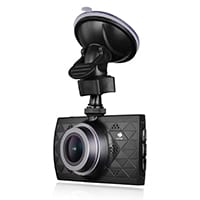 The Z-EDGE Z3 has all the standard dash cam features but no GPS. It records in Ultra HD 2.5K video, with a 3-inch screen and 155-degree viewing angle. It has HDR night vision, crash detection, and motion detection for when the vehicle is parked.

At this price point ($125), we expect to see an integrated GPS in this dash cam, but the Z3 doesn’t include one. The camera also doesn’t have a touch screen, so you’ll have to spend some time fiddling with the buttons and the onscreen menu.

And the included USB cord is only for power—you’ll have to purchase a different cord to download videos from the camera to your computer.

The Z-EDGE Z3 gets high marks for picture quality, and we really like the motion- and vibration-sensing feature in Parking Mode. These qualities justify its spot in this price range for dash cams, but we recommend getting an add-on GPS unit to give you total coverage in case of an accident. 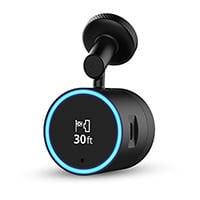 The Garmin Speak Plus is like a tiny Amazon Alexa for your car with all the standard features of an included dash cam. It has an 82-degree field of view, records at 1080p resolution, and has GPS technology.

The Garmin Speak Plus has just an 82-degree field of view, which is half the coverage of less expensive dash cams.

You have to use your own phone’s data plan if you want to enjoy the Alexa features in the car, and you have to keep the Speak Plus app running in the background on your phone as you drive.

If you’re already an avid Alexa user and you want to enjoy the convenience of a digital assistant in the car, the Garmin Speak Plus is a good dash cam for you. The camera itself isn’t the best quality, but its useful Alexa features and the integrated navigational system earned it a spot on our list.

A dash cam can protect your finances, your time, and your personal property in a number of ways.

A dash cam can even help you save good memories or increase your YouTube hits. But whatever side benefits you get from a dash cam, the core benefit is that it provides a rock‐solid, nearly indisputable alibi.

You have to buy one first, of course. But if it saves you from even one wrongful citation, a dash cam could essentially pay for itself.

How a Dash Cam Works

These days it may feel odd, outdated, or even extravagant to buy a camera with a single function. Next to a smartphone, a camera can seem so inefficient.

But dash cams are sophisticated devices doing a job that other cameras, even professional photographers’ cameras, just can’t do. They’re designed to meet the needs that arise while driving a car—to keep your field of vision clear, to protect yourself from loose items, to be able to monitor the road instead of the camera, and so on.

The features below make a dash cam what it is. You’ll find them on most, if not all, dashboard cameras on the market today. Whether you’re looking for the best dash cam for car, truck, or van use, these are the features to watch for.

Dash cams are designed to turn on and off with your car—but only if you leave the camera plugged into the cigarette lighter outlet between drives. If you disconnect the camera between drives, just plug it in to power up.

For most dash cams, the number of frames captured per second (fps) is 30, but some cameras take 60fps to better capture fast action.

Many dash cams start recording the moment they turn on, while others activate the record function by sensing when the car is in motion.

Many dash cams come with a built‐in microphone to capture both audio and video footage.

Most dash cams have some ability to manipulate light within an image while recording so that night shots, high-contrast imagery, and low‐light footage are clearer when you play back the recording.

Most dash cams have an LCD screen and the ability to play back video on the spot. Instant playback is one of the most valuable features of a dash cam: it can exonerate you on the spot instead of in the courtroom.

Most dash cams attach to your windshield with a suction cup.

To keep you from having to manually erase hours of non‐collision footage, dash cams are designed to record over existing footage (starting with the oldest) when the memory is full.

In the even of a crash, many dash cams will lock down the automatic recording. This means it will catch the entire event and save it. A lockdown recording won’t be looped over, so you don’t have to worry about downloading it in the aftermath of a scary situation.

Most dash cams take micro SD cards with up to 32GB capacity (about five hours of HD footage). And pay attention to the details—some dash cams come with SD cards included, but others require you to buy one separately. Some dash cams are fussy about the class of the card, so read the reviews to see which SD cards worked for other customers.

Most dash cams have a sensor that detects sharp turns, rapid braking, and other signs of collision. When you trigger the sensor, the camera saves that footage automatically or with the touch of a button. This type of footage is typically protected from automatic looping, so you won’t accidentally lose crucial video footage.

Download high-definition video footage anytime using an SD adapter or USB cable. Some dash cams come with companion software, but not many‐it’s usually your job to find a compatible media player for your camera’s file type.

Almost all dash cams record in HD (1080 x 720 pixels or more) to help you see license plates and other details clearly.

Amazon.com list price as of 11/1/19 2:30 p.m. MST. Product prices and availability are accurate as of the date/time indicated and are subject to change. Any price and availability information displayed on Amazon at the time of purchase will apply to the purchase of this product. Safewise.com utilizes paid Amazon links. 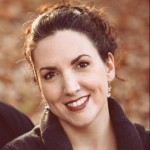