Parental control apps help children use their first smartphone safely and responsibly. The affordable Boomerang app is especially good for setting screen-time limits and blocking specific websites. But during testing, we noticed it doesn’t give parents real-time push notifications about their child’s activity, which seems like a major oversight.

Boomerang costs about $16 per year for one child’s device. Or you can monitor up to 10 children’s devices for about $31 per year. Licenses can be purchased through the parent app or web dashboard. There are no refunds.

You don’t have to input any payment information to take advantage of Boomerang’s 14-day trial.

Is Boomerang right for you?

Boomerang isn’t an all-inclusive parental control app. It works best if this is true for you:

Although some features differ on iOS vs. Android devices, here are the main things you can do with the Boomerang parental control app:

You can see the following history logs and alerts from the parent app or online dashboard:

This data helps you figure out if your child uses their phone in a healthy way.

We especially like that you can see full web browsing history, even if their attempt to access a website was thwarted by the content filter. You’ll know what kind of topics your child is curious about and have well-timed discussions.

What’s missing from the Boomerang app

The Boomerang app doesn’t offer these controls or features:

We recommend Boomerang for younger kids because they’re less likely to use social media or have their own email account.

You won’t get the following on the parent account:

This was a major point of frustration during testing. Maybe it makes sense for busy parents to log into the app to review their child’s activity once per day, but we wish more notification options existed for parents who want real-time updates.

Setting up Boomerang is pretty straightforward:

Here's what happened during testing

We tested the Boomerang app with two iPhones. Here’s what happened.

1. Set up was relatively easy, but there’s no tutorial

I created the account in parent mode, and my coworker Rebecca set up her device in child mode. We had no hiccups during setup and felt the on-screen prompts were easy to follow.

After that, I felt stranded. There was no tutorial to walk me through the different functions of the app. I had a nagging feeling that I was missing something, especially in terms of push notifications or text alerts. 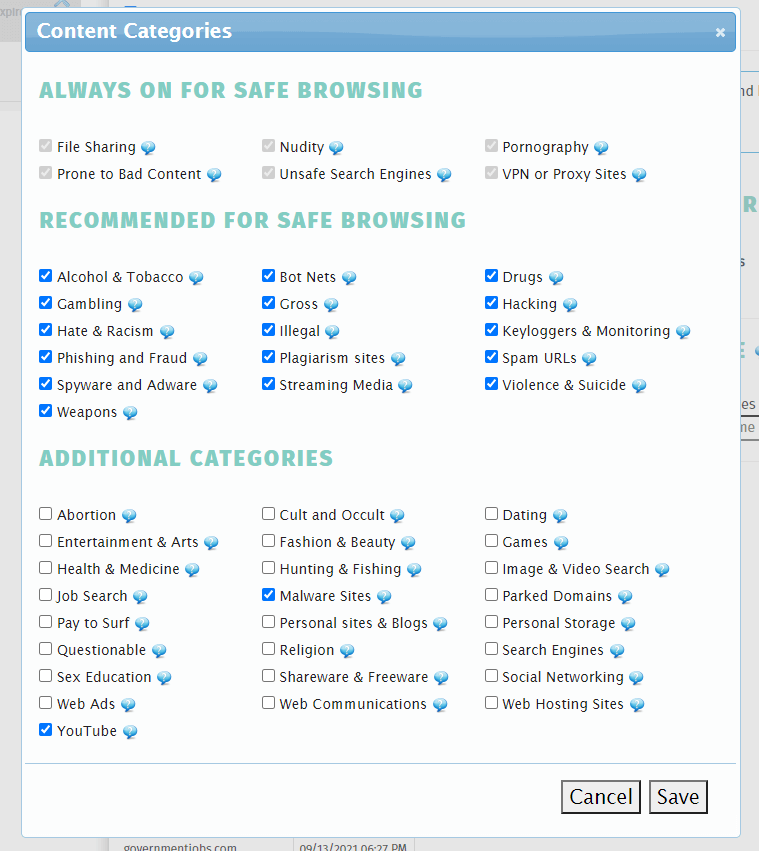 I was surprised to see the number of content filters available. You can be as conservative or liberal as you want with over 40 topics on the chopping block.

Check out the screenshot below to see what the Boomerang app blocks by default.

For our test, I blocked the following topics:

I blocked all access to Cheerios.com. Then I went to the Dictionary tab and added “centrifugal” to the list of inappropriate words.

As you’ll see from the screenshot below, Rebecca was still able to do quite a bit of research into hunting & fishing, beauty & fashion, religion, and centrifugal force. 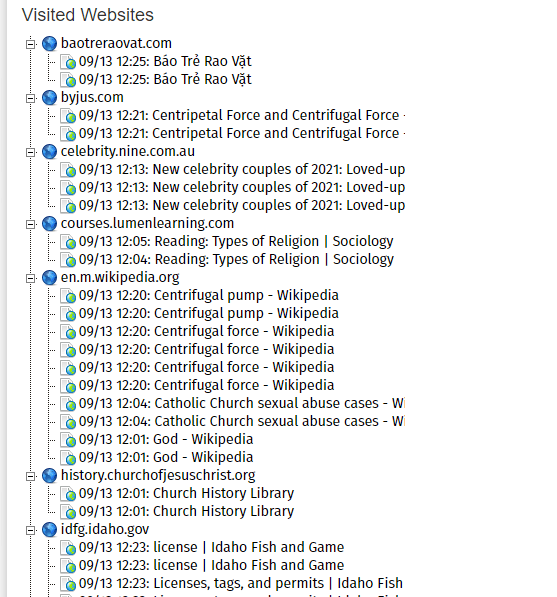 Even though some sites got through, plenty of others were blocked, including Cheerios.com: 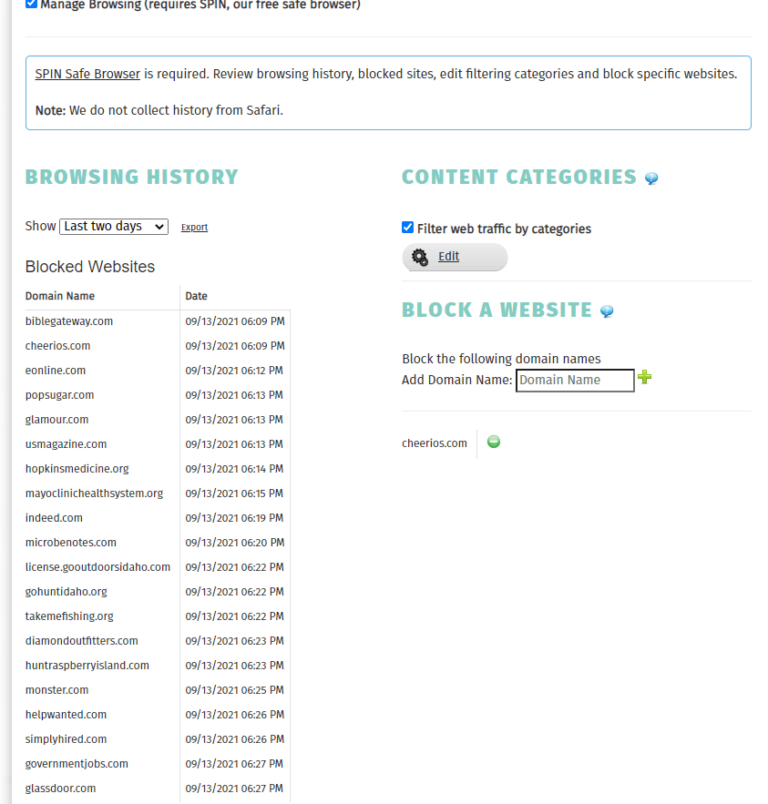 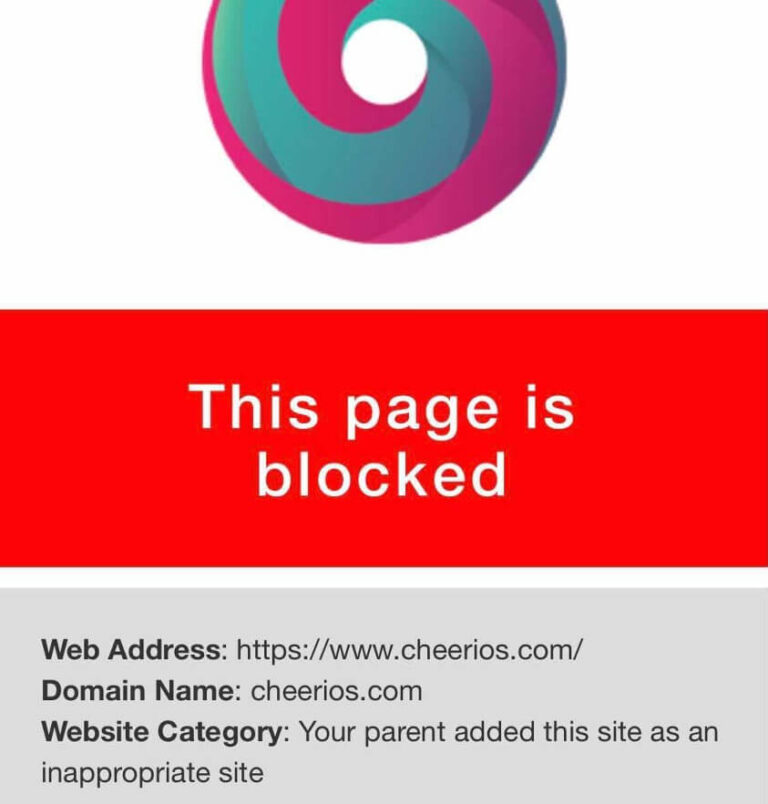 Remember, blocked sites and content filters only work if your child uses the SPIN browser. Rebecca could look up anything on Safari.

As for that blocked word “centrifugal,” apparently the dictionary feature alerts you to inappropriate words used in text messages, not in the search bar. This wasn’t clearly explained in the app, and I can imagine other parents would make the mistake of thinking they’ve set up internet alerts instead.

I knew Rebecca was putting the Boomerang filter through the wringer—she kept instant messaging me screenshots as proof. But my phone was completely silent. I would have loved a push notification or text alert telling me my “kid” was up to something so I could have a conversation with them right away.

I did see an option for email alerts, but these are sent just once a day. Otherwise, it was my responsibility to get on the app or online dashboard to see what was happening.

4. Some features worked, others didn’t 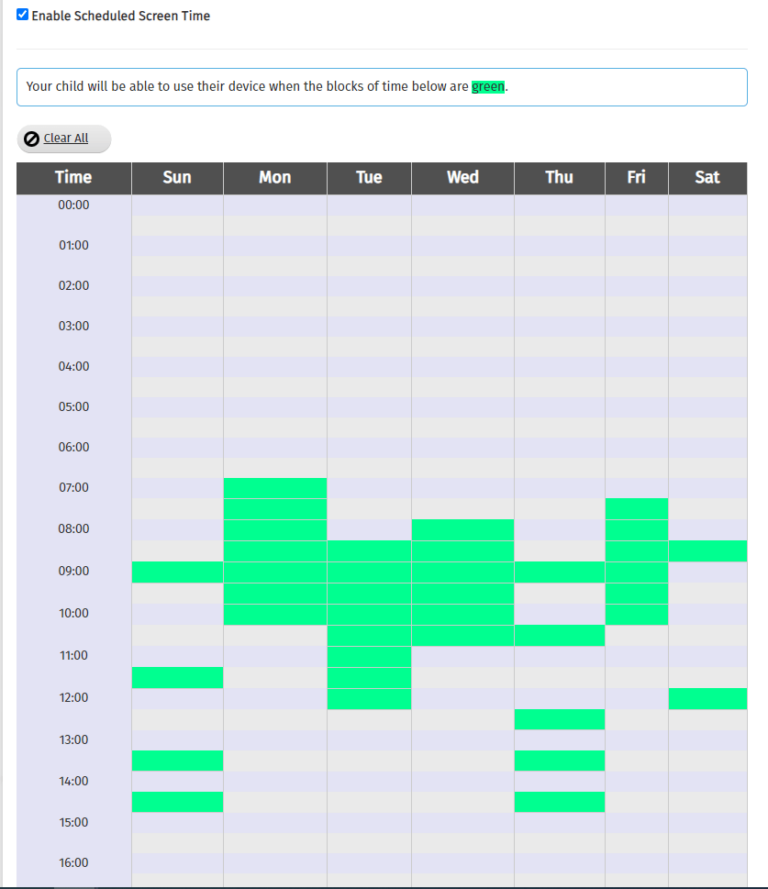 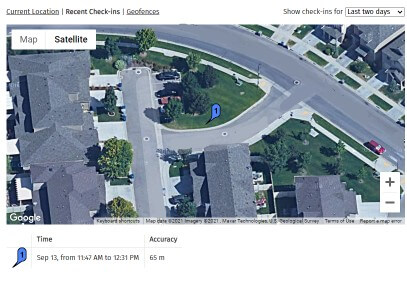 5. Tester deleted app without any trouble

Because Rebecca used an iPhone, she could delete the app without inputting a password. I expected to get some sort of alert about this, but nothing happened. My “kid” could have deleted this app and searched for any mature topic before I’d have a clue what was going on.

I couldn’t refresh Rebecca’s location after she deleted the app. This was the only sign that something was amiss.

Boomerang works with mobile devices running on at least Android 5 or iOS 12.

As with all parental control apps, Boomerang offers limited functionality if your child uses an iPhone or iPad. Our main gripe is that Boomerang’s parental dashboard doesn’t always make it clear that some of the features won’t work with your kid’s device.

For example, we tried to disable our iPhone tester’s camera. Nothing happened. It’s hard to say whether that was an iOS issue or a Boomerang issue.

If your child has an Android phone, their location updates automatically in the app. If your child uses an iOS device, they’ll receive a push notification when you request a check-in. They can ignore it.

Uninstall protection doesn’t exist on an iOS device. Your child can delete the Boomerang app or SPIN browser whenever they feel like it. We didn’t even get a notification when our tester deleted Boomerang from her iPhone. That’s super frustrating and means you don’t get a chance to enact a swift intervention.

With an Android device, you can monitor YouTube search history and create YouTube-specific content filters. On an iOS device, you’re limited to just blocking YouTube altogether.

Boomerang lets you fine-tune your child’s screen time through the “Always On” feature on Android devices. For example, you can allow your child to access educational apps, visit specific websites, or call certain people outside the normal screen time schedule.

There’s no way to do this on an iOS device. The most you can do on an iPhone is see which apps your child has installed after downloading the Boomerang app.

You can see which apps your child uses the most if they have an Android phone, but this function disappears on iOS devices.

You’re in luck if your child uses a Samsung Knox device. Boomerang lets you disable tons of features that could be used to get around the parental controls, including the following:

Boomerang’s best feature is the website blocker. It worked like a charm. We also really liked how easy it was to set screen-time limits.

There’s room for improvement in terms of content filters and parent notifications, so we recommend routinely checking your child’s web browsing history and blocking any specific websites that concern you. Don’t forget to tell your child what you’re doing and why.

What age is Boomerang for?

Because it doesn’t monitor social media, we consider Boomerang “best for younger kids,” especially under the age of 13. By the time your child is old enough to join social media, you might want to switch over to Bark.

To learn more about choosing a parental control app, head over to our Guide to Parental Controls.

Both apps can be installed on one device without overriding each other.

Removing Boomerang from an iPhone is the same as removing any other iOS app.

You need a password to delete Boomerang from an Android device.

We recommend downloading the Boomerang app through the links provided on their website. Extra features are available for Android users through a download exclusively available on the Boomerang website, not on Google Play.

Boomerang is a parental control app designed to keep kids and teens safe online with content filters, a website blocker, and text message monitoring. Parents can also enact screen-time limits and see their child’s location through the Boomerang app.

How we reviewed Boomerang