Bark is a longtime favorite of ours for social media monitoring. On top of our research, we've had multiple kiddos, teens, and parents give it a try. Find out why Bark is our top recommendation for keeping kids safe on social media.

Bark impressed us during testing with its monitoring alerts for 24 social media platforms. We also appreciated the adjustable sensitivity settings and how Bark encourages you to have conversations with your kids about online safety.

Bark is going to cost a little more than other parental control apps, but it also does a lot more than its competitors. We think it’s worth the extra money.

That said, we recommend taking Bark up on its seven-day free trial offer before you opt into a monthly or yearly plan. When you log into your account, you’ll see a countdown of days left in your trial. You can cancel anytime before the trial ends to avoid automatic billing.

After the trial period, if you’re certain Bark is the faithful online companion your family has been waiting for, go for the yearly subscription to save money in the long run. 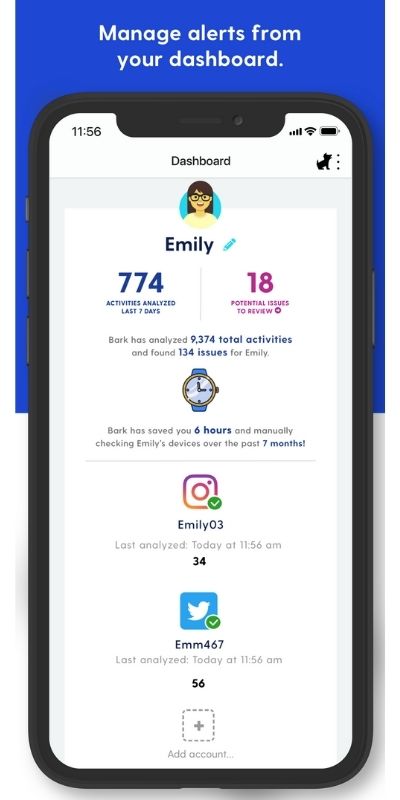 Bark’s founders and board members, who are parents and psychologists, designed this parental control app to encourage open conversations.¹

Unlike some other online filters that rely exclusively on keywords, Bark uses advanced machine learning algorithms and artificial intelligence to screen social media, texts, and emails.

Parents receive alerts via email or text when Bark detects suspicious activity. Here are the concerns Bark screens for:

In testing, we were particularly impressed with how well Bark handles Google’s suite of products. Many middle schoolers and high schoolers now use Google accounts to connect with friends and share content. Often, they’ll use comments in Google Docs instead of chatting on social media.²

While parents seem to be aware of the dangers of Facebook and YouTube, they may overlook Google Docs as a potential source of cyberbullying. Thankfully, Bark does an exceptional job of monitoring Google accounts and sending snippets of concerning conversations and social interactions in its alerts.

In our testing, Bark was surprisingly adept at catching slang, acronyms for swearing, and even questionable emoji use. At one point, an emoji-heavy text from an 8-year-old triggered a warning for alcohol-related content because it included a beer mug.

While it’s nice to know that Bark won’t miss anything, all those alerts can get pesky. Bark makes it easy to adjust the settings for each type of concern so you can customize based on your child’s age and how much information you want.

There are three options: relaxed, moderate, and strict.

The “relaxed” setting will alert parents only for the most serious concerns, while “strict” is liable to turn up some false positives. For instance, on the strict setting, Bark flagged an email between a father and son about a haircut appointment as a self-harm risk.

There are a few types of alerts, like those for inappropriate behavior or risky app and site usage, that you can set as either on or off. But the majority of alert settings are customizable from relaxed to strict.

One of the challenges of parental control apps is that they can be tricky to install, especially if you’re not particularly tech-savvy. But Bark does an exceptional job of walking parents through each step of the installation process.

For devices like Chromebooks and PCs, it takes just 20–30 minutes to connect one child’s social media accounts and email accounts to Bark. Multiply this by how many kids you want using the app.

Installation gets wonky with iOS devices, though. This complexity isn’t Bark’s fault, as Apple doesn’t always play nice with other platforms and apps. You’ll need to connect your iPhone or other iOS devices directly to your laptop or computer and use Bark’s desktop app to finish the installation process. During testing, the download slowed to a crawl and took 30–45 minutes to complete. 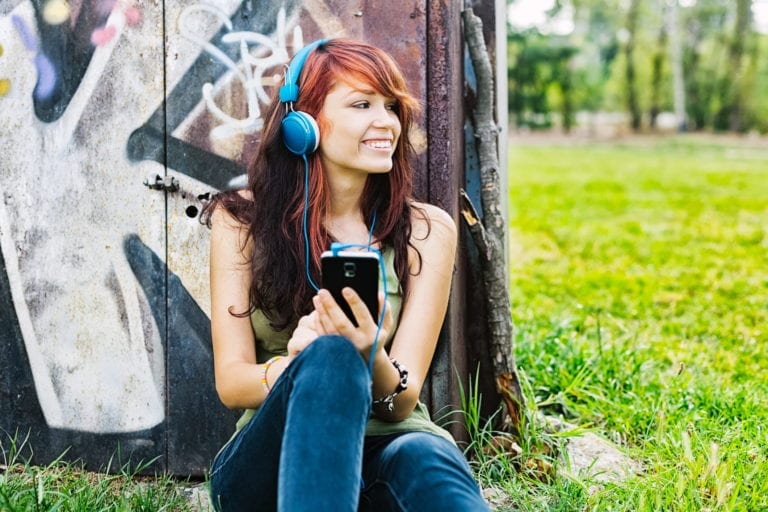 Bark recently updated its offerings to include web filtering and screen time limits, in addition to its check-in feature. Once connected, you can ask your child to check in, and Bark will notify them and request a response.

A check-in doesn’t give you location information like kids’ GPS trackers do, but it can help relieve some concern when your child is away from home.

Bark’s check-in feature is pretty basic, so if you want to communicate directly with your child on their mobile device, look into the best phones for kids instead.

You could install a parental control app on your child’s device without letting them know, but Bark discourages this. During the installation process, Bark reminds you to have a frank conversation with your kids about why you’re using Bark and what they can expect.

Experts agree that one of the best ways you can ensure your kids’ safety on the internet is to encourage communication.³ By limiting strict control features and expanding monitoring instead, Bark puts those critical conversations about staying safe online in a parent’s hands.

Bark’s parental alerts do include content and comments from people your child interacts with, but the notifications are only snippets of conversations. These alerts strike a balance between respecting the privacy of others and safeguarding your child.

Bark vs. Net Nanny vs. Qustodio

Other parental control apps offer the ability to block sites and apps or filter content, but Bark is unparalleled when it comes to social media monitoring.

Because a Bark account includes monitoring for an unlimited number of children and devices, it’s also a great value for big families with lots of gadgets.

Yes. Bark also has an app for Android devices and a desktop app—but because you’ll also receive push notifications via text and email, the app is somewhat redundant.

Many schools use Google’s free products for email, chat, and document management, but kids also use those same tools for social reasons. If you want to monitor their school accounts, you’re in luck—Bark offers this service for free.

Connect with your child’s school, let them know about Bark Schools, and see if they’re interested in joining. Nearly 1,300 school districts (and counting) use Bark to monitor students’ online activity.

If you’re worried about something you saw in an alert, you may be wondering how best to address it with your child.

At the bottom of every alert, Bark offers common-sense recommendations about how to discuss the problem with your child as well as discount codes for online counseling services for teens.

Because of this proactive approach, Bark credits its app with averting 51 potential acts of school violence and alerting parents to 99 sexual or online predators in 2018.

Installing any parental control app, including Bark, on your computer or your child’s device may slow it down slightly. When we tested our internet speed before and after installation, the difference was minimal.

Neither the children nor the parents in our test noticed a slowdown during normal online activities like web browsing or email, but it may become more pronounced for high-bandwidth activities like gaming.

Conclusion: Bark is a parent’s best friend when it comes to internet safety

Open and honest communication with everyone in your family about internet safety for kids is critical. While blocking access and restricting social media may be necessary for young children, it’s not a long-term solution for teaching your child how to stay safe online.

Bark is ideal for monitoring tweens and teens as they venture into social media because it doesn’t infringe too much on their privacy. Easy installation, good customer service ratings, and unlimited access for your entire family and all their devices make Bark’s slightly higher price tag well worth it.

How we reviewed Bark

To test how Bark works, we connected multiple devices used by both young children and teenagers to a Bark account. We experimented with sensitivity filters and monitored alerts over a week’s worth of online activity for both age groups across platforms like YouTube, Facebook, Google Docs, text messages, and email. We also considered information from cybersecurity experts on keeping kids safe as well as reviews from other Bark users.4 For our full methodology, you can pop over here and read to your heart’s content.

Written by
Kaz Weida
Kaz is a journalist who covers home security, parenting, and community and child safety. Her work and product testing in the security and safety field spans the past four years. You can find Kaz in HuffPost, SheKnows, Lifehack, and much more. Her degree in education and her background as a teacher and a parent make her uniquely suited to offer practical advice on creating safe environments for your family.
Read More
No Comments