We compared four Eufy doorbells to find the best choice for most folks.
Best overall 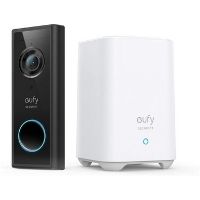 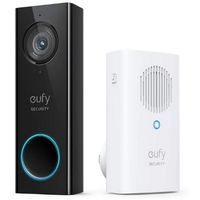 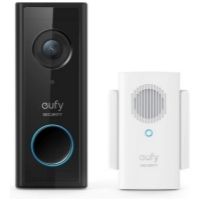 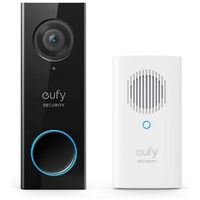 Eufy stands out among video doorbell brands for one thing: local storage. It skips monthly cloud storage fees and helps protect your privacy by keeping your video off the internet when you're not watching it.

While local storage is the standout feature, Eufy's 2K resolution generally yields sharper videos than competitors with 1080p. The Eufy Video Doorbell 2K (Battery-Powered), our favorite Eufy doorbell, combines both of these features in a wire-free package with flexible installation options.

It's an expensive doorbell, but the local storage keeps ongoing costs low. Still, Eufy has plenty of doorbell options to fit different needs.

2K video resolution on some models

Most models have fixed storage capacities

Which is the best Eufy doorbell?

What to expect with Eufy doorbells

Eufy's doorbell cameras are so similar that it's hard to find any meaningful differences beyond the video resolution and power source. This makes it harder to pin down which doorbell is the best of the bunch.

Most video doorbells rely on cloud storage, but Eufy breaks the pattern by including local video recording on every model. This is super convenient because you don't need to pay a monthly storage fee, and your camera still works without a Wi-Fi connection. Only recently has Eufy seen any competition for local storage from Lorex and the new Nest Doorbell (Battery).

Still, the amount of storage varies by camera. Both wired models have just 4 GB of space, while the HomeBase hub supports 16 GB. Only one model has expandable storage: the Eufy Video Doorbell 1080p (Battery-Powered). It supports microSD cards up to 128 GB, which is more than enough space to record your front yard for over a year (according to Eufy).

Your Eufy doorbell isn't much different than an old-school doorbell without the Eufy Security app on iOS and Android. You can use it to set up your doorbell, change settings, share access with other family members, and, most importantly, view recordings and live video.

When someone presses the Eufy doorbell's button, a notification pops up on your smartphone so you can see who's visiting and talk to them with two-way audio. We like the app's simple user interface, which groups the most valuable features into three tabs: devices, events, and security.

The Devices tab gives you a quick way to watch live feeds from your doorbell. It's also where you'll go to change settings for your devices. One of our favorite features is the activity zone setting to tell the camera where to watch for motion. If you want, you can ignore everything but the person walking up your path.

The Events tab shows a complete history of everything your camera records. Come here if you want to download videos for sharing or to save permanently. (Eufy doorbells will automatically delete older videos once their storage fills up—it's better to download clips you want to save rather than leave them on the camera.)

The Security tab helps you program how your smart doorbell acts when you arm and disarm different modes. (This is especially useful if you have a Eufy security system.) You can even schedule modes to run at certain times. We like this for telling your camera to mute notifications during the middle of the night while still recording video when someone triggers the motion detection.

You can record up to three short messages to play for people at the door when you're busy. While many other doorbell cameras also offer pre-recorded quick responses, Eufy's unique because you create your own. This adds a personal touch to your messages so you can tell a delivery driver to leave your green curry on the porch without sounding too robotic.

Unlike some other Eufy security cameras, its doorbells aren't compatible with Apple HomeKit. We hope it happens eventually since Apple's smart home platform is a seamless experience.

Eufy puts a strong emphasis on customer privacy. Its policies forbid selling your data to third parties, and it provides tools like encryption, local storage, local AI smart detection, and two-factor authentication to protect your information from ne'er do wells.

Eufy's four doorbells split evenly between 1920p (2K) and 1080p video quality—you can find both resolutions in wired and battery-powered versions. Ultimately, we prefer the 2K doorbell cameras, which capture more detail (especially if you use digital zoom to blow up your videos).

Interestingly enough, the 1080p cameras record video in a 1200p resolution. This leads to some odd wording in Eufy's marketing materials as they refer to the cameras as "1080p-grade." Either way, the resolution is close enough that most folks can't tell the difference.

Even with the differences in resolution, we think Eufy's video quality looks as great or better than rivals like Ring's suite of video doorbells and Arlo's doorbell camera—especially since neither brand has 2K doorbells.

There are three kinds of power sources for Eufy doorbells:

How long does the Eufy doorbell battery last?

Eufy says its two battery-powered models last 120 and 180 days on a charge, but our experience with battery-powered cameras says to expect to recharge about two to three times as often. Battery life from manufacturers rarely holds up under real-world conditions.

The Eufy Video Doorbell 2K (Battery-Powered) is the most flexible doorbell camera the brand offers.

We love the freedom to install the camera far from wires, but it's even better with doorbell wiring. It's the only Eufy doorbell that works with existing mechanical chimes inside your home. The other wired models use doorbell wiring for power but bypass the existing chime in favor of a plug-in digital chime accessory.

One bonus of having a battery is that it's also compatible with doorbell transformers as low as eight volts—it works with more homes than other Eufy doorbells.

But it's not without drawbacks. It requires a Eufy HomeBase hub to work, which adds a hefty chunk to the price compared to other Eufy doorbells. The hub balances out its cost by supporting many cameras and doorbells at once, which is great if you need extra video surveillance. You can buy an add-on Eufy 2K doorbell for around $125.

If you're fine skipping the installation flexibility of a battery, the Eufy Video Doorbell 2K (Wired) is a great way to keep 2K video quality and save around $40 compared to our top Eufy doorbell cam. Its features are essentially the same, except that you don't need a base station and the doorbell comes with a free indoor chime.

Aside from providing constant power, existing wiring means this wired doorbell has a three-second pre-buffer that constantly saves a tiny amount of video. It attaches this before a motion event for a complete record of activity. This is similar to Ring Video Doorbell 4's pre-roll feature, but it doesn't require a subscription.

There's not much storage space on the doorbell, so you may find yourself sorting through videos more often if you always record in 2K quality.

Up to 128 GB storage
View on Amazon

The Eufy Video Doorbell 1080p (Battery-Powered) has a low price of around $100, which costs about the same as the Ring Video Doorbell (2nd Gen) and is lower than you'll find with Arlo and Nest. Still, you must manually recharge the camera every couple of months, so the lower price isn't enough for some folks.

But the Eufy 1080p battery doorbell has two advantages over its pricier siblings. First, its local storage uses microSD cards, and you can expand it up to 128 GB, which is 32 times the capacity of Eufy's wired doorbells.

It’s also the only Eufy camera doorbell that uses cloud storage. Eufy charges around $3 a month to store 30 days of video for one camera, making it one of the more affordable cloud plans on the market.

The Eufy Video Doorbell 1080p (Wired) has one advantage over other Eufy doorbells: it's the cheapest option for Eufy doorbell wiring. Still, you're giving up 2K video quality for a lower price. Otherwise, it has the same features as the Eufy 2K wired doorbell, including the useful three-second pre-buffer and relatively compact size.

Although they're remarkably similar, every model in our Eufy doorbell review has a place it works best. Wired or wireless, they have some of the best video quality among doorbell cameras. Plus, their local video storage has no monthly fees and helps keep your data private. Overall, they're great alternatives to well-known brands like Arlo, Nest, and Ring.

Battery-powered Eufy doorbells don’t require an existing doorbell chime in your home. While the wired models need a chime, they use it for power only and can't activate it like a traditional doorbell button.

We like to think so. In terms of video quality, Eufy easily keeps up with major brands like Arlo, Ring, Nest, Wyze and Blink cameras. The doorbells aren't too expensive, and Eufy provides comprehensive customer support resources online that are easy to search. Plus, its unique approach to local storage and privacy-first features often outshines larger competitors.

How we reviewed Eufy doorbell cameras

We laid most of the groundwork for this review while working on our Eufy cameras review a few months back. We examined every difference between the four models using online reviews, customer support resources, and a custom spreadsheet for cataloging features across dozens of camera brands.

While we couldn’t test Eufy doorbells personally for this review, ​​we have years of experience testing security cameras and video doorbells that help inform our recommendations. Learn more about how we rate, test, and review products in our full testing methodology.