Online Safety for Kids in 2022: Parenting Tips for Tech

By Trevor Wheelwright
Researcher & Writer
Share Article
SafeWise is an independent review site. We may earn money when you click links on our site. Learn more.

To support parents with our Internet Safety Guide for Kids, we surveyed 1,000 parents about the challenges they experience. They gave us their thoughts on parenting, remote learning, and internet safety: 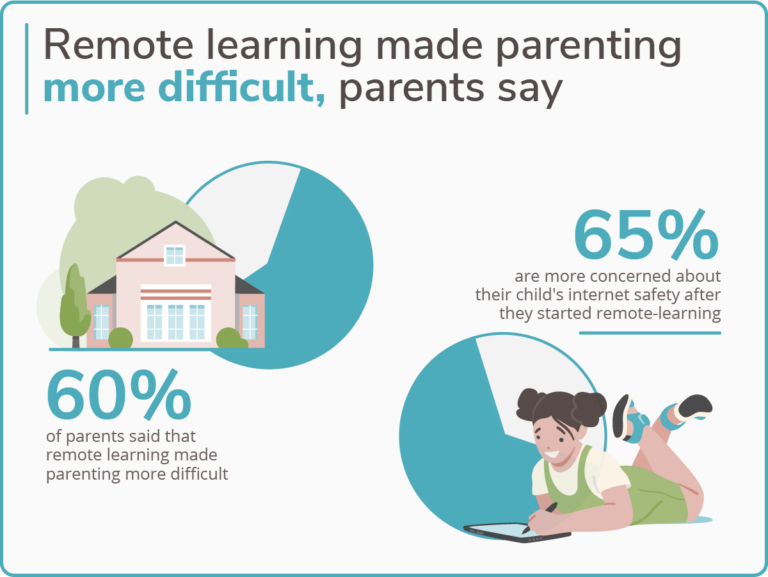 Even with kids going back to school, many kids still spend extra time online. And it can be tough for parents to keep up with the ever-changing tech children use today.

On the bright side, schools are pitching in

Parents aren’t alone in taking steps to protect their children’s safety: 78% of parents told us they think their child’s school has taken appropriate steps to make remote learning safe for their child.

We recommend learning about your child’s school’s online policies and protections, as well as communicating any concerns with teachers and administration staff.

Though schools can prevent some online material from reaching kids, most parents still worry about potential problems linked to more screen time.

Concerns vary by parents, but the most common concerns for children’s online safety were access to inappropriate material, too much screen time in general, or too much time spent on social media. 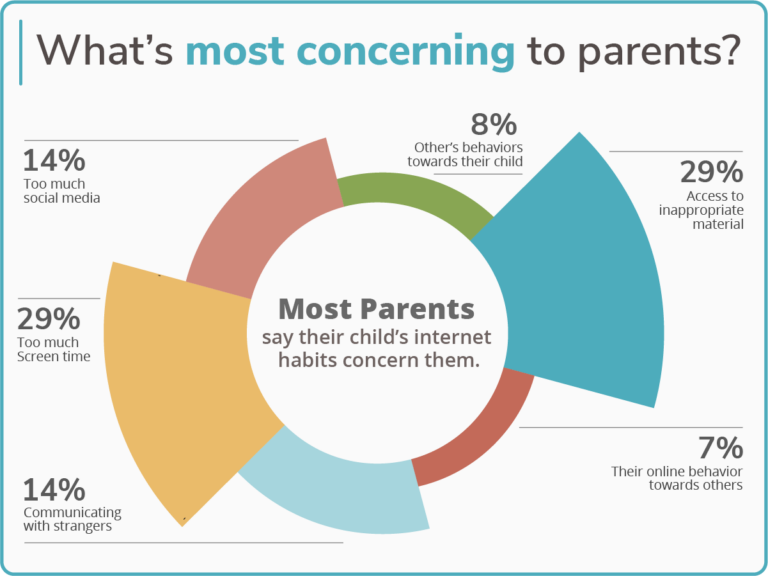 To help your kids avoid issues with internet use, communicate what is acceptable, which apps or sites are off limits, and what to do if they run into anything strange.

The vast majority of parents have rules for online safety

Only 7% of parents told us they had no rules in their household for their child’s web usage.

For the 93% of parents who do have rules, here are the most common:

About half of parents have rules about reporting inappropriate content, chatting with strangers, sharing passwords, and time limits for web usage.

Nearly a third of parents don’t allow social media, and a little over a third of parents require adult supervision to use the internet. But keeping track of those things can get a little complicated with the addition of cell phones (and devices like tablets).

To help make rules clear, parents and kids can sign contracts for online family safety. Whether you use a template or create your own agreement, keeping the contract handy (or, better yet, visible) will help you and your kids remember the commitment.

Most kids have cell phones, but that decision is yours

These days, it’s more common for kids to have cell phones than not: only 16.58% of parents said their child does not have a cell phone—which means most kids have another individual portal for accessing the internet.

There’s a lot of discussion about the appropriate age to give kids a cell phone. We learned from our survey that most kids receive their first cell phones around ages 8–11. And less than 9% of kids receive cell phones after the age of 16.

Here are the most common ages for kids to get their first cell phone:

Cell phones can be a helpful tool for safety. For example, if a kid’s old enough to drive, a cell phone helps with road emergencies and provides another way for parents and kids to check in.

Still, it’s fair for parents to have concerns about cell phones.

Ultimately, it’s your responsibility as a parent to ensure your child is responsible enough to own and use one. (While you’re at it, it may be worth double-checking your own cell phone habits to make sure they’re not mimicking anything you wouldn’t want them to.)

What phone should I get to keep my kid safe online?

If you’ve decided to get your kid their first cell phone, you’ll want to understand the differences between iOS and Android’s child-safety features.

Android allows for more third-party integrations than Apple. For example, with the Boomerang app, features like text message monitoring, geofencing, and uninstallation prevention don’t work when used on iOS.

However, Apple users have a lot of built-in safety features that you can turn on or off according to your family’s needs. And some systems like Family Time work well with iOS.

Regardless of which phone you pick, you can find ways to protect your child’s safety online.

How much is too much when it comes to screen time on cell phones?

There is no clear standard for too much screen time for kids above 5, and remote school adds necessary online time.2 But having time limits and boundaries with content can help your child avoid potential issues associated with excessive screen time.

Should you read your child’s text messages?

More than 77% of parents revealed to us that they read their child’s text or social media messages, with 57% telling us they did so regularly. Are they doing the right thing?

Sneaking isn’t the answer unless you suspect your child may be in danger.3 We recommend setting the expectation that you’ll be monitoring your child’s phone before you start snooping. This way, you can build trust while offering your child responsibility.

Try using phone checks as teaching moments to discuss things like cyberbullying, age-appropriate media, and avoiding contact with strangers. You can also establish household rules—like no texting after a certain hour.

For young minds, the world of social media can be a lot to take in. Kids may develop negative digital habits without proper discussions and boundaries.4 Most parents are concerned about Facebook, Snapchat, Instagram, Twitter, and TikTok. 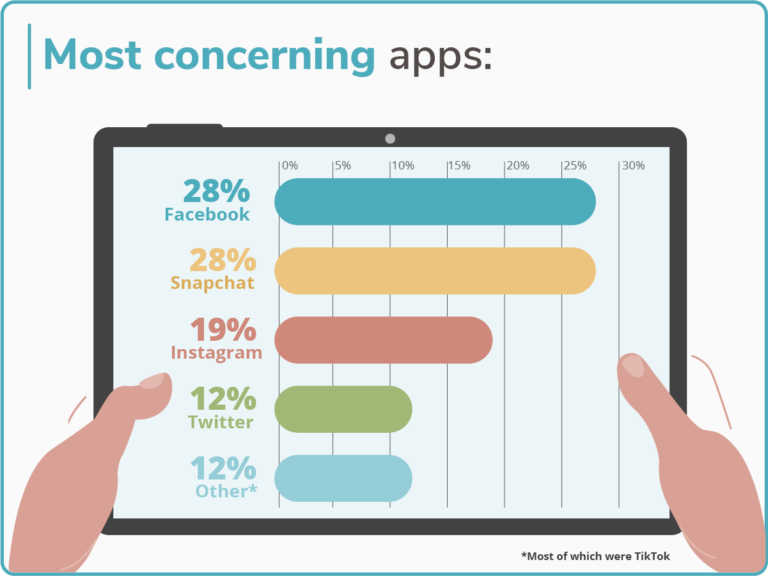 Some apps are more dangerous than others, and they’re not all social media, so part of a parent’s duties is understanding what each app does. One parent said they worried their child spent too much time on Tinder, a dating app that requires users to be 18 years or older.

While you might be familiar with Facebook as a place for family and friends to connect, knowing that Snapchat allows for private temporary messages and stories may make you think twice about keeping it on your kid’s phone.

It may sound wonderful to always be there when your kid needs you, or to stop something bad from happening, but it’s also an impossibility. Instead, you can use parental control apps to help limit what your kids can see. These apps can also monitor areas of their lives you may worry about.

We have a lineup of the best parental control apps. Here are a few things these apps can help you with:

70% of parents have spoken to their child about cyberbullying

Online safety isn’t just about protecting kids from harmful material; kids need protection from other people. Most parents have spoken with their kids about cyberbullying, but there’s a lot to understand about the topic.

Unfortunately, 31.47% of parents reported that their child has been cyberbullied, but it’s a problem that parents can help their kids resolve.

We’ve spoken more in depth about how to stop cyberbullying before it starts, but here’s a quick summary:

Here are a few tips on how to help if your kid gets cyberbullied:

Cyberbullying can’t always be avoided. But you can keep the conversation open to help your child understand how to protect themselves and others. By giving them skills to understand situations as they arise, you’ll support them beyond the limitations of technology.

Most parents have their own pandemic-related problems on top of their child’s remote learning, including staying on top of their working lives. The advancement and prevalence of technology has helped parents in some ways but makes their jobs tougher in other ways.

And, although most parents in our survey had another parent to help them out, nearly a quarter of the people we surveyed were single parents, making the blessings and burdens of child-rearing a solo effort.

Some parents give their children cell phones or wearable trackers to find them if they get lost or separated. It’s also a quick way to check in.

Whether you’re co-parenting or single, here are some extra tips for keeping your child safe online, even when you can’t be with them:

Safewise conducted a proprietary survey of 1,000 randomly sampled American parents via Pollfish. The results were tallied on January 20, 2022.