SimpliSafe vs. Blue by ADT

We researched and tried both SimpliSafe and Blue by ADT and found SimpliSafe had more security options.
Winner

When you compare Blue by ADT vs. SimpliSafe, SimpliSafe takes the prize. While we found both home security systems easy to use and affordable, SimpliSafe offered, well, more. It features a bevy of helpful security equipment options, the versatility of pro or DIY installation, and a better return policy than Blue.

Here’s how everything shook out after we tested and compared these two systems.

In the UK? Check out our SimpliSafe UK Review.

SimpliSafe vs. Blue by ADT at a glance

Not compatible with Z-Wave

SimpliSafe is best for people who want great connectivity

If you need a bunch of devices that all work well together, SimpliSafe is a good choice. It has a device for just about everything. From smoke detection to intruder detection, SimpliSafe has you covered.

And its security cameras are affordable, so you can get multiple cameras for your home. This can be particularly helpful if you have a large yard or home that needs a bunch of cameras for full coverage.

Blue by ADT pros and cons

Blue by ADT is for people who want a little extra reassurance that everything is going to work. It’s a highly trusted company with decades of experience. ADT has been around for more than 140 years.

Though the Blue version of ADT has only been around a few years, it’s still backed by ADT and its nine monitoring centers. These centers have generators and redundancy plans to ensure its customers never go without service.

Plus, Blue by ADT has a lower entry price, making it easier to get started if you’re on a budget.

(If you're not sure how Blue differs from ADT, check out our comparison of ADT vs. Blue by ADT.)

We love that both of these companies seem to look out for the customer. Both have no contract and offer inexpensive packages and monitoring.

Unlike some other big names in the industry (we’re looking at you ADT), neither SimpliSafe nor Blue make you sign a contract. While this means that you need to pay for your equipment up front, you won’t be locked into an agreement or pay a penalty if you decide to try a different security system company.

There isn’t much difference in price. Blue by ADT is slightly cheaper, but SimpliSafe offers more packages to choose from.

While Blue has more pricey professional monitoring, it has the edge overall. SimpliSafe provides the knockout in the equipment, installation, and return policy categories, though.

Both SimpliSafe and Blue offer low monthly monitoring-plan fees. What you get for the price is where the brands differ. Let’s take a look at SimpliSafe’s most affordable package and Blue by ADT’s only package. As you can see, you get what you pay for.

No
View on SimpliSafe

Yes
View on Blue by ADT

To get all of the features that the Blue by ADT plan offers, you’ll need to upgrade to SimpliSafe’s Interactive Plan for $27.99 per month. Since the premium package is less than $10 more, SimpliSafe and Blue by ADT are on even footing. We just want to make sure you don’t get fooled into thinking SimpliSafe is a bargain by looking at its lowest monthly package rate.

Both also allow you to go without a monitoring package, which we don’t recommend. Without monitoring, you lose too many features that make a security system useful.

You can learn more in our SimpliSafe monitoring packages guide. 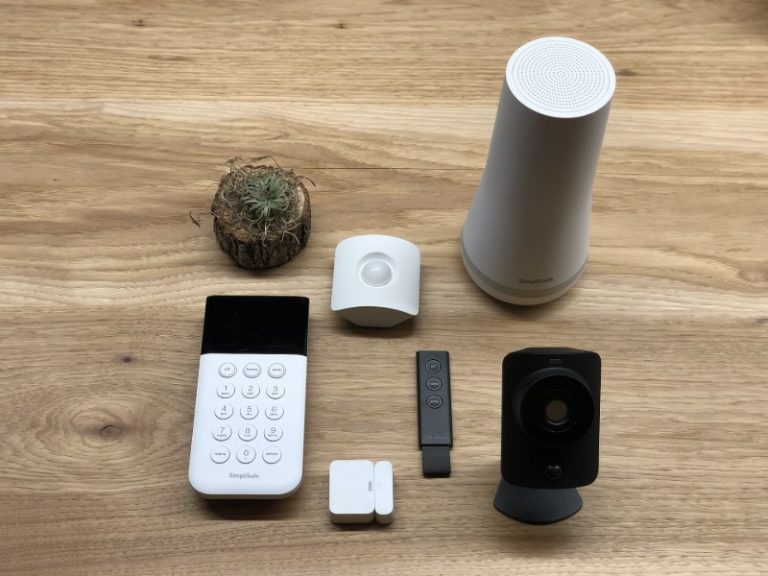 Learn more about SimpliSafe’s equipment and compatibility here, and learn how to connect SimpliSafe with Alexa if you want voice control.

Learn more about Blue by ADT’s equipment and compatibility here.

SimpliSafe and Blue are more evenly matched now that SimpliSafe added an outdoor camera to its lineup. But we're happier with Blue's camera quality.

Blue by ADT also has three security camera options, including an outdoor camera, an indoor camera, and a doorbell camera. Each offers 1080p video quality, which is the industry standard.

We've found SimpliSafe's cameras to be fairly basic. They'll get the job done, but Blue’s cameras inch above in our rankings with features like two-way talk and a slightly wider field of view.

Okay, so we’ve really talked up the Blue cameras, but they have one big problem. The price. Both the Blue Outdoor Wireless Camera and the Blue Indoor Camera cost $199.99, while SimpliSafe's outdoor cam costs $30 less. And the indoor SimpliCam comes in at just $99 versus the twice-as-expensive Blue indoor camera.

So how do the doorbell cameras stack up? They’re a little closer in price. The SimpliSafe Doorbell Pro is $169 and the Blue Doorbell Camera is $199.99. The features are similar too. Both have 1080p video, a wide field of view, two-way talk, and motion detection.

While both Blue by ADT and Simplisafe offer DIY installation, only SimpliSafe also offers professional installation. We like companies that give their customers choices. Some people like to dive in and install everything themselves, and others like to let someone with more experience tackle installing their home security system.

SimpliSafe’s installation fee is $99, which may make you want to try and install the system yourself. Installation is simple with both home security systems, so we don’t think you’ll have a problem. This guide to installing SimpliSafe will get you up and running in no time.

Interactive monitoring customers get a lifetime hardware warranty and a 10% discount on all equipment. We think that's a pretty good deal.

What happens if you choose your new home security system and find out you don’t like it? Well, both of these systems give you a window to return your equipment and get your money back.

Blue by ADT gives you just 30 days to get your money back on equipment and services. SimpliSafe gives you a 60-day window, which can give you more time to settle in, work out any bugs, and really get a feel for the equipment.

While SimpliSafe and Blue by ADT are both great security systems, we have to give this one to SimpliSafe. It offers more ways to protect your home with a wide range of devices. Plus, you have the option to choose DIY or professional installation and have more days to return equipment. We love options.

Still undecided? Read our full SimpliSafe and Blue by ADT reviews to learn more. Also, take a look at all our top security system picks, or SimpliSafe alternatives.

How we decided: Blue by ADT vs. SimpliSafe

When choosing the best home security system in our SimpliSafe vs. Blue by ADT review, we did hundreds of hours of research and hands-on testing. We combined that with decades of safety and security experience.

To learn more about how Safewise reviews products and services, check out our methodology page.