Home » Home Security » What Does the SimpliSafe App Do?

What Does the SimpliSafe App Do?

The SimpliSafe Home Security App is one of our favorite home security apps because you can easily share videos from your SimpliCam or Video Doorbell Pro on social media. You can also use it to arm your system, watch live video from your security cameras, and unlock your SimpliSafe lock without getting out of your chair.

While we liked this app overall for its easy-to-use, glitch-free features, one issue we had is that you must sign up for SimpliSafe’s most expensive monitoring plan for the app to be useful. If you self-monitor your system, the app has little to offer. It’s a little too basic too. Some of the features left us wanting more.

Here’s what we found when we tested the SimpliSafe app.

What You Can Do with the SimpliSafe App 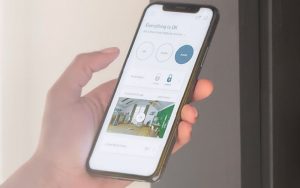 Is the SimpliSafe app free?

The app is always free no matter which store you download from.

How do I set up the SimpliSafe app?

After you download the app, setting it up is easy:

Once that’s done, it’s important to set up app security to prevent the wrong people from accessing your SimpliSafe system if you ever lose your phone:

From now on, the app will lock itself automatically after 10 seconds of inactivity. Only those with your PIN will be able to unlock it. If you choose to enable the biometric access option, you’ll also be able to use your phone’s fingerprint or face, voice, or iris recognition to unlock the app.

Users love the SimpliSafe app. It has close to perfect ratings on both the Apple Store and the Google Play store as of April 12, 2021.

Can you arm the SimpliSafe from your phone? 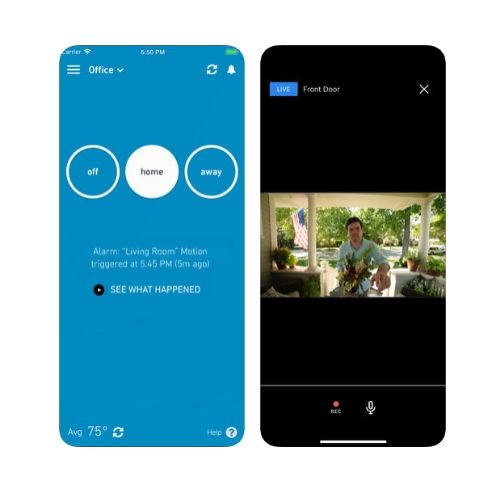 The SimpliSafe Home Security App lets you arm and disarm the system while you are at home, work, or anywhere else. This is a big win for those of us with terrible memories. You’ll never have to hurry back home to arm your security system again. We also love that you can use your phone to disarm the SimpliSafe security system before your hands get full carrying groceries, kids, or fur babies inside.

How to arm/disarm using your phone

To arm or disarm your security system just tap on the corresponding button at the top of the home screen.

Can you use the SimpliSafe app without monitoring?

You can use the SimpliSafe app without monitoring, but we don’t recommend it. Without a monitoring package, the app will do a limited number of functions.

Without a monitoring package you can:

Now that you know what you can do, here’s what you can’t do with the app if you skip monitoring:

What features does the SimpliSafe app have?

We’ve already talked about arming and disarming, but there are a few other things you can do with the SimpliSafe app:

The app is missing some features. For example, SimpliSafe’s doorbell camera technically has person detection, but the app doesn’t tell you when a person is detected. It only says “motion” on the alert, which makes person detection like every other motion alert. It does tell you when the doorbell is rung instead of just alerting you that it detects motion though, so at least you know when someone wants you to come to the door.

We also wish it had built-in AI like the Vivint app to sense when you’re home and automatically adjust your thermostat and turn lights on and off.

The SimpliSafe app doesn’t work with any thermostats or smart bulbs. And while you can arm the system using Alexa or Google smart speakers, that’s it. In fact, it has very few smart home integrations overall. Too bare bones for us.

Additional questions about the SimpliSafe app

Besides motion alerts, the SimpliSafe app will also notify you about smoke, fire, carbon monoxide, and water leaks. Even better, you can customize alerts to fit your needs.

You can arm and disarm your system and get camera notifications on your watch.

Yes, you’ll need to download the app through the Apple Store on your iPad.