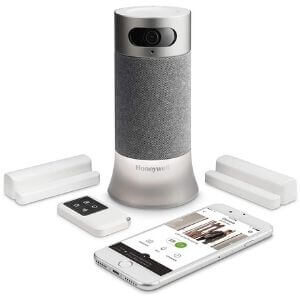 Honeywell has discontinued its Smart Home Security packages. Although we still found some for sale on Amazon, we recommend choosing a different DIY home security system to ensure you get tech support and app updates.

We'll be honest, Honeywell Smart Home Security (about $170) seemed like a good DIY security system in 2018, but time was not kind. Even after a massive drop from its original $450 sticker price, it can't keep up with competitors like SimpliSafe, Abode, and Wyze Home Monitoring—especially since it lacks professional monitoring.

Our three days researching this system were as follows: learn about a cool feature and then find out it's too expensive (paid cloud storage) or unimpressive (facial recognition). Overall, we think the system is good enough for most folks who want to self-monitor a security system, but better options are available—with and without professional monitoring.

Camera in the base station

Info current as of 02/12/2021. Offers and availability may vary by location and are subject to change. 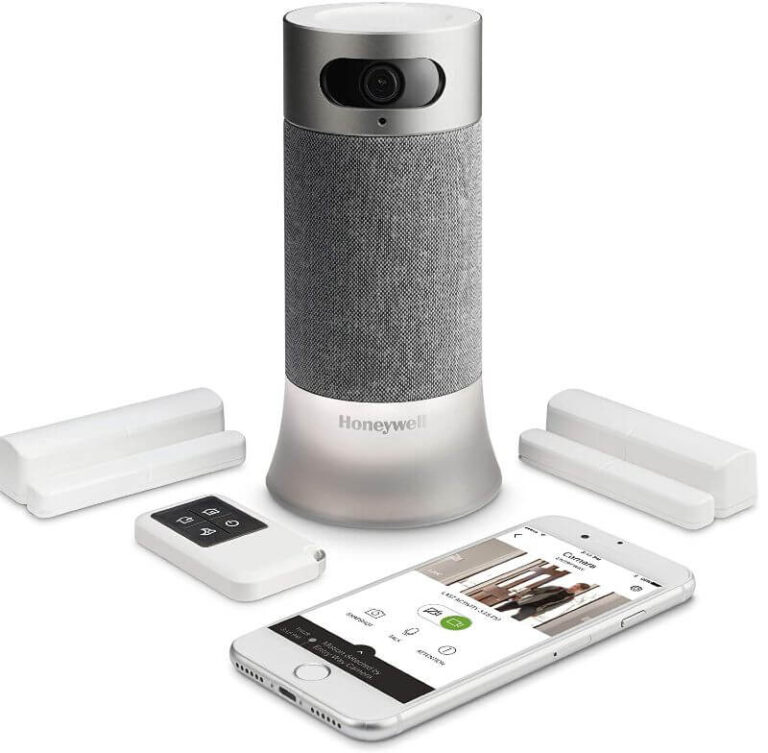 We weren't able to test Honeywell Smart Home Security in person, so we devoted our time to research as much as possible. Our primary focus was customer reviews, which helped us know what kinds of issues to look for and how practical the customer support is.

We also researched the Honeywell Home website to learn more about the product and evaluate the support resources. Ultimately, we spent about three days researching and writing our review. Check out our ranking ranking methodology for more information about how we review products and services.

Because the unit has Alexa, you can use it as an Echo smart speaker to play music, ask questions, and control smart home devices. Considering the device costs more than a standard Echo and doesn’t play music as clearly, this is underwhelming, but the Alexa speaker aspect is still secondary to its security functions.

The Camera Base Station has colored lights on the bottom to show you the system's status. Green lights show that the system is active in away mode, while purple indicates night mode (which only monitors door and window sensors). Other colors and regular flashes share additional information about your system.

Without professional monitoring, you need to stay on top of everything in your home. The system can help you know when to call for help, but the responsibility—and pressure—is yours.

The Honeywell Home mobile app works well enough but doesn't stand out compared to other security apps. It includes many useful features like arming controls, geofencing, two-way audio, and facial recognition. Of these, we like the geofencing for automatically arming and disarming the system as you leave or arrive at home. Geofencing isn't as revolutionary as it was five years ago, but it seems to be the best Honeywell Home has to offer.

Honeywell's facial recognition feature is cool in concept, but it has severe limitations. It doesn't store more than two faces and tracks those faces for just two hours each day, making for an underwhelming experience. We're not even sure if facial recognition could be helpful under these conditions.

Based on user reviews in the App Store and on Google Play, the app can sometimes be unstable, with Android users offering more criticism on average. A bright spot is that Honeywell Home's parent company—Resideo—takes an active role in addressing issues that users bring up in reviews. This is something we immediately saw when we started reading through user reviews.

Even without other recording modes, the camera allows you to set up custom zones to help you monitor a particular door, window, or high-traffic area. Setting up a zone can reduce false alerts from pets or ceiling fans. The motion-sensing feature also has an adjustable sensitivity setting to ignore small movements like a cat grooming on the couch in favor of larger actions like an uninvited guest walking through the room.

The video quality of daytime and night vision recordings is clear enough to distinguish details, but it's average among security cameras. We like that the camera has a privacy ring around the top that you can rotate to prevent the camera from recording video. It can keep the camera from slowing down your Wi-Fi network with unnecessary recordings.

Depending on how you arm the system, the Honeywell Smart Home Security can send a push notification to your smartphone or sound a siren to deter intruders.

The free cloud storage is useful, but its 24-hour video history is probably a bit too short for folks who don't want to peruse recordings once a day. If you want a more hands-off storage option, you can upgrade to a Honeywell Home Membership for significantly more storage.

Although the Standard Membership comes with 30 days of cloud storage, it covers only a single camera for $4.99 a month, which is pricey compared to single-camera plans from Arlo and Wyze that clock in at around $3 or less per month. Honeywell Home also lags behind competitors by restricting video clips to 30 seconds—even on the paid plan—instead of recording all activity from start to finish.

You can have unlimited cameras (and 60 days of storage) if you upgrade to the pricier Premium Membership for $14.99 a month, but that doesn't hold up to similar offerings like Nest Aware ($6 a month) and Ring Protect Plus ($10 a month).

Overall, Honeywell Home can't keep up with other competitors on cloud storage, which puts it at a huge disadvantage. We think a price drop or added features could close the gap, but it's not worth the extra cost for now.

Accessories in the starter kit

Although the Camera Base Station is the heart of the system, we like that you can link it to external accessories and sensors to improve your security. The starter kit comes with two such accessories—an access sensor and a key fob.

Depending on the size of your home and family, you can buy additional access sensors and key fobs. Compared to other security systems, these add-ons are comparable in price.

You can also expand the system with three other devices:

The Smart Home Security Outdoor MotionViewer pairs with your camera base station and allows you to place additional cameras around your home. It's a little pricey (around $200) compared to other outdoor security cameras with better recording capabilities, so you might consider something like the Ring Stick Up Cam or Arlo Essential Spotlight instead.

The Honeywell Home app is the foundation of Honeywell's smart home platform. It controls various Honeywell smart devices, including a Wi-Fi security camera, smart thermostat, and a water leak detector.

You can also connect to a few third-party smart home platforms like Amazon Alexa, Google Assistant†, and IFTTT (IF This Then That). Aside from arming and disarming the system, there aren't many ways to control the Honeywell Smart Home Security system with these platforms. But it's nice to bring the Honeywell devices under the umbrella of a larger smart home.

The Camera Base Station has a built-in Z-Wave radio, but it doesn't support all types of Z-Wave devices. That said, you can connect the unit to third-party light switches and smart bulbs.

This limited functionality hampers Honeywell's ability to compete with other Z-Wave-compatible hubs like Abode and Samsung SmartThings, which support hundreds of third-party Z-Wave sensors, switches, plugs, smoke detectors, and thermostats.

Installing the Honeywell Smart Home Security is a simple process thanks to step-by-step instructions in the Honeywell Home mobile app. In a nutshell, you create or sign in to a Honeywell Home account, plug in the Camera Base Station, connect it to Wi-Fi to set your preferences, and mount sensors in place before pairing to the base station.

Some printed installation documentation comes with the system, but it contains little information beyond telling you to use the app and some useful tips. Of these tips, we like the small sections on voice commands and what the different colors on the camera's LED base mean.

The support website has a great selection of Honeywell Smart Home Security articles. It can be challenging to navigate because it categorizes products like a search engine rather than putting all of the relevant items on one page.

The Twitter profile has a ton of activity, with representatives usually following up with customers within minutes. We especially liked that the representatives were knowledgeable and answered questions directly—without passing users on to the main support website by default.

On the whole, Honeywell Smart Home Security is a passable DIY security system. But its lack of professional monitoring holds it back from truly competing with brands like SimpliSafe and Ring Alarm.

We like the easy setup, strong customer service, and built-in Alexa capabilities. But the paid plans, limited facial recognition, and abysmal Z-Wave support keep it on the sidelines. Head over to our DIY security systems review to see some excellent alternatives.

The starter kit currently costs around $170 on Amazon, and there are no monthly fees to use it. But you can expand your cloud storage by signing up for a Honeywell Home Membership.

*Amazon.com list price as of 02/12/2021 at 10:37 a.m. (MT). Product prices and availability are accurate as of the date/time indicated and are subject to change. Any price and availability information displayed on Amazon at the time of purchase will apply to the purchase of this product. Safewise.com utilizes paid Amazon links.