Deals
Home » Home Security » How Does a Motion Detector Work?

How Does a Motion Detector Work?

Along with door and window sensors, motion detectors are home security system essentials. While door and window sensors notify you if someone actively enters your home, motion sensors will alert you if someone is prowling in or around your home. Though there are a few different types of motion detectors, most rely on similar technologies to detect intruders: they pick up on tiny changes—in things like temperature, vibration, or radiation—in the spaces they cover.

How do motion sensors work?

There are several types of motion sensor technology—active ultrasonic and passive infrared (PIR) are two popular options, though microwave, tomographic, and dual-technology detectors also get some market share.

An active ultrasonic motion detector emits ultrasonic sound waves that reflect off objects and bounce back to the original emission point. When a moving object disrupts the waves, the sensor triggers and completes the desired action, whether this is switching on a light or sounding an alarm.

Motion detection cameras, lights, and sensors used in home security systems generally rely on PIR sensors. These detect infrared energy, which humans and animals release as heat. If the motion sensor detects an increase in infrared energy, meaning someone has approached the sensor or walked within its range, it notifies the home security control panel and an alarm sounds. PIR sensors can be set to ignore small changes in infrared energy, so they won’t trigger an alarm if the family cat or dog walks by or if the household temperature fluctuates slightly.

Some other sensors use microwave or tomographic technologies, both of which emit waves of radiation—microwave and electromagnetic, respectively. When someone or something disrupts the radiation waves, the sensor sounds an alarm.

Dual-technology detectors are, as their name implies, sensors that rely on two different motion-detecting technologies to watch for movement. These are a bit more impervious to false alarms, as both technologies have to be tripped for the alarm to sound.

Check out our video doorbell buyer's guide to see the top models.

As motion sensors have a limited range—anywhere from 50 to 80 feet—you’ll want to place several around your home, especially in areas where people frequently walk, such as hallways, staircases, living rooms, and bedrooms. As a motion sensor may have a harder time detecting someone walking directly toward it, it’s better to place the device alongside a hallway where a burglar would walk parallel to it.

When deciding where to place each sensor, make sure they are at least 10 feet away from bright windows, radiators, and heating vents, as abrupt changes in temperature or HVAC-related airflow may trigger false alarms.

Take a closer look with our guides

Check out our comprehensive guides to motion sensor lights and motion sensors for in-depth installation information and much more.

Info current as of 06/10/2021. Offers and availability may vary by location and are subject to change.
Full ADT disclaimer 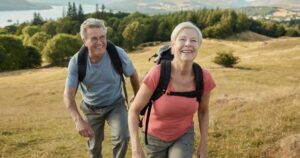