Home security apps help you protect your home when you’re not there by letting you check in on a smartphone or tablet. Read our reviews to find the best home security app. 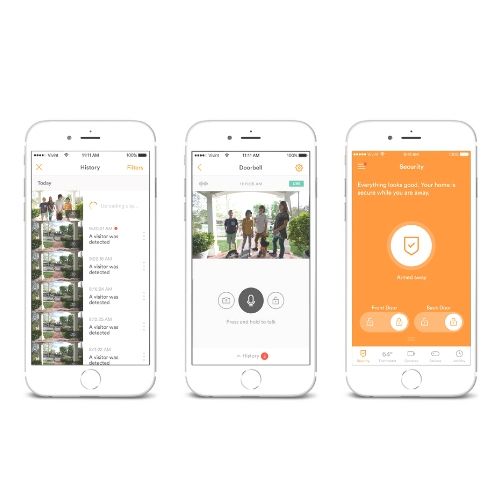 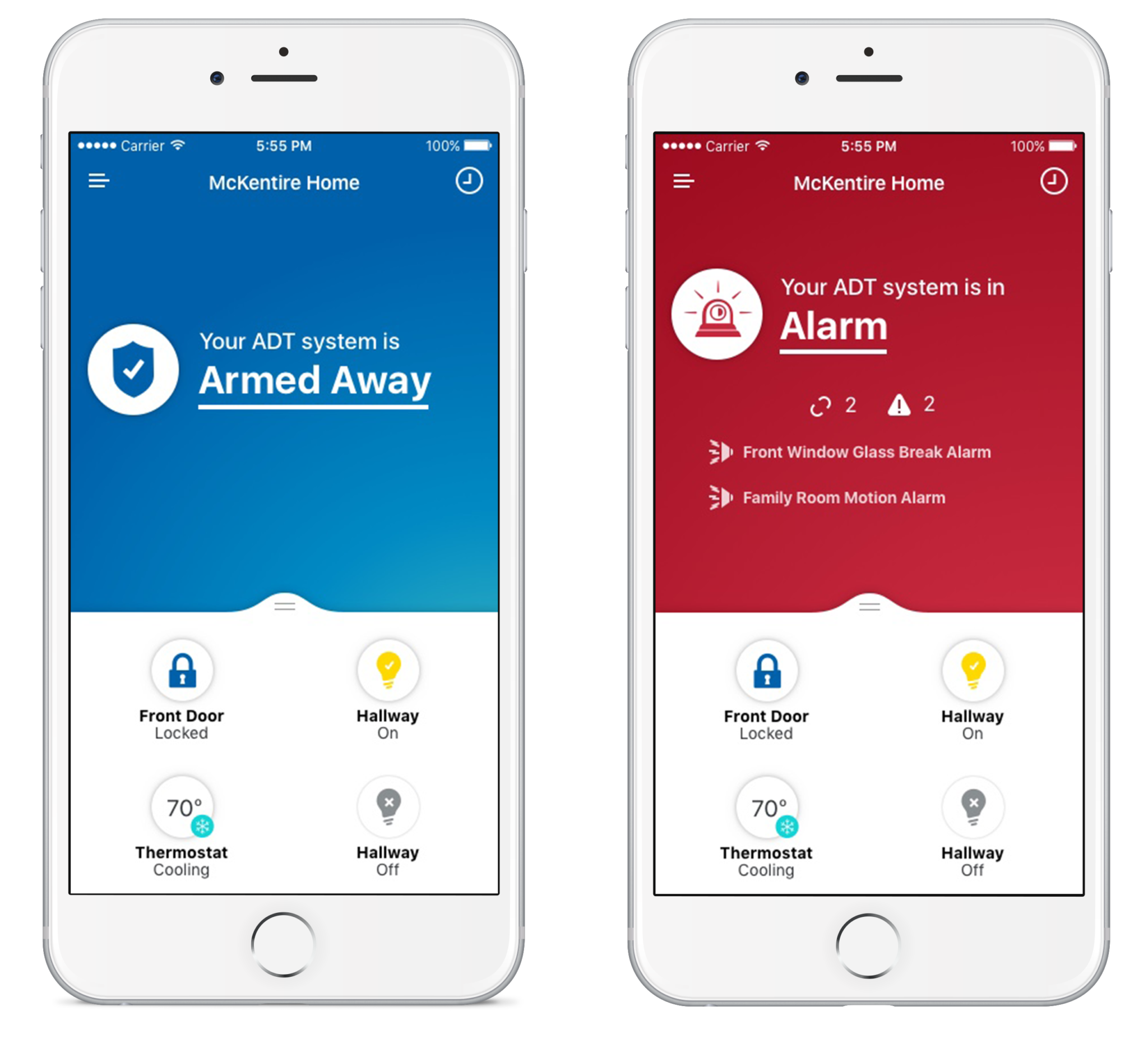 The Vivint Smart Home app makes it easy to secure your home and control smart home features from anywhere (like turning up the heat on the way home from the ski hill). Many home security system apps are compatible with smart home controls, but they usually require multiple apps to control everything.

With Vivint, you’ve got one app that does everything from arming your system to turning off the lights. And you don’t need to upgrade to a more expensive monitoring plan to get the app—Vivint includes it with every package. Here’s what you can expect to do with Vivint Smart Home:

Take a peek at the rest of our top contenders to see how they stack up against Vivint’s app.

You might think the only types of security system apps out there would be apps for Android and apps for iOS, but it gets a little more complicated. Here’s our guide to navigating the differences between proprietary and nonproprietary (Alarm.com) home security apps.

Proprietary apps are developed by security companies specifically for their own systems. Each company owns its app and is responsible for features, updates, bug fixes, and customer satisfaction.

App quality varies by company, but the benefit of a proprietary app is that it’s tailor-made for your system. Depending on the resources of your security company, app development can be slower than with a generic, industry-wide app.

Many companies forgo developing their own app and partner with Alarm.com instead. Alarm.com is a home security industry leader for both security equipment and the technology that supports it—including mobile apps. The Alarm.com app is compatible with a number of security systems and generally receives high customer ratings.

The downside is that updates and new features are dependent on Alarm.com and not your home security company, so some things like compatibility with new smart home devices can be delayed.

Other home security apps we considered

You’ll need to have a customer account with Vivint to use its app, but once you do, get ready for a slew of home automation functions. Adjust the lights so they’re bright when you pull in the driveway, turn down the heat while you’re at the office during the day, or unlock the front door for your kids if they forget a key.

Our favorite feature is the built-in AI assistant (Sky) that learns your routines and habits to help you manage your smart home right from your smartphone.

Sky uses geolocation and your home’s sensors to tell if your house is empty or full of a bunch of teenagers. It automatically adjusts the climate control to make sure the heat isn’t blasting when you’re out for the day (or when a crew of kids is upping the indoor temperature). Vivint Sky helps you conserve energy and stay comfy.

Plus, you can set up rules to automatically lock up the house at 10:00 p.m. each night and get an alert if a door or window opens after that time. If you’ve got rambunctious kids looking to exert a little too much independence, this feature could be a lifesaver.

What can you do with the Vivint Smart Home app?

The ADT Control app works with ADT home security systems and monitoring. It boasts a full lineup of home automation controls so you can remotely let the kids in after school or check to make sure you didn’t leave the coffee pot on.

We especially like the voice control options that come with the ADT Control app. It allows two-way talk and it works with Amazon Alexa. You can use voice control to arm and disarm your system—an option that isn’t always available from a security system app.

Unfortunately, the ADT Control app isn’t available with every ADT home security system. You can get the ADT Control app only with some of ADT’s pricier packages. But it does get high customer ratings in both the App Store and on Google Play, so the high price tag seems worth it to most users.

What can you do with the ADT Control app?

Frontpoint is the only security company on our list that uses Alarm.com technology for its mobile app. But Frontpoint has put in a lot of time to customize the app to best serve its customers.

A great example of this is the company’s DIY installation guidance. Frontpoint was one of the first home security companies to automate installation through a mobile app.

The Frontpoint app recently got a facelift, and users are raving about the simple, intuitive interface. The navigation menu is easy to follow, and the company has given more power to the individual user.

It used to take a call to customer service to change user settings, update login information, and make other standard changes. With the latest app update, those calls are no longer necessary—which is great news if you hate having to make phone calls (like me).

What can you do with the Frontpiont Mobile app?

SimpliSafe has taken the home security world by storm, and its proprietary mobile app is one reason why. Just like every other part of a SimpliSafe security system, the app is easy to navigate and intuitive for the user.

But that doesn’t mean SimpliSafe skips all the bells and whistles. The latest app update lets you share video from your SimpliCam or Video Doorbell Pro on social media.

We like this feature because we pick up more antics from our kids and pets than from potential intruders. Plus, all the best videos happen when the kiddos or puppies think we’re not watching.

But there are some quirks in the latest update that are frustrating—users complain about push notifications that won’t turn off and restrictions that let only one user receive alerts.

We are frustrated, though, that you can’t use the SimpliSafe app unless you opt for the company’s more expensive monitoring plan. This is an industry trend, but it feels extra stingy coming from a security brand that emphasizes its wireless prowess and budget-friendly prices.

What can you do with the SimpliSafe Home Security app?

Blue is ADT’s new DIY security system; you get its mobile app for free. If some of its features look familiar to you, it might be because Blue by ADT used to be LifeShield Security.

After ADT acquired LifeShield, it updated and rebranded the system. In fact, you’ll still see “LifeShield Security” right under Blue by ADT in the App Store.

Here’s a look at what you can do with the Blue by ADT mobile app:

Abode gave its app a complete overhaul. You get free access to the Abode mobile app when you buy an Abode smart security system or Abode Iota all-in-one security camera.

On top of a slick new user interface, here are other features of the Abode mobile app:

This one is an oldie but a goody. Pulse was ADT’s first mobile app for smart home automation and control.

Even though you can’t get the Pulse app as a new ADT customer, here are a few highlights for current Pulse users:

When it comes to apps that give you remote control of your home security system, it’s important to determine your needs.

If you’re ready to purchase or upgrade your system, read more about top home security providers to find the best match for your lifestyle.

Rebecca is the lead safety reporter and in-house expert for SafeWise.com. She has been a journalist and blogger for over 25 years, with a focus on home and community safety for the past six. Rebecca spends dozens of hours every month testing and evaluating security products and strategies. Her safety expertise is sought after by publications, broadcast journalists, non-profit organizations, podcasts, and more. You can find her work and contributions in places like TechCrunch, The Washington Post, The Chicago Tribune, HGTV, MSN, and an ever-growing library of radio and TV clips. Learn more